WASHINGTON — The buyer’s remorse about choosing Charlotte, N.C., to host President Trump’s nominating convention had already set in last January, months before the coronavirus would force both parties to rethink how to hold large-scale political events.

Sitting in the lobby of the Trump Hotel in Washington, D.C., that month, a group of Republican fund-raisers expressed concern that what could have been a high-octane celebration of Mr. Trump’s complete takeover of the Republican Party was going to fall short of expectations.

Convention cities are chosen well in advance of the event. But at that point, North Carolina was looking like less of a problem electorally for Mr. Trump than Florida, the president’s new home state, and one that he is uniquely focused on winning. And the North Carolina governor, Roy Cooper, a Democrat, was viewed warily by party officials as a hardball political player they couldn’t trust.

Now, after a high-stakes and public feud with Democratic officials in a state he won four years ago, Mr. Trump and the Republican National Committee are moving to largely shift convention proceedings, including the president’s acceptance speech on the final night, out of Charlotte. After a call with the R.N.C., state chairmen officially told delegates that they should hold off on purchasing airline tickets to Charlotte for the late-August event.

How the convention unraveled two years after Charlotte was selected is the story of an uneasy partnership between Republican officials and mostly Democratic leaders in North Carolina; a president who coveted a coronation and delivered an unyielding imperative to the state’s governor; and the extraordinary disruption from a global pandemic that transformed public life in the country. Once it became clear that health concerns over the coronavirus threatened the possibility of a full-throated celebration for the president, the fragile alliance buckled under the weight of partisan acrimony.

Charlotte’s willingness to host Mr. Trump’s convention was tentative from the beginning as leaders in the Democratic-leaning city grappled with whether they wanted an association with the president and what many in his party now stand for. After much public debate, the City Council approved hosting the convention by a one-vote margin, citing the economic benefits it would bring.

“There are a lot of liberal, establishment people here who just don’t like the Republican Party,” said Ada Fisher, a national committeewoman for the state G.O.P. in North Carolina. “People didn’t want it to happen just because Republicans were involved. But Charlotte can’t stand to lose $200 million in revenue right now.”

As the discussions between aides to Mr. Cooper, who is running for re-election this year, and Republicans have eroded, party officials are looking at a host of alternative sites. Governor Ron DeSantis of Florida has been making an aggressive pitch, talking specifically about the city of Orlando, though Jacksonville is currently a likelier location, according to a senior Republican official. While several other states are still being considered, Florida is the party’s top choice.

The news of the almost certain change in venue was delivered in calls to delegates last weekend, after Mr. Trump and Mr. Cooper reached a stalemate about what kind of social distancing regulations and safety protocols should be put in place inside the Spectrum Center to protect attendees from Covid-19. Mr. Cooper wanted to require social distancing and face masks, both of which are recommended by the Centers for Disease Control and Prevention. Mr. Trump, bristling that the terms of his own event were being dictated to him, wanted a full stadium with a pre-coronavirus look and feel, or nothing at all.

On a phone call with Mr. Cooper on May 29, Mr. Trump said he would not deliver a speech in front of a half-empty arena and that he wanted a quick answer on whether the state would accommodate him, according to two people familiar with the call. Mr. Trump asked Mr. Cooper what he should do; the governor said they should work to find a way to scale the convention back, one of the people said.

As the call wrapped up, the president reminded Mr. Cooper of the ways in which the federal government had come to North Carolina’s assistance during the peak of the coronavirus outbreak. “I think we’ve done a good job,” Mr. Trump said. “Testing, ventilators, we got you a lot, and that’s OK.”

“We’ve been good to you,” Mr. Trump added, according to one of the people familiar with the call, who spoke anonymously to discuss private negotiations. “We gave you the National Guard. We gave you a lot,” and said to Mr. Cooper, “You and I get along good. You’ve been nice to us about it.” 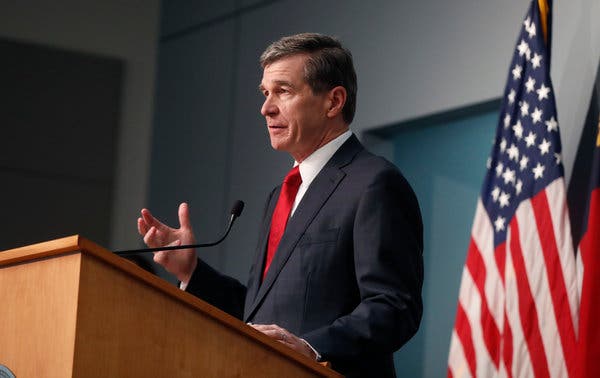 Gov. Roy Cooper of North Carolina, a Democrat, has said the convention could proceed with the requirements to wear masks and socially distance.Credit…Ethan Hyman/The News & Observer, via A.P.

Mr. Trump’s 2016 convention was marked by an eventual failed effort to deny him the necessary delegates to clinch the nomination. Raucous anti-Trump protest chants filled the floor the night before he addressed the convention, and one of his vanquished rivals, Senator Ted Cruz of Texas, delivered a floor speech in which he refused to endorse Mr. Trump.

One of the advantages an incumbent president typically enjoys is that he has years to plan the nominating convention, and Mr. Trump’s campaign has done diligent, behind-the-scenes work of shoring up support at the state party chair level to guarantee that 2020 would be an unmitigated celebration that stood in contrast to the discord of four years ago.

The party out of power, meanwhile, is typically forced to scramble amid intraparty disputes and the chaos of planning on the fly a large-scale event that is supposed to bring the party together.

Mr. Trump, however, has turned that formula on its head — unable to work out an agreement with the governor of a state he won four years ago, and showing little interest in finding a solution. That means that fund-raisers have to start from scratch, raising tens of millions of dollars for the host committee.

The high-stakes public fracas also underscores one of the biggest dynamics of Mr. Trump’s political identity — the disconnect between his role as an incumbent president and his role as a candidate. Mr. Trump is insisting on abandoning Charlotte because the governor wants attendees to follow guidelines set by the C.D.C. — which reports to Mr. Trump.

Delegates who paid $2,000 to the R.N.C. to cover four-days of events and party business have been told by their state party chairmen that the money could be reimbursed, and that whatever event does happen could be a shorter program than originally planned.

The coronavirus has upended the possibility of a full-throated celebration in Charlotte for President Trump’s nomination for a second term.Credit…Doug Mills/The New York Times

And the R.N.C., for now, is hoping to soften the blow to business owners in North Carolina by blaming the governor and trying to still keep a portion of the events in the state. “It is still our hope and desire to hold the business of the Convention in Charlotte but the Governor’s willingness to share his guidelines will need to occur to prevent this meeting from being an exercise in futility,” Ronna McDaniel, the chair of the Republican National Committee, wrote in a letter Friday to the host committee.

In some ways, the end of a traditional convention makes sense for Mr. Trump. “I look at conventions the same way as the State of the Union,” said Kevin Madden, a Republican strategist and former adviser to Mitt Romney’s presidential campaign. “The idea that conventions have this big, enduring impact is a relic of a campaign system of the past. Conventions are already a less important part of introducing a candidate and delivering that general election message.”

Mr. Trump, in particular, has demonstrated a consistent ability to shift the focus onto him, without the traditional set piece of a convention stage.

But the Republican Party risks losing something by shifting plans at the last minute, Mr. Madden said. “It could rob the party and the convention-goers of a well-organized, seamless experience that also serves as a clarion call for the party faithful heading into the crucial final stages of the general election,” he said.

Adding to the uncertainty surrounding the convention is the trepidation delegates are feeling about attending a crowded gathering. Already, states like Indiana are having difficulty filling both their delegate and alternate spots. Many convention delegates are over 60 and therefore more vulnerable to the virus.

Indiana, Vice President Mike Pence’s home state, has struggled to fill its slots with the party donors and activists who typically compete for the highly coveted positions to represent the state on the convention floor. Instead, people involved in the process said there have been submissions from unknown Republicans, and have expressed concerns that they don’t even know whether or not those people are pro-Trump. That risks upending years of careful planning on the part of the Trump campaign to ensure a smooth coronation-style convention for the president, with no dissent on the floor the way there was four years ago.

Kyle Hupfer, the state chairman in Indiana, said that his message to delegates was that “the R.N.C. and the president are committed to having an excellent program for the delegates and a great delegate experience. We are really adaptable as Hoosiers, and we will be there to support the president and our vice president, Mike Pence, whatever format that takes.”

Some state chairmen insisted that they were not aware of any anxiety on the part of delegates.

“Overwhelmingly, people were still interested in going,” said J.R. Romano, chairman of the Republican Party in Connecticut. “I feel bad for the people of North Carolina; this would have been an economic windfall for any community.”

Mr. Romano said he thought it was overly aggressive for Mr. Cooper to require attendees to wear face masks and practice social distancing. “We’re adults,” he said. “We all know the risks. If someone wants to wear a face mask, they can. If someone doesn’t, they’re taking a risk. I don’t think they had to make this mandatory.”