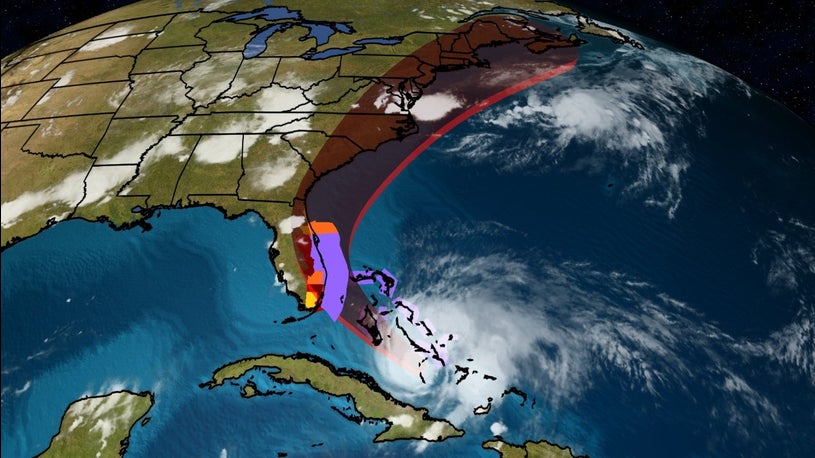 Hurricane Isaias (ees-ah-EE-ahs) is expected to strengthen as it tracks through the Bahamas into Saturday and then will move near Florida this weekend, before tracking up the East Coast as far north as New England next week.

A hurricane warning has been issued for a portion of Florida’s East Coast, from Boca Raton to the Volusia/Brevard County Line.

A hurricane watch has been expanded, now in effect for portions of Florida from north of the Volusia-Brevard County line to the Flagler/Volusia County Line, and for South Florida from Boca Raton to Hallendale County. A hurricane watch is typically issued 48 hours before the anticipated first occurrence of tropical-storm-force wind, conditions that make outside preparations difficult or dangerous.

Hurricane warnings continue in the northern and central Bahamas, including Nassau, Freeport and the Abacos Islands, where hurricane conditions are expected into Saturday.

For the latest on timing of these winds, see the impacts section following the forecast below.

Heavy rain triggered serious flash flooding in several areas of Puerto Rico. Just under 4.5 inches of rainfall was measured in San Juan on Thursday. Multiple fallen trees, mudslides and flooding was reported in southwest Puerto Rico, according to local emergency management. River flooding has been recorded by USGS gauges in several locations in Puerto Rico.

Below is a look at what we know about the forecast for any potential U.S. and Caribbean impacts.

The NHC projected path below shows that this system will likely be located near Florida’s East Coast this weekend. This is a subtle shift westward compared to previous forecasts.

Beginning next week, Isaias will then gradually move northeastward near the East Coast.

(The red-shaded area denotes the potential path of the center of the system. It’s important to note that impacts (particularly heavy rain, high surf, coastal flooding, winds) with any tropical cyclone usually spread beyond its forecast path.)

There are still a number of reasons for uncertainty in both track and intensity.

It’s still too early to precisely determine this system’s future track and intensity, with regard to the mainland U.S. and, therefore, potential impacts including rain, wind, and storm surge flooding.

A key question moving forward will be whether Hurricane Isaias’ eyewall scrapes along the coast in Florida or further north, or if the damaging and dangerous wall of wind will remain offshore.

Residents of Florida will remember that the eyewall of 2016’s Hurricane Matthew laid just offshore as it moved northward parallel to the Florida East Coast. Much of coastal east-central Florida received wind gusts of 60-80 mph, but Cape Canaveral, a section of land that juts out less than 15 miles into the Atlantic, received wind gusts well over 100 mph. These higher winds caused millions of dollars at NASA’s Kennedy Space Center. This is the difference between being in the eyewall of a hurricane vs. just outside of the eyewall.

Landfall in Florida may or may not occur, but remember that the eye of a hurricane is it’s least impactful zone.

Here is what we are actively figuring out right now:

The hurricane is forecast to battle somewhat unfavorable upper-level winds – producing what meteorologists refer to as wind shear – along its track from the Bahamas and beyond. This is usually a nemesis of tropical cyclones.

(Areas of clouds are shown in white. Areas of strong wind shear, the difference in wind speed and direction with height, are shown in dark purple. High wind shear is hostile to mature tropical cyclones and those trying to develop. Water temperatures are shown in red and with numbers in degrees, with anything over 80 degrees being favorable for development.)

However, warm water is plentiful near the Bahamas and the Southeast U.S. coast, a factor that would favor slow intensification.

These sum of these two competing factors should lean toward slow intensification as shown in the National Hurricane Center forecast.

The forecast track going forward leans heavily on steering features in the atmosphere – the Bermuda high and an upper-level dip in the wind flow over the Mississippi Valley. How strong Isaias is early next week also plays a role in its track.

There are also large uncertainties in how fast Isaias moves near the East Coast. Some computer model forecasts are faster, some a bit slower. So, the timing of all this may also change.

Isaias is expected to make a northward, then northeastward turn this weekend into early next week. But exactly when and how sharp that turn occurs will heavily influence impacts in Florida and along the East Coast. And that depends on the exact orientation and strength of those steering features.

(The Bermuda high and an upper-level trough over the Mississippi Valley may help guide the system in the Southeast U.S., assuming it survives until then. The potential forecast path from the National Hurricane Center is shown in red. )

The National Weather Service will be releasing extra weather balloons to help figure out these atmospheric steering agents in the next few days.

The NOAA Hurricane Hunters also sampled the environment around and north of Isaias Friday evening to help improve the forecast.

Planes from NOAA and the Air Force are sampling Isaias’ core to gain information on its intensity and track.

(Two planes from the Air Force and from NOAA are currently investigating Isaias to get information for a better forecast. )

For now, a forecast, near Florida’s east coast is expected, but could shift east or west as we gather more information.

From there it could pass near the Carolinas Monday, then sweep quickly near parts of the Northeast Seaboard as far north as New England Tuesday or Wednesday.

Isaias is expected to arrive near South Florida very early Sunday as a hurricane, and possibly central or northeast Florida Sunday afternoon. That would result in at least some rain, wind, high surf, and coastal flood or storm surge impacts in Florida this weekend.

As mentioned earlier, Isaias is producing strong wind gusts and bands of heavy rain over the northern and central Bahamas.

Conditions will gradually improve in the Central and Southern Bahamas and the Turks and Caicos through Friday as Isaias moves north.

Tropical storm conditions could occur as soon as Saturday morning in South Florida, but are expected by Saturday evening.

Remember, winds will be strongest near the coast and in the high rise buildings.

(The contours above show the chance of tropical-storm-force winds (at least 39 mph), according to the latest forecast by the National Hurricane Center.)

Here’s what the wind field might look like on Saturday evening with hurricane force gusts touching the coast of Florida.

Further north, here is an early look at when tropical-storm-force winds are possible.

For more on possible impacts in the mid-Atlantic and Northeast, see our discussion here.

Residents along the East Coast from Florida to Maine should monitor the progress of this system closely and have their plans ready to go, in case they’re needed.

A dangerous storm surge is also possible along Florida’s East Coast and in the Bahamas.

A dangerous storm surge of up to 3 to 5 feet, above ground level, is forecast from the National Hurricane Center, in areas where winds will blow onshore in the Bahamas.

Storm surge watches have been issued from Jupiter Inlet to Ponte Vedra, Florida, due to the possibility of inundation away from the coastline.

Swells generated by Isaias could begin arriving along the Southeast coast of the U.S. as soon as early Saturday, leading to high surf and the danger of rip currents. Surf will remain elevated through the duration until Isaias passes.

Life-threatening surf and rip currents are also expected in Florida into this weekend.

Rainfall of 4 to 8 inches is likely in parts of the Bahamas with up to 2 inches in portions of Cuba. Life-threatening flash flooding and mudslides are possible.

Two to four inches of rainfall is possible from southern Florida into east-central Florida Friday night through Monday, with isolated maximum totals of 6 inches, according to the National Hurricane Center.

Heavy rainfall may also spread into the eastern Carolinas early next week. For more on possible impacts in the mid-Atlantic and Northeast, read our latest discussion here.

(This should be interpreted as a broad outlook of where the heaviest rain may fall and may shift based on the forecast path of the tropical cyclone. Higher amounts may occur where bands of rain stall over a period of a few hours. )

Check back with us at weather.com for important updates on Isaias.

The Weather Company’s primary journalistic mission is to report on breaking weather news, the environment and the importance of science to our lives. This story does not necessarily represent the position of our parent company, IBM.

Tackling a Century-Old Mystery: Did My Grandmother Vote?

News DSMW - August 14, 2020
0
U.S. House of Representatives Speaker Nancy Pelosi said on Friday that Americans planning to vote by mail in the November election should do so early, alleging that the Trump administration will slow postal deliveries ahead of Election Day."I would say that if you're going......

News DSMW - August 14, 2020
0
President Donald Trump's younger brother, Robert, has been hospitalized in New York and his condition is described as "very ill," news outlets reported on Friday.ABC News said that President Trump was expected to visit his brother later in the day on Friday. A White House......

News DSMW - August 14, 2020
0
Dr. Anthony Fauci warned the death toll would be "enormous" if the U.S. allowed the coronavirus to run rampant in a bid to achieve herd immunity....
MORE STORIES