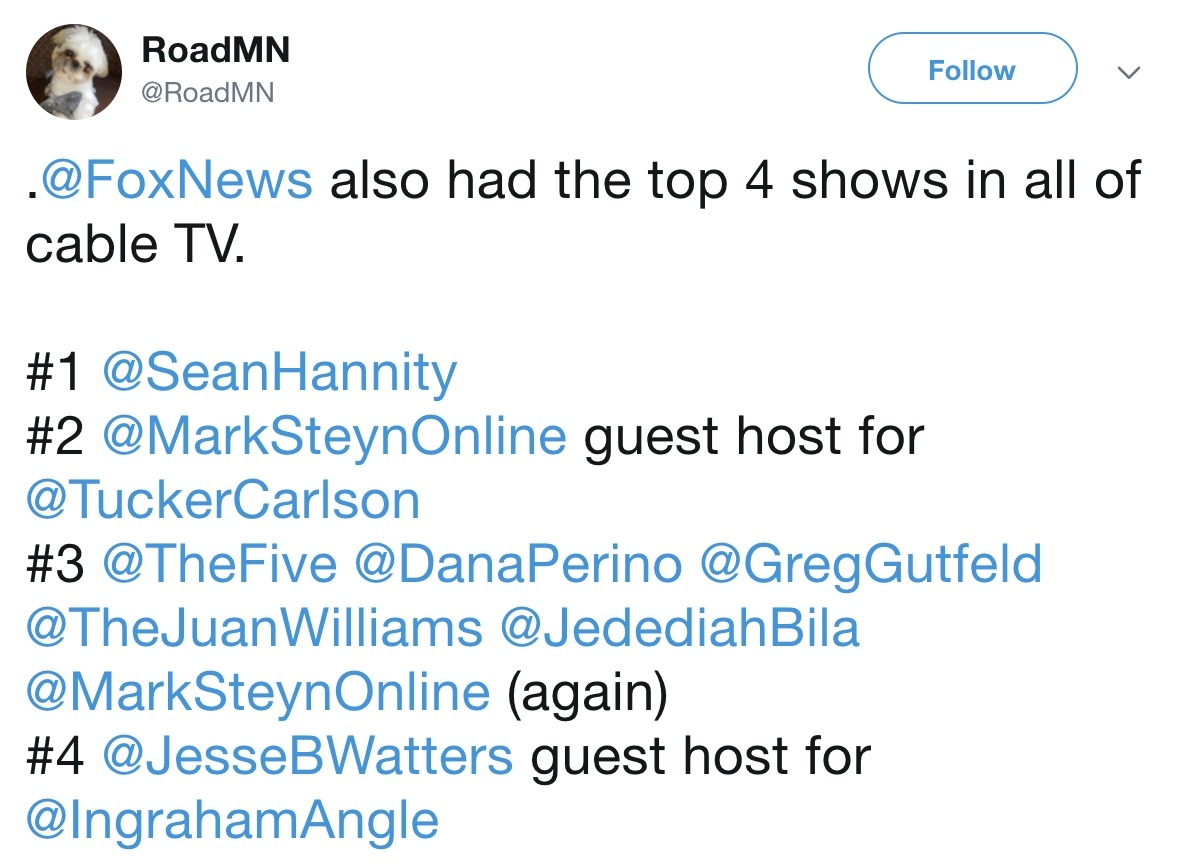 Tonight, Thursday, I’ll be back guest-hosting for Tucker live across America at 8pm Eastern/5pm Pacific – with a rerun at midnight Eastern. Hope you’ll dial us up!

As I’ve said before (indeed, as I testified in a recent judicial proceeding) the only thing a guest-host has to do is not lose the real host’s audience. So following Monday’s “Tucker Carlson Tonight” – which was the Number Two show in all cable – I was thrilled to find that on Tuesday I was part of two-thirds of the Top Three shows in all cable: “Tucker” was at Number Two, and my guest-co-hosting (or co-guest-hosting) stint on “The Five” came in at Number Three. As on Monday, “Tucker Carlson Tonight” clobbered our direct competition, with twice as big an audience as Chris Hayes on MSNBC and thrice as big as Anderson Cooper on CNN. That’s due primarily to Tucker’s team – the best production staff around – and to the many hours of attention to every grim detail of my ravaged visage from Cindy and Vincenza on hair and makeup. Thanks to all who tuned in, and we hope you’ll come back for tonight’s show.

On Wednesday’s “Tucker” we started with the increasingly violent attacks on ICE – the enforcement arm of US immigration. Click below to watch:

Victor Davis Hanson felt that the delegitimization of ICE was part of a very calculated Democrat strategy:

‘It’s almost as if they feel that these attacks on ICE offices might deter a little bit the purview of ICE and that might spike illegal immigration up a bit,’ he added. ‘I’m trying to be blunt, but I really do believe they feel that illegal immigration has flipped California, Colorado, New Mexico, Nevada, and it’s central to the future of the progressive movement. They are pretty open and candid about it.’

‘If it flips Texas they win the Electoral College now and forever,’ Steyn noted.

Next Lisa Boothe joined me to consider the phenomenon of Alexandria Ocasio Cortez – a national pin-up for Woke-Americans who can raise millions from Hollywood and Silicon Valley and Martha’s Vineyard …but only fifteen hundred bucks from her own constituents:

Then came one of the day’s wackiest developments – AOC’s war on Barstool Sports and its founder Dave Portnoy:

There were also new revelations in a couple of ongoing stories deriving from America’s dysfunctional federal justice system – the apparent suicide of Jeffrey Epstein, and the attempted Deep State coup masquerading as the “Russia investigation”. Tom Fitton of Judicial Watch addressed the latter:

We also had a mouthwatering montage of candidates and corn dogs. You can watch that segment here.

All that plus impeachment maneuvers in the courts, the Philadelphia stand-off, Tucker with Adam Carolla, and Al Gore as the first billionaire of the post-meat world: the full show is available here.

Mark Steyn Club members are welcome to weigh in below. As the third season of the Steyn Club gets into gear, we thank all our members in every corner of the earth. If you were waiting a couple of years to see if we were in it for the long haul, you can find more details about the Club here – and about our Third Annual Club Cruise, with me and my special guests bobbing about on the Mediterranean, here. Or, if you’re looking for a present for a Steyn fan, don’t forget our special Gift Membership.

See you on TV tonight at 8pm Eastern.