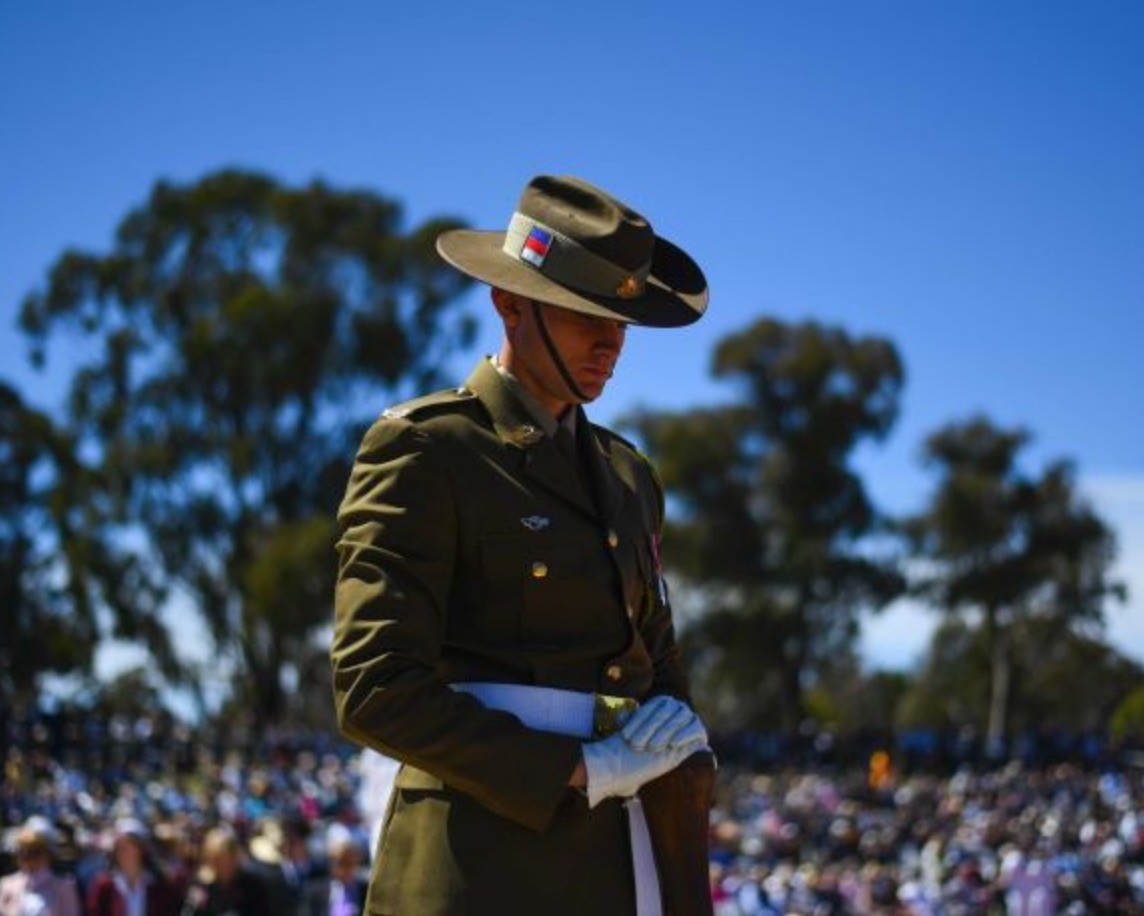 Today is Veterans Day in America, and Remembrance Day throughout the Commonwealth. It is also the anniversary of the moment the guns fell silent in what was the war that made the world we live in. With that in mind we present an encore presentation from the Mark Steyn Club anthology of video poetry.

Last year, on the hundredth anniversary of the end of the Great War, I read the most famous poem to come out of that conflict – though its author John McCrae, physician and soldier, did not live to see the armistice. In this video I discuss the background to the poem, and recite it, in front of a live audience from America, Canada, Britain, Australia, New Zealand and beyond at the Royal Canadian Navy’s home port of Halifax, Nova Scotia on last year’s Mark Steyn cruise. To watch (or hear) “In Flanders Fields”, prefaced by my introduction, please click here and log-in.

Steyn’s Sunday Poem is made with the support of members of The Mark Steyn Club, for which we’re profoundly grateful. If you’d like to catch up on earlier poems in the series, you can find them all listed in convenient Netflix-style tile format on our Sunday Poems home page. We will have a brand new poem for you next weekend.

~My book The Face Of The Tiger contains the column I wrote eighteen years ago – on the first November 11th after September 11th. It too leaned heavily on John McRae, and in the years since the ethos of the greying boomer quoted below has metastasized throughout the land:

On CNN the other day, Larry King asked Tony Blair what it was he had in his buttonhole. It was a poppy — not a real poppy, but a stylized, mass-produced thing of red paper and green plastic that, as the Prime Minister explained, is worn in Britain and other Commonwealth countries in the days before November 11th. They’re sold in the street by aged members of the Royal British Legion to commemorate that moment 83 years ago today, when on the eleventh hour of the eleventh day of the eleventh month the guns fell silent on the battlefields of Europe.

The poppy is an indelible image of that “war to end all wars”, summoned up by a Canadian, Lieutenant-Colonel John McCrae, in a poem written in the trenches in May 1915:

In Flanders fields the poppies blow
Between the crosses, row on row,
That mark our place; and in the sky
The larks, still bravely singing, fly
Scarce heard amid the guns below.

Row on row on row. And, in between, thousands of poppies, for they bloom in uprooted soil. Sacrifice on the scale McCrae witnessed is all but unimaginable in the west today — in Canada, in Britain, even apparently in America, which instead of sending in the cavalry is now dropping horse feed for the Northern Alliance, in the hope they might rouse themselves to seize an abandoned village or two, weather permitting.

Nonetheless, though we can scarce grasp what they symbolize, this year the poppies are hard to find. Three Canadian provinces had sold out by last Monday, and by the time you read this the rest of the Royal Canadian Legion’s entire stock of 14.8 million will likely be gone. That’s not bad for a population that barely touches 30 million and includes large numbers of terrorist cells plus those students at Montreal’s Concordia University who openly celebrated the attacks on the World Trade Center. Evidently, the public has made a connection between September 11th and November 11th, though no one seems quite sure what is: A general expression of solidarity with the victims? Or a renewed respect for the men who gave their lives so we could get fat and complacent and read celebrity features about Britney?

We are the Dead. Short days ago
We lived, felt dawn, saw sunset glow,
Loved and were loved, and now we lie
In Flanders fields.

This year, President Bush has declared the week of Veterans’ Day to be National Veterans Awareness Week, which is just a terrible name and makes America’s armed forces sound like a disease (“National Breast Cancer Awareness Week”). He’s also announced an initiative to get every school, in the week ahead, to invite a veteran to come and speak to students. A fine idea, but one likely to run into problems in a culture where not just tony bastions like Harvard but many less elevated outlets of academe decline to permit the ROTC on campus.

When Oxbow High School in the small North Country town of Bradford, Vermont mooted a JROTC program, the proposal was quickly shot down by the usual activists protesting JROTC’s policies on gays. (JROTC doesn’t have any policy on gays — that’s the problem.) “Being a teenager,” said one middle-aged graying hippy-dippy Vermonter, “is not about wearing a uniform and fitting in. It’s about standing up and declaring who you are.” There speaks the voice of the eternally adolescent Boomer in all its woeful self-absorption.

Actually, most Americans are already “aware” of their veterans, it’s the elites who need reminding — like the chaps at The New York Times and other big papers who carry (by my estimation) less than a tenth of the military obituaries Britain’s Daily Telegraph does. True, NBC’s star anchor, Tom Brokaw, has found himself a lucrative franchise cranking out books about “The Greatest Generation” — the World War Two generation — but Brokaw’s designation is absurd and essentially self-serving. The youthful Americans who went off to war 60 years ago would have thought it ridiculous to be hailed as “the greatest”. They were unexceptional: they did no more or less than their own parents and grandparents had done. Like young men across the world, they accepted soldiering as an obligation of citizenship, as men have for centuries. In 1941, it would have astonished them to be told they would be the last generation to respect that basic social compact.

They understood that there are moments in a nation’s history when even being a teenager is about standing up and declaring who you are by wearing a uniform. When we — their children and grandchildren — ennoble them as “the greatest” and elevate them into something extraordinary, it’s a reflection mainly of our own stunted perspective.

So for many of us “sacrifice” is all but incomprehensible. Responding to Robert Putnam’s recollections of “civic community” in World War Two — “victory gardens in nearly everyone’s backyard, the Boy Scouts at filling stations collecting floor mats for scrap rubber, the affordable war bonds, the practice of giving rides to hitchhiking soldiers and war workers” – Katha Pollitt in the current edition of The Nation sneers: “Those would be certified heterosexual, Supreme-Being-believing scouts, I suppose, and certified harmless and chivalrous hitchhiking GIs, too – not some weirdo in uniform who cuts you to bits on a dark road.” Somehow I don’t think poor paranoid Ms Pollitt has met that many fellows in uniform, weirdoes or otherwise.

To the broader constituency for which Katha speaks, those guys in uniform are weirdoes — not because they want to cut her to bits but because they’re willing to go and slog it out on some foreign hillside, getting limbs blown off by grenades, blinded by shrapnel — and for no other reason than something so risible as “love of country”!

Today, across the western world, the generals dislike conscript armies. They want light, highly trained, professional regiments. But it’s hard not to feel that the end of the draft — the end of routine military service — has somehow weakened the bonds of citizenship.

Citizenship is about allegiance. We benefit from our rights as citizens of the state and in return we accept our duties as citizens of the state. And let’s not be embarrassed about supposedly obsolescent concepts like the “nation-state”. If we’ve learned anything since September 11th, it’s that, if it were left to the multilateral acronyms — the UN, EU, even Nato — Osama bin Laden would have the run of the planet. The great evil of September 11th is being resisted by a small number of nation-states, by the United States, the United Kingdom and a handful of others. Ultimately, it is as Americans or Britons, Australians or Canadians that we resist the assault on our liberties.

But how do we play our part in this war? Hug your children, advised the President, and shop till you drop. Ask not what your country can do for you, ask what you can do for your outlet mall. But, for most Americans, that’s not enough. They’re ready to do more, and Mr Bush isn’t giving a lead. We may not be asked to scramble up over a trench and across a muddy field in Flanders, but it’s all too possible we may be called upon to demonstrate great heroism close to home, as the firemen of New York and the passengers of Flight 93 were. They are the Dead. They lived, felt dawn, saw sunset glow, loved and were loved. They did not deserve their premature deaths. But they join the untold legions who helped the Union win the Civil War, the Americans and the British Empire win the Great War, and the Allies the Second World War. And every single American alive today — including Katha Pollitt — enjoys the blessings of those victories.

Take up our quarrel with the foe:
To you from failing hands we throw
The torch; be yours to hold it high.
If ye break faith with us who die
We shall not sleep, though poppies grow
In Flanders fields.

In Thursday’s otherwise unsatisfactory speech, the President finally used the words he should have spoken a month ago, the last words of Todd Beamer before he and his ad-hoc commando unit took out the hijackers of Flight 93 at the cost of their own lives. And so Mr Bush ended his address by informally deputizing the citizenry: “We have our marching orders. My fellow Americans, let’s roll.”.

It’s not as poetic as John McCrae, but then, in the dust of Ground Zero, no poppies blow nor ever will.

~adapted from Mark’s book The Face Of The Tiger