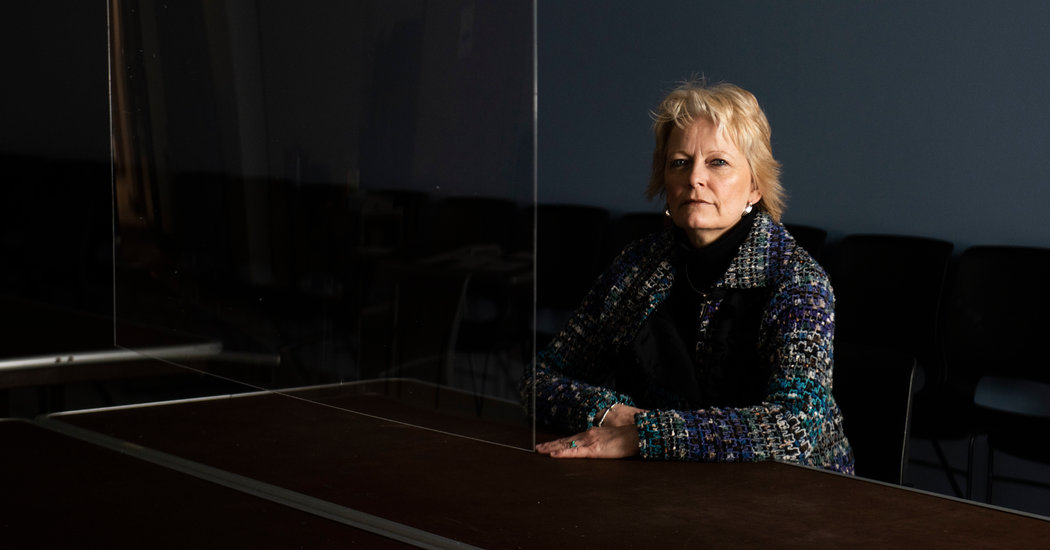 Angie Copas has high blood pressure and asthma, and her job as clerk for the village of Mattoon, Wis., does not provide health insurance. For weeks, voters have streamed into her office to request or cast absentee ballots, and she has no protective equipment, sanitizer or disinfectant wipes.

Next week, she’ll be facing hundreds more voters in person for Wisconsin’s presidential primary and other elections.

“I’m scared,” said Ms. Copas, 43. “On Election Day, we’re exposed to them and everyone they come across. I’m the only person in the office and I run it all.”

As Wisconsin moves ahead with its scheduled elections on Tuesday, which include both presidential primaries, a statewide Supreme Court race and local races, more than 1,850 municipal clerks and thousands more poll workers will be thrust into front-line positions in the nation’s struggle with the coronavirus.

These clerks and poll workers are overwhelmingly older. Some have health conditions that put them at greater risk. And while the state is organizing a last-minute blitz to distribute adequate protective equipment, few have received anything yet.

Running an election, suddenly, has become a choice between personal safety and maintaining democratic institutions.

As a result, poll workers have been dropping out by the thousands. As of Tuesday, roughly 7,000 had said they would not work, and 111 precincts did not have a single poll worker on the schedule, meaning that many locations could be forced to close. In response, Gov. Tony Evers, a Democrat, said on Wednesday that he would deploy National Guard troops to work at understaffed polling sites. Wisconsin law dictates that each site must have at least three election workers.

Clerks, however, have more of a duty to show up on Election Day, and many are responsible for training replacement poll workers. On Tuesday, 27 clerks signed a letter to Mr. Evers detailing their worries, including the health risks.

“Clerks, deputy clerks, election staff and volunteers have been working 24/7 these past two weeks to register voters and mail absentee ballots out to everyone who has made a request,” said the letter, written by Barbara Goeckner, a clerk from the village of Cambridge. “In doing so, all involved are putting themselves and their families at risk.”

Melissa Baldauff, a spokeswoman for the governor, said his office was aware of concerns and was trying to get protective equipment to offices across the state.

“Keeping people safe is the governor’s top priority,” Ms. Baldauff said. “He has also been very clear in his belief that our democracy has to continue.”

In plowing forward with its elections, Wisconsin remains an outlier on the primary calendar. Across the country, governors and lawmakers from both parties in more than a dozen states have postponed their primaries because of the pandemic. Many election days have been pushed back to June. The Democratic National Committee on Thursday postponed its national convention from mid-July to mid-August.

The gravest concerns are over in-person voting, which by its nature runs counter to the guidance from the Centers for Disease Control and Prevention to limit gatherings and stay at home. Indeed, Mr. Evers issued a “safer at home” order last week, instructing people to stay in their homes and shuttering nonessential businesses.

Yet despite the order, Mr. Evers and the Republican-controlled Legislature have pledged to move forward with the April 7 elections, noting that beyond the presidential primary, numerous local elections will also be held that involve transfers of power.

They have pointed to a surge in absentee ballot requests — now at 1.1 million — as an indicator that in-person turnout will be manageable. (Elections officials estimated in a court hearing on Wednesday that, in a normal election, that number would suggest that about 500,000 voters would still show up at the polls.)

On Friday, Mr. Evers eased his stance, asking the Legislature to order the election commission to mail ballots to every registered voter and extend vote-by-mail deadlines.

But Republican lawmakers dismissed his pleas as fantasy and vowed again to hold the election. Robin Vos, the speaker of the State Assembly, said he would be working at the polls on Tuesday.

The letter to Mr. Evers said that 50 clerks had responded to a message sent to a clerks-only email list asking them to share if they or family members had compromised health. The responses ran the gamut: Some people were cancer survivors or were currently undergoing chemotherapy. Others had diabetes, kidney disease or autoimmune disorders, or were taking immunosuppressants. Family members had lung disease, asthma, heart problems and a host of other issues.

Ms. Goeckner, who is in her 50s, does not have a spleen and donated a kidney eight years ago, said that while she was concerned about her health, she was more worried about her older colleagues. Her husband, who is also a clerk, oversees a 91-year-old poll worker who insists that she will show up on Election Day if voting takes place.

“We’re not listed as essential workers, but basically being considered essential workers,” Ms. Goeckner said. “We’re not complaining as clerks. I want people to understand the risk that’s being asked and the fact that I believe there are other safe alternatives to take in this stage.”

Across the state, poll workers have assessed that risk and are staying home. Karen Molitor, who described herself as “in the vulnerable category, over 65” and has served as a poll worker in Green Bay for the last 12 years, had planned on working until Tuesday, when she saw state guidelines recommending that people her age not work.

Heather DuBois Bourenane, the chief inspector for Sun Prairie, is in her late 40s and had begrudgingly planned to work rather than see her older colleagues show up on Election Day. But she is now wavering.

“Being complicit in putting public safety at risk seems a greater guilt to bear than letting democracy down,” she said. “That guilt should fall on the shoulders of our lawmakers.”

Her town is likely to consolidate eight polling locations into a single gymnasium, which could lead to larger crowds on Election Day. Similar situations are playing out across the state, in major cities as well as small towns. Milwaukee, which normally has 180 voting sites, announced on Wednesday that it would probably be able to keep only 12 or fewer open on Election Day.

The state election commission has been scrambling to get protective equipment to municipalities. Shipments of approximately 25,000 masks, along with plastic spray bottles, paper towels and alcohol-based hand sanitizer produced by Yahara Bay, a craft distillery in Madison, are scheduled to arrive at clerk’s offices across the state before Election Day. The state also sent more than one million ballpoint pens so voters can use their own pens to sign the poll book and mark a ballot.

To get supplies to clerks on time, the governor’s office said it took a state plane, stripped it of seats and began flying it around the state on Wednesday to drop off supplies.

But clerks still waiting for the shipments have been using an email list run by the Wisconsin Municipal Clerks Association to share tips and do-it-yourself solutions for making polling locations safer. Some locations have procured sheets of plexiglass: propped up vertically between two card tables, they can serve as a sneeze and cough guard for workers.

Shellie Benish, a clerk from the village of Black Earth, has proposed using plastic wrap to wrap some voting booths, laying it down on a surface where people fill out ballots and then discarding it afterward. And for early voting, she has been utilizing her office’s glass door.

“If someone does come in, we do not let them in,” she said. “We talk to them through the door. We have a table outside with the ballots. They fill it out, and then they slide it in underneath the door so that there’s no contact. We’re keeping that distancing, keeping our staff safe. We only have two in my front office, and they’re well over 60.”

Cathy Hasslinger, a clerk from Dunn, said she had been training her staff to follow state guidelines for a kind of safe-distance “dance” of checking identification and signing poll books. With taped markings on the floor, voters take two steps to the table, place their ID down, and take two steps back. Then a poll worker, standing two steps away on the other side of the table, approaches and picks up the ID for verification. This two-step continues for the whole voting process.

“We will be limiting contact, using hand sanitizer and doing our best, but there will be mistakes,” Ms. Hasslinger said. “The voters will follow instructions 90 percent of the time, but it will not have perfect compliance.”

Many clerks aren’t putting their hope in state officials who they believe are pushing forward with a dangerous election.

“We’re not opposed to holding the election,” said Diane Coenen, the president of the Wisconsin Municipal Clerks Association and a clerk in Oconomowoc. “But there was a better and safer way to do it, and we’ve asked for some of those measures to be put in place and we look to our leaders for that — but that has not happened.”

She lamented that state officials had not moved to conduct most voting by mail, and that deadlines had not been extended.

“We have a lot of clerks out there now with compromised health, yet they have to be with the public,” Ms. Coenen said. “Either their health is compromised or they have loved ones at home that are compromised, and the association would be devastated if we lost one of our clerks to the coronavirus.”