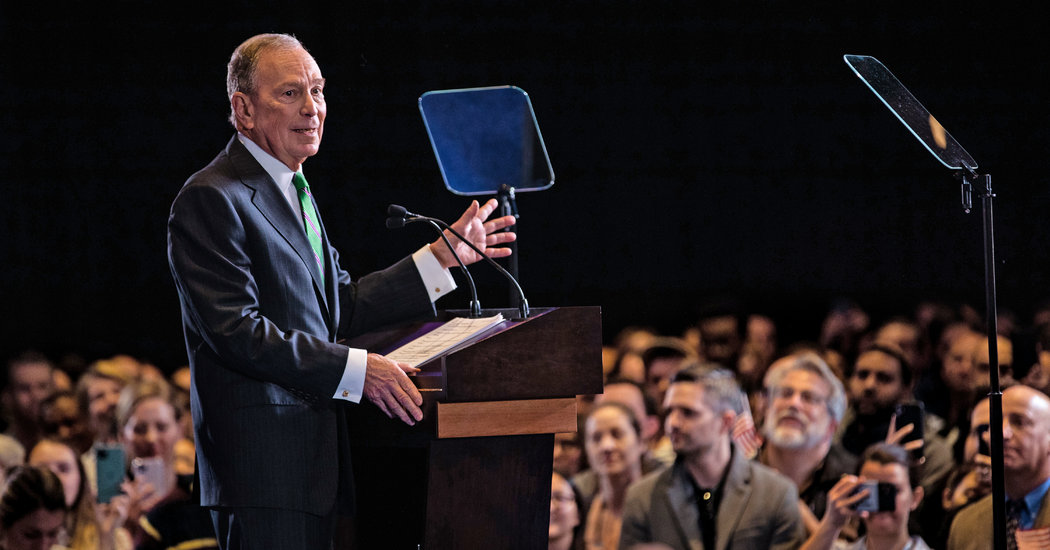 Michael R. Bloomberg on Friday abandoned plans to form a new super PAC for the presidential race and employ his campaign organizers through November, instead opting to give $18 million to the Democratic National Committee for the party’s battleground states program and disband the army of field workers he had assembled across the country.

The reversal — which came on the same day that election authorities reported he had spent more than $900 million on his campaign — prompted an outcry from former staff members, who said it was particularly startling for Mr. Bloomberg’s campaign to shatter their expectations of employment and health benefits in the middle of a major public-health crisis.

“I’m so sorry I worked for this guy. I thought he was totally different,” said Jane Conrad, a former field organizer for Mr. Bloomberg in Minnesota whom the campaign recruited away from her work as a union field representative in February. “He took me out of my job for his own gain.”

Mr. Bloomberg’s presidential campaign had promised at its outset that it would finance a field program through the November election, attracting staff members like Ms. Conrad with generous pay and benefits. Then, upon his withdrawal from the race earlier this month, Bloomberg officials said the former New York mayor would continue to employ some of his campaign’s field staff through an independent campaign organization.

In the end, Mr. Bloomberg, a multibillionaire, chose to do none of those things. He transferred $18 million from his campaign account to the D.N.C., which intends to use the funds to hire its own organizing staff in battleground states.

“While we considered creating our own independent entity to support the nominee and hold the president accountable, this race is too important to have many competing groups with good intentions but that are not coordinated and united in strategy and execution,” the Bloomberg campaign wrote in an unsigned memo.

The Bloomberg campaign had already paid rents through November for dozens of field offices in states expected to be competitive in the general election. Those offices will be transferred to Democratic state parties, which D.N.C. officials said would hire organizers using the money from Mr. Bloomberg’s campaign. The Bloomberg memo said the D.N.C. staffing would draw “in part from our own incredibly experienced and talented organizing staff.”

In a conference call Friday, about 1,500 former campaign staff members across the country — including some who had been laid off earlier in the month — were informed of the plans by the campaign’s states director and encouraged to apply to work for the D.N.C., though they were advised that, should they be hired, those jobs would carry different pay and benefits.

A set of interview talking points used by the campaign to hire field organizers over the last several months, seen by The New York Times, had included mention of “full health, dental and vision benefits” and “employment through November 2020 with Team Bloomberg.”

Those verbal promises were first tested on March 9, less than a week after Mr. Bloomberg exited the race, when many field organizers were laid off and told they would be paid through the end of the month. Employees were encouraged to reapply to work for Mr. Bloomberg’s organization in six battleground states: Arizona, Florida, Michigan, North Carolina, Pennsylvania and Wisconsin.

But on Friday, campaign employees in those states learned that they would not be working through the general election either. The Bloomberg campaign circulated a new survey to employees, inviting them to add their names to a list that would be forwarded to the D.N.C. for potential hiring. The deadline to fill it out was March 25.

There was no promise of a job. Applicants would “be fed into the competitive hiring process,” the message said.

“I spent all that time talking to people in my district, telling them we were going to be there through November — that was hammered into us over and over again,” said Dallas Johnson, who began working as an organizer in Minnesota for Mr. Bloomberg in January. “For the people who got let go today, there are other things they could have been doing,” he said, adding they had “pretty much zero job prospects of getting hired right now.”

Ms. Conrad, who took a leave of absence to join the campaign last month, said Friday that she would be unable to reclaim her job as a labor union representative before the end of the year.

She expressed particular concern about losing health care at the end of the month in the face of the coronavirus outbreak.

“I was looking to get ahead and pay off medical bills,” said Ms. Conrad, whose son has Crohn’s disease and takes immunosuppressant drugs. “Now I’m looking at falling further behind on them.”

Brynne Craig, a senior adviser to Mr. Bloomberg, said Friday morning that the former mayor remained determined to fund the campaign to topple President Trump. “We’re changing the mechanism, not our commitment,” Ms. Craig said, saying an independent-expenditure field program would be “not as effective” as one coordinated through the D.N.C.

But Mr. Bloomberg’s decision not to form a new super PAC represents an abrupt retreat from months of chest-thumping promises from some of his political advisers, particularly his campaign manager, Kevin Sheekey, who had boasted that the former mayor would end up either mounting the best-funded presidential candidacy in history, or funding the biggest independent-expenditure effort ever.

On Friday’s call with former campaign employees, Dan Kanninen, the campaign’s states director, communicated the decision to those it affected most directly.

“I know that for those of you who have primaries that have yet to come, ending so abruptly, as all campaigns inevitably do, is a really odd feeling for very different reasons,” Mr. Kanninen said, according to a recording obtained by The New York Times.

“I can’t emphasize enough how much things have changed in the intervening days since March 3, and even the days before,” he said, referencing the Super Tuesday contests in which Mr. Biden won decisive victories and Mr. Bloomberg won only the caucuses in American Samoa.

After Mr. Bloomberg ended his campaign on March 4, Mr. Sheekey said that Mr. Bloomberg was already in the process of trademarking a name for an independent-expenditure group.

But at the time, other Bloomberg advisers cautioned that the former mayor was still a long way from deciding exactly how he would spend his money in the general election, and that nothing could move forward without vetting by campaign finance lawyers.

Nearly a dozen other former campaign workers expressed frustration in interviews on Friday, saying the pay and promises of job security through November had been key reasons they joined Mr. Bloomberg’s long-shot campaign. They requested anonymity to speak because of nondisclosure agreements they had signed with the campaign and a desire not to jeopardize the remaining pay the campaign had promised them.

Some said they had completed the form sent out by the campaign on Friday, asking them to prioritize their interest in working in 14 different states for the D.N.C.

“It’s embarrassing to me, because I worked within my neighborhood,” Elle Zwicky, another former field organizer for Mr. Bloomberg in Minnesota, said Friday. “Now to go back to all these neighbors and friends and community members around me who hosted house parties, volunteered — that’s a breach of trust for the people that gave time and energy to the campaign, that I gathered, that I organized.”

Mr. Bloomberg is all but certain to remain a major funder of the Democratic Party, even in the absence of an organization under his direct control.

His $18 million contribution to the D.N.C., a figure that far exceeds individual limits, is legal, party officials said, because it is coming in the form of a transfer from the campaign. Individuals are allowed to make unlimited contributions to their own campaigns, and campaigns can make unlimited transfers to political parties.

The transfer is also not expected to be Mr. Bloomberg’s last huge contribution to the campaign against Mr. Trump: In recent weeks, he has also announced large donations to three major progressive groups — Swing Left, Collective Future and Voto Latino — and those checks are likely to keep coming.

“With this transfer from the Bloomberg campaign, Mayor Bloomberg and his team are making good on their commitment to beating Donald Trump,” said Tom Perez, the D.N.C. chairman. “This will help us invest in more organizers across the country to elect the next president and help Democrats win up and down the ballot.”

Though some of Mr. Bloomberg’s former campaign workers have turned their organizing efforts inward, saying on Friday they were consulting with employment lawyers and challenging the campaign’s message, others expressed resignation, citing the at-will employment contracts they had signed.

“I especially feel for people who relocated or left jobs or gave up job opportunities for this, and suddenly you find out the agreement is not there,” Mr. Johnson, the former field organizer said. “I worked as a contractor in my life, and when I took on a contract, you realize people might go bankrupt or things change. But this was a major hiring point.”