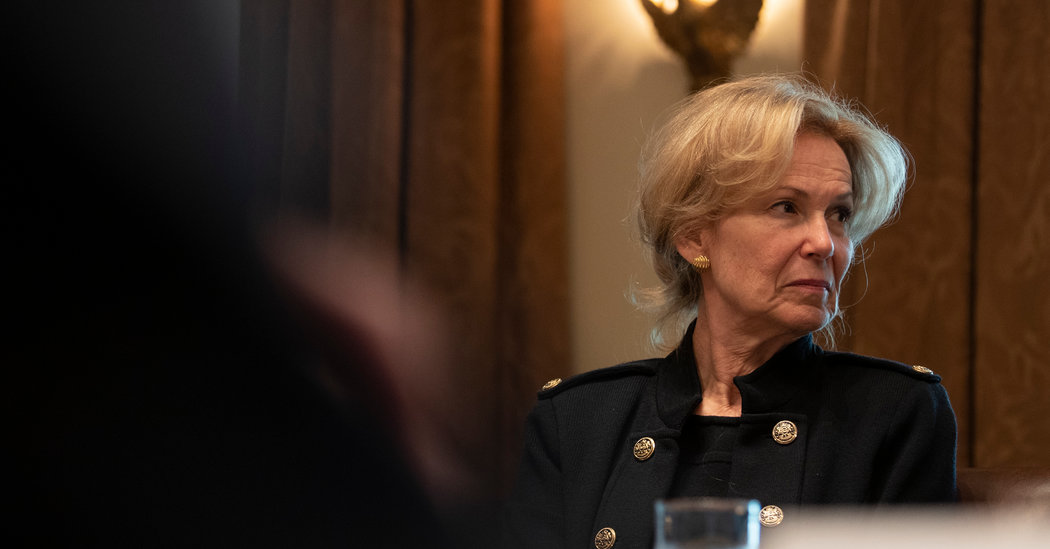 WASHINGTON — In the spring of 1983, even before the virus that causes AIDS had a name, a young Army doctor named Deborah L. Birx suffered excessive bleeding while giving birth. Moments before she passed out from pain, she screamed an order at her husband: “Do not let them give me blood!”

She may have saved her own life. The blood she would have received was later discovered to be contaminated with H.I.V.

“That was Debbie’s first brush with AIDS, and it literally changed her,” John Kerry, then the secretary of state, said in 2014, after President Barack Obama put Dr. Birx in charge of addressing the global AIDS epidemic. “It made her think hard not just about the perils of this new disease, but about her responsibility to fight it.”

Now, after researching H.I.V. and devising public health strategies to combat it for more than three decades, Dr. Birx has a new virus to fight. As President Trump’s newly named White House coronavirus response coordinator, she has the difficult task of tracking and orchestrating the government’s effort to contain the outbreak, while projecting a calm, authoritative presence to counter the mixed messages from Mr. Trump.

Vice President Mike Pence, who is overseeing the government’s response, introduced her as “my right arm.”

“There are lots of things that can go wrong here,” said Dr. Thomas Frieden, who worked with Dr. Birx when he ran the Centers for Disease Control and Prevention, and she oversaw the C.D.C.’s division of global AIDS. “It’s possible that we’ll look back in six months and say, ‘It’s not so bad, we overreacted.’ We just don’t know. But we wouldn’t want to look back in six months and say we underreacted.”

Unlike Dr. Anthony S. Fauci, another member of the coronavirus task force and the oft-quoted director of the National Institute of Allergy and Infectious Diseases, Dr. Birx — who carried the rank of ambassador at the State Department — is stepping gingerly into the public eye. She has taken pains not to contradict the president, praising the White House for its “energy and efficiency.”

That kind of political savvy helps explain why Dr. Birx is one of only a handful of Obama political appointees who is still working for the Trump administration. (Another is Dr. Francis S. Collins, the director of the National Institutes of Health.)

Dr. Birx faces multiple challenges, Dr. Frieden said. She must quickly gather information about the virus and how it is spreading to adjust the government’s response. She must ensure that decisions are “based on science rather than on political considerations,” he said. And she must “engage globally,” he said, “so we can tamp down the size of the pandemic in other countries.”

She has deep relationships with health officials around the world, Dr. Frieden said, but she is less familiar with the public health system in this country.

Tough and disciplined — she walks several miles to work each day to “clear her head,” one associate said — Dr. Birx is most often described as “data driven.” She is running what amounts to a coronavirus war room from the vice president’s office, meeting with government and public health officials and pharmaceutical industry executives to shore up beleaguered local health departments, scale up the production of coronavirus test kits and encourage research into antiviral medicines and vaccines.

“I think this administration is realizing that her credibility and the years of sweat equity and trust she has built up working with people on both sides of the aisle is arguably her best asset,” said Senator Ron Wyden, Democrat of Oregon.

For the past six years at the State Department, Dr. Birx has, among her responsibilities, overseen the Presidents’s Emergency Plan for AIDS Relief, or PEPFAR, created in 2003 by President George W. Bush when antiretroviral drugs saving lives in developed countries were not available in other nations.

In its first decade, the initiative focused on “priority countries,” offering broad public health programs to slow the spread of H.I.V., said Paul Zeitz, who worked for Dr. Birx for three years.

Dr. Birx, he said, concluded that it would be more effective to concentrate specifically on H.I.V. prevention and the treatment of infected people in areas where the epidemic was disseminating swiftly. She made difficult decisions to take money from “low transmission zones” and beef up spending in areas where the disease was spreading rapidly, using statistics as a guide.

“I saw her be very tough with country teams,” Dr. Zeitz said. “She wanted the facts about exactly what was happening with their epidemic, and if people did not have data in a way that it could be used, where it could be disaggregated by gender, by geography — and then she got all the way down to statistics for each medical clinic — they would have to go back to the drawing board.”

Dr. Birx also created a program known as DREAMS, a public-private partnership to reduce rates of H.I.V. among adolescent girls and young women. That demographic accounts for 74 percent of new H.I.V. infections among adolescents in sub-Saharan Africa, where the disease is most prevalent.

She was particularly outraged at the high rates of infections resulting from sexual assault, which was rarely reported, Ms. Talento said. She started working with churches to encourage young women to speak up.

“She was jumping around, waving her arms, ‘Listen, young women are suffering scandalously high rates of sexual assault,’” Ms. Talento said. “She would brainstorm and kick things around: What if we started ranking countries on how well they prosecute this, and tie the money to those rankings?”

Dr. Birx, a colonel in the Army, began her career in the early 1980s as an immunologist at the Walter Reed Army Medical Center. She spent part of her training as a fellow in Dr. Fauci’s lab, and “was a star then,” he recently told reporters, adding, “and what has happened over the years, she’s become a superstar.”

With the military committed to reducing the spread of H.I.V. in its own ranks, Dr. Birx was on the cutting edge of research. Shepherd Smith, an evangelical Christian leader and a founder of Children’s AIDS Fund International, said Dr. Birx and her colleagues at the Defense Department sometimes spotted epidemiological trends even before the Centers for Disease Control and Prevention.

“She had an early view of the epidemic that a lot of people in the AIDS issue didn’t have,” he said. “Between 1985 and 1988, the number of H.I.V.-positive African-American women in the military was greater than white men, so there were indicators where this epidemic was going.”

In 2005, Dr. Birx moved to the C.D.C., where she remained until Mr. Obama appointed her to the State Department. Eric Goosby, Dr. Birx’s predecessor at the State Department, said she was somewhat reluctant to leave her diplomatic post. The two spoke before she accepted Mr. Pence’s offer.

”The responsibility she carried involves hundreds of thousands of lives,” he said, adding that for Dr. Birx, it was a question of whether to “move away from something where you know you are dropping suffering and dropping death, to work on something that has the potential to be devastating but isn’t there yet.”