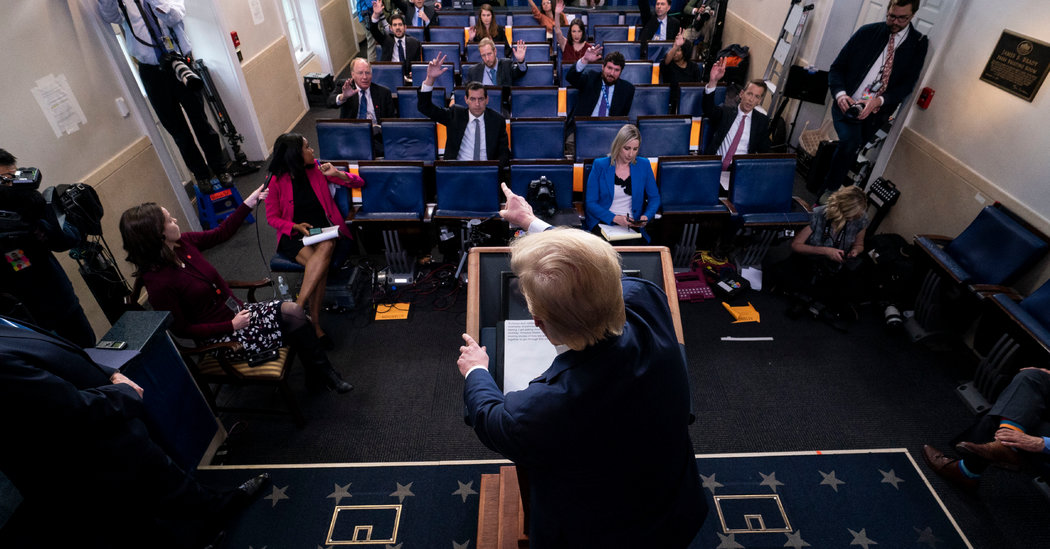 But when he was asked a bit later whether it was the right time to delay money for the health agency in the middle of a pandemic, he denied that he said he would. “I’m not saying that I’m going to do it,” he said during his news briefing on Tuesday. “But we’re going to look at it.”

“You did say you were going to do it,” a reporter pointed out.

Mr. Trump does not need adversaries to dispute his statements — he does that all by himself. In the course of his daily briefings on the coronavirus pandemic, the president has routinely contradicted himself without ever acknowledging that he does so. In the process, he sends confusing signals that other politicians, public health officials and the rest of the country are left to sort out.

Mr. Trump has always been a president of contradictions: a New York mogul fond of ostentatious shows of wealth who appeals to rural working-class voters. A populist whose main recreation is golfing at one of his exclusive clubs. A self-avowed deal maker who ends up mired in gridlock. A publicity hound who cannot get enough of the news media even as he denounces it as the “enemy of the people.”

That did not start when he arrived in the White House three years ago, of course.

Over his decades in the public spotlight, Mr. Trump has been a little of everything, whatever he felt he needed to be depending on the moment. He has switched political parties at least five times, proclaimed himself “very pro-choice” before becoming an ardent opponent of abortion rights, supported an assault rifle ban before casting himself as a vocal champion of the Second Amendment, proposed increasing taxes on the rich before cutting taxes on the rich and boasted of raunchy exploits with women before courting the evangelical vote.

But the advent of these daily briefings over the past month — sessions that stretch for an hour, 90 minutes or even two hours — have put the conflicts on display in a particularly stark way. The longer a briefing goes, it seems, the more likely the president is to waver from one message to the next. And then at the next briefing, the message may be different all over again, but always captured on camera and therefore difficult to deny or explain away.

The briefings have grown longer since they started, and Mr. Trump’s share of the time at the lectern has as well. Since mid-March, the average length of the briefings has grown from 61 minutes to 105, with the president’s speaking time increasing from 20 minutes per session to 53, according to Factba.se, an organization that collects and analyzes data on the Trump administration. In the course of 28 coronavirus events, Mr. Trump has spoken a total of 18½ hours.

The president’s words matter because, as he himself likes to note, the ratings for his briefings have been high, and for many Americans, they are the main source of their information about the pandemic.

His shifting assessments of the seriousness of the virus over recent months have been well documented. Initially, he likened it to an ordinary flu that would “miraculously” go away, then he later called it “the worst thing that the country has probably ever seen” and declared “war” against the virus. Then he aimed to reopen the country by Easter, before retreating and declaring “hard days” ahead.

The crossed signals over cutting finances for the W.H.O., however, showed that his contradictions can take place over the course of days or even within the same briefing. Only five days before vowing to review the health organization’s response to the pandemic, he blasted Congress for setting up a panel to review his own administration’s response to it, saying such an investigation “during a pandemic is really a big waste of vital resources, time, attention.”

During Tuesday’s session, he launched into a long broadside against the evils of mail-in voting, which he called “a very dangerous thing for this country.” Only after a reporter pointed it out did he acknowledge that he has mailed in votes himself — as recently last month for Florida’s primary.

How did he reconcile that? “Because I’m allowed to,” he said. “Well, that’s called ‘out of state.’ You know, why I voted? Because I happen to be in the White House and I won’t be able to go to Florida to vote.”

How is that different from others who cannot go in person or do not want to risk their health? To that, he said, “You get thousands and thousands of people sitting in somebody’s living room, signing ballots all over the place.”

The president has also swung radically in his views of governors and reporters, one day praising them, the next day castigating them. “I really think the media has been very fair,” he said at a briefing last month. By Monday, he no longer thought so. “I wish we had a fair media in this country, and we really don’t,” he said as he denounced one journalist as a “third-rate reporter” and called another one’s question “horrid.”

What remains unclear is whether Mr. Trump does not remember saying things that he later denies saying or is trying to impose his own reality. During a telephone interview last month with Sean Hannity on Fox News, Mr. Trump assailed Gov. Andrew M. Cuomo of New York for saying he needed 30,000 to 40,000 ventilators, suggesting that was exaggerated.

“I have a feeling that a lot of the numbers that are being said in some areas are just bigger than they’re going to be,” the president said. “I don’t believe you need 40,000 or 30,000 ventilators.”

When a reporter at a briefing three days later started a question by noting that “you’ve said repeatedly that you think that some of the equipment that governors are requesting, they don’t actually need,” Mr. Trump cut her off.

He has also pivoted back and forth in his view of China’s handling of the virus, which broke out there before coming to the United States. At first, he praised Beijing. “China has been working very hard to contain the Coronavirus,” he wrote on Twitter on Jan. 24. “The United States greatly appreciates their efforts and transparency.”

A couple of weeks later, he spoke with President Xi Jinping of China and afterward praised him as “strong, sharp and powerfully focused on leading the counterattack on the Coronavirus.”

But then in mid-March, after a Chinese official floated a conspiracy theory that “it might be US army who brought the epidemic” to China, Mr. Trump lashed out, referring to the “Chinese virus” and blaming Beijing for not being transparent, as he had previously said it was.

“It could have been stopped in its tracks,” Trump said of the virus at the White House briefing on March 19. “Unfortunately, they didn’t decide to make it public. But the whole world is suffering because of it.”

His team echoed the theme, from his secretary of state to his family. “Anyone praising China’s ‘leadership’ in responding that the virus should be scorned for being the authoritarian/communist propagandist that they are,” Donald Trump Jr., the president’s eldest son, wrote on Twitter on March 26.

Late that same night, however, his father spoke by telephone with Mr. Xi and then praised China’s leadership.

“Just finished a very good conversation with President Xi of China,” Mr. Trump wrote on Twitter an hour after midnight. “Discussed in great detail the CoronaVirus that is ravaging large parts of our Planet. China has been through much & has developed a strong understanding of the Virus. We are working closely together. Much respect!”

By Tuesday, though, China was the foil again as Mr. Trump assailed the World Health Organization for its handling of the pandemic — the first time he had raised the W.H.O. on his own in all of the coronavirus briefings. The W.H.O.’s main sin, in his view, was that it was too “China-centric.”

“Everything seems to be very biased toward China,” Mr. Trump said. “That’s not right.”

At least as of Tuesday.