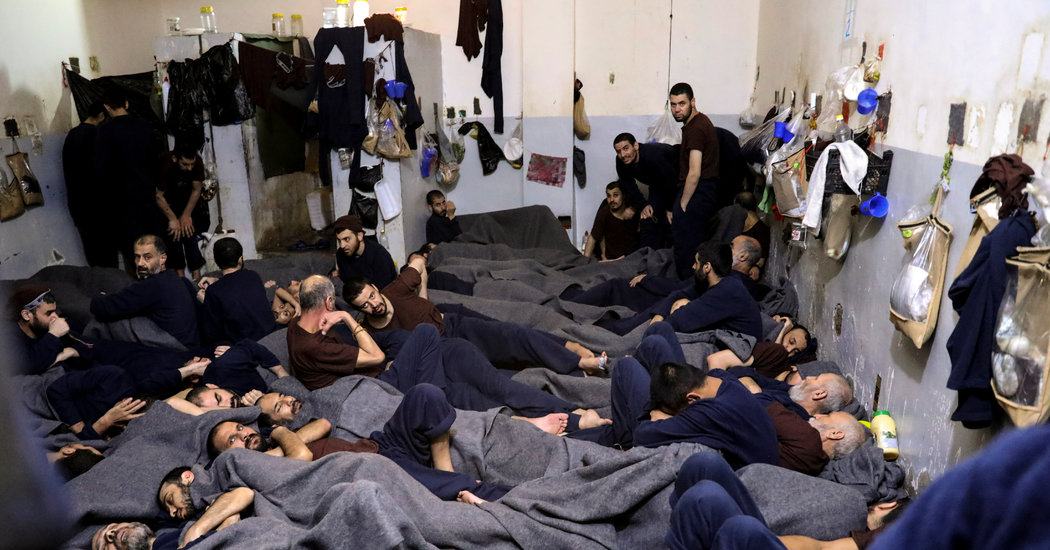 WASHINGTON — A year after American-backed forces seized the last remnant of territory under Islamic State rule in Syria, some 10,000 captured ISIS fighters in Kurdish-run wartime prisons pose “a significant risk” to the United States mission in the country’s northeast, military commanders say.

Hardened ISIS fighters protesting the dire conditions in their makeshift confines, including the potential spread of Covid-19, have rioted at the largest prison in Hasaka twice in the last two months. The uprisings were quelled, but they underscore the “high-impact risk of a mass breakout,” American commanders told investigators from the Pentagon inspector general’s office.

These findings, contained in the inspector general’s latest quarterly report on the U.S. military missions in Iraq and Syria, issued earlier this month, represent new and alarming warnings for an American counterterrorism mission that already faces renewed attacks from resurgent ISIS guerrillas, pressure from Russian troops supporting the army of President Bashar al-Assad of Syria, and concerns that the coronavirus could infect their own ranks.

These concerns have limited operations of the 500 remaining U.S. troops in northeastern Syria.

Only a handful of Covid-19 deaths have been reported in the country’s northeast, but humanitarian assistance workers express fear that a rapid outbreak is a real possibility given the region’s war-battered health infrastructure and the severe overcrowding at its prisons.

“The humanitarian situation in places of detention and in camps in Syria’s northeast was dire even before the threat of Covid-19 appeared,” said Fabrizio Carboni, the Near and Middle East director for the International Committee of the Red Cross. “We’re extremely worried about all detainees during this pandemic.”

Mr. Carboni added: “Their living conditions make them extremely vulnerable should the virus enter and spread. We know that overcrowded, unhygienic and poorly ventilated cells create the perfect conditions for that to happen.”

The Syrian Democratic Forces, whose fighters are the Pentagon’s partner on the ground in the yearslong campaign against the Islamic State, operate a constellation of about two dozen ad hoc detention sites for captive ISIS fighters, including converted schoolhouses and a former Syrian government prison at Hasaka, the site of the recent riots.

The prisons hold about 10,000 men, of whom about 8,000 are locals — Syrians or Iraqis — and about 2,000 are from 50 other nations whose home governments have balked at repatriating them. Scores of those men are Europeans, from countries like Belgium, Britain, France and Germany, but far more come from across the Middle East, including Egypt, Tunisia and Yemen.

Many European law enforcement officials fear that if they repatriate their extremist citizens, they would be unable to convict them or keep them locked up for a long time. Some countries have stripped suspected ISIS fighters of their citizenship. The scant repatriations that have taken place over the past several months — including by Kazakhstan, Oman and Tunisia — stopped altogether given Covid-19 restrictions, American officials said.

The Kurdish-led force that holds the ISIS fighters does not have the capacity to investigate or try them, American officials say. Western counterterrorism officials say the longer the foreign fighters are held, the more they become even further radicalized and the greater potential for mass breakouts.

The Kurds also operate more than a dozen camps for families displaced by the conflict that hold tens of thousands of people, many of them non-Syrian wives and children of Islamic State fighters. These include the sprawling Al Hol camp about 25 miles southeast of Hasaka, where some 70,000 people have been living in increasingly dire conditions.

Counterterrorism officials fear that these camps not only enable ISIS communications and financial networks, but are also ideological breeding grounds for the next generation of Islamic extremists.

That became clear in October, when the Turkish military moved into northern Syria after getting a green light from President Trump. Turkey targeted the American-backed Kurds, calling into question the Kurds’ ability to secure the ISIS fighters. About 100 fighters escaped in the turmoil, but Kurdish officials said they recaptured the majority of them.

Then came the riots at the prison in Hasaka, which holds between 4,000 and 5,000 captives. Media reports said that on March 29, ISIS militants began breaking down doors and digging holes in walls between cells. The rioting was brought under control the next morning, but violence erupted again with gunfire heard inside and ambulances called in to help the wounded.

Five weeks later, in early May, ISIS fighters briefly took control of the same prison. The riot ended a day later when Kurdish officials and members of the American-led coalition negotiated with the militants.

“ISIS prisoners significantly outnumber the S.D.F. guards, and the generally poor conditions in these jails are driving detainees to take greater risks to break out,” said Nicholas Heras, head of the Institute for the Study of War’s Middle East security program. “ISIS also has a longstanding policy to seek to break out its fighters from prison, which makes these S.D.F. facilities a focus of ISIS efforts to replenish its ranks in Syria and Iraq.”

Gen. Kenneth F. McKenzie Jr., the head of the military’s Central Command, told Congress in March that the detention of foreign fighters and ongoing attempts at radicalization in the displacement camps were parts of the same problem.

American and allied forces were helping to mitigate prison security risks by training and equipping Kurdish guards and helping construct more secure structures, General McKenzie said. But he called those efforts “a tactical-level Band-Aid, not a long-term solution.”

The Pentagon has increased the amount it will spend to repair, renovate and, beginning this year, build new detention structures, up to $20 million from $10 million, with a $4 million cap on any single project. The pandemic delayed site-survey teams from visiting potential locations, but Pentagon officials said initial construction of new prisons could start in the coming months.

In addition, the Defense Department is paying the Syrian Democratic Forces between $500,000 and $1 million in stipends for guard salaries and other costs, according to Pentagon officials. Kurdish leaders have expressed appreciation for the aid, but echo General McKenzie’s long-term assessment.

“Our allies must find a quick radical solution to this international problem,” Mazlum Abdi, the Kurdish force’s commander, said in a Twitter message after the first riot at the prison in Hasaka.