The single most Democratic congressional district in America could next be held by a Democrat who opposes abortion rights, has a history of endorsing Republicans and making homophobic remarks and ­is still considering voting for President Trump in November.

Welcome to the South Bronx, the domain for decades of the Rev. Rubén Díaz Sr.

Just a year ago, Mr. Díaz, a cowboy-hat-wearing Pentecostal minister and New York City councilman, was ignoring calls to resign his seat after saying the Council chamber was “controlled by the homosexual community.”

Now the former state legislator is seen as the front-runner in the 12-person contest, with Mr. Diaz’s recognition in the community delivering an advantage in a race where progressive alternatives are fracturing the vote.

His prospects in the June 23 primary have put Democratic officials on edge. If Mr. Díaz were to win, he would create a headache for the party and House Speaker Nancy Pelosi, handing an otherwise reliable Democratic seat to an apostate who would gleefully buck party leadership. 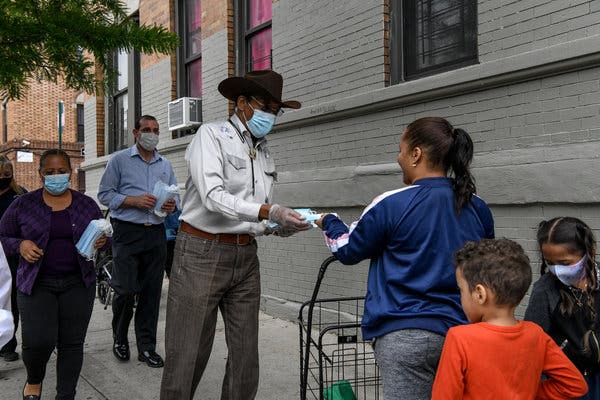 “Anyone nationally who is paying attention understands it would be an absolute embarrassment to the Bronx,” said Assemblyman Michael Blake, one of the other Democratic candidates and a vice-chair of the Democratic National Committee.

Ritchie Torres, a city councilman and another leading Democratic candidate, said it would be a “cruel irony” if a “Trump Republican” took over a district that delivered the highest share of the vote to Hillary Clinton (93.7 percent) in America.

“An insult,” said Melissa Mark-Viverito, the former speaker of the City Council and another candidate. “He defies everything I believe in.”

Yet Mr. Díaz is well known in the community, after his two decades in the City Council and State Senate. Even his fiercest critics acknowledged his knack for keeping his name front-and-center. (Witness the Rubén Díaz Apartments and Rubén Díaz Plaza.)

“He has an irreducible base of evangelical support which could serve him well in a crowded, cluttered, chaotic race,” he said.

Mr. Díaz may have another advantage: His son, Rubén Díaz Jr., is the widely popular Bronx borough president, a politician more aligned with the Democratic mainstream.

The younger Mr. Díaz has not endorsed his father, but the family connection may still help: Voters will only see the name “Rubén Díaz” on the ballot — no senior or junior moniker — leading to potential confusion.

Mr. Díaz did not respond to requests for an interview. He only sent a text message linking to a post from a Twitter account of a self-identified college student, with four followers, that cited a supposed poll showing him leading. (An actual poll circulated by the progressive group Data for Progress does show Mr. Díaz with a narrow lead, trailed most closely by Mr. Torres.)

The political crosscurrents at play in the race are far more complex, intense and intriguing than just whether Mr. Díaz will win and succeed Representative Jose E. Serrano, the nation’s longest-tenured Hispanic congressman, who is stepping down. In an overwhelmingly Democratic seat, victory in the primary is tantamount to being sworn into Congress.

The 15th Congressional District is roughly two-thirds Hispanic with a sizable African-American population, and race is an undercurrent of the primary. None of the 12 candidates are white.

Michael Blake, another contender for the seat, said he’s been told that a black candidate shouldn’t run in the heavily Latino district.Credit…Gabriela Bhaskar for The New York Times

The contest features a collision of two ambitious politicians labeled for years as rising stars in New York: Mr. Torres, a 32-year-old who became the first openly gay elected official in the Bronx and the youngest member of the City Council in 2014, and Mr. Blake, 37, a veteran of the Obama administration.

“On a daily basis, I am being told a black person shouldn’t be running here,” said Mr. Blake, who also has the backing of Tom Perez, the first Latino D.N.C. chairman, who offered a rare personal endorsement.

The primary was the first contested New York congressional race in which Representative Alexandria Ocasio-Cortez made an endorsement: She is supporting Samelys López, an insurgent candidate with the backing of the Democratic Socialists of America and the Working Families Party.

The district, which neighbors Ms. Ocasio-Cortez’s seat, will be a test both of how wide her sphere of influence is and how her brand of far-left progressivism plays in an area that ranks as among the poorest and the least white in the country. Ms. Ocasio-Cortez declined an interview request.

“If you go to a black church in the South Bronx, you are unlikely to come across an assemblage of Democratic Socialist revolutionaries,” said Mr. Torres, who labels himself a pragmatic progressive. “It’s a fact that the D.S.A. has the most robust membership in wealthier, whiter gentrified neighborhoods.”

Ms. López cast herself as a “grass-roots progressive offering a radical transformative vision.” With the Bronx ravaged by the coronavirus pandemic, all the candidates have been forced to mostly campaign from home, which, for Ms. López, is across the street from the Bronx Lebanon Hospital Center. “All I hear is sirens all day,” she said.

In backing Ms. López, the left-wing groups and Ms. Ocasio-Cortez bypassed Ms. Mark-Viverito, a progressive who supports “Medicare for All,” wants to decriminalize crossing the border and once toppled the party boss system to become the first Latino speaker in New York City Council history.

“I don’t know what to tell you,” Ms. Mark-Viverito, 51, said, noting that she had recently learned the term “cancel culture” on the left.

“If you are not 100 percent in agreement on every item, you’re just written off,” she said.

Ritchie Torres has more cash on hand than the other candidates.Credit…Gabriela Bhaskar for The New York Times

Mr. Torres cast the race as a two-person contest between him and Mr. Díaz, adding that “candidates with no real path are aiding and abetting the campaign of Rubén Díaz Sr.”

“If you have less money and less name ID than Rubén Díaz, your whole campaign is predicated on magical thinking,” Mr. Torres added.

Mr. Díaz’s campaign spending patterns seem unusual. For one, he has not listed a single full-time employee on his campaign payroll. For another, more than one-third of all itemized contributions — donations above $200 — came from fellow pastors and ministers.

Through March, the biggest share of his spending went to more than $22,000 in “constituent gifts:” baseball league trophies, back-to-school haircuts, Christmas toys and gift cards to the Western Beef grocery store.

Those kinds of constituent activities have helped Mr. Díaz weather a series of controversies and unusual stances for a Democrat.

He has said that black and brown communities are “plagued” by abortion clinics. In 1994, he said organizers of the Gay Games were “guilty of promoting sin”; he has endorsed Republicans, including Hillary Clinton’s Senate opponent in 2000.

He organized an anti-gay marriage rally in 2011 (and his granddaughter held a counter protest across the street); he praised Mr. Trump shortly before the 2018 midterms and he recently told The New York Post he was undecided about his 2020 vote; and last year he reportedly said he would not “rat” out colleagues for sexual harassment.

Mr. Díaz, whose persona is tailor-made to be amplified by conservative media, said last year that his opposition to gay marriage and abortion are rooted in his religion, not prejudice: “I don’t believe in gay marriage, but that doesn’t mean I hate people.”

Alphonso David, the head of the Human Rights Campaign, a leading national gay-rights group, said the organization was preparing to spend money to oppose Mr. Díaz and elect Mr. Torres, who would be the first openly gay black or Latino member of Congress.

Another super PAC, Bronx United, has sprung up with the explicit mandate to beat Mr. Díaz — without supporting a particular alternative. Eric Koch, a group spokesman, said Mr. Díaz would be a “destructive voice and major distraction” in Congress who “would routinely oppose key pieces of the Democratic agenda.”

Several of the candidates — Mr. Blake, Ms. Mark-Viverito and City Councilman Ydanis Rodriguez — already ran against each other last year for New York City public advocate in a test of their relative strength.

While Mr. Rodriguez finished far behind citywide, he actually was the top vote-getter of the three in the 15th district, carrying 26 percent to 23.5 percent for Mr. Blake and 19.6 percent for Ms. Mark-Viverito, according to an analysis by Steven Romalewski, a researcher at the Center for Urban Research at the City University of New York Graduate Center.

But Mr. Rodriguez’s campaign only had $8,000 in the bank at the start of April. Other candidates include Chivona Newsome, a co-founder of Black Lives Matter Greater New York; Tomas Ramos, a community center program director; and Frangell Basora, a former intern for Mr. Serrano.

Amanda Farias, who lost a 2017 race for City Council to Mr. Díaz in a multicandidate race and is running again in 2021, is worried history could repeat itself.