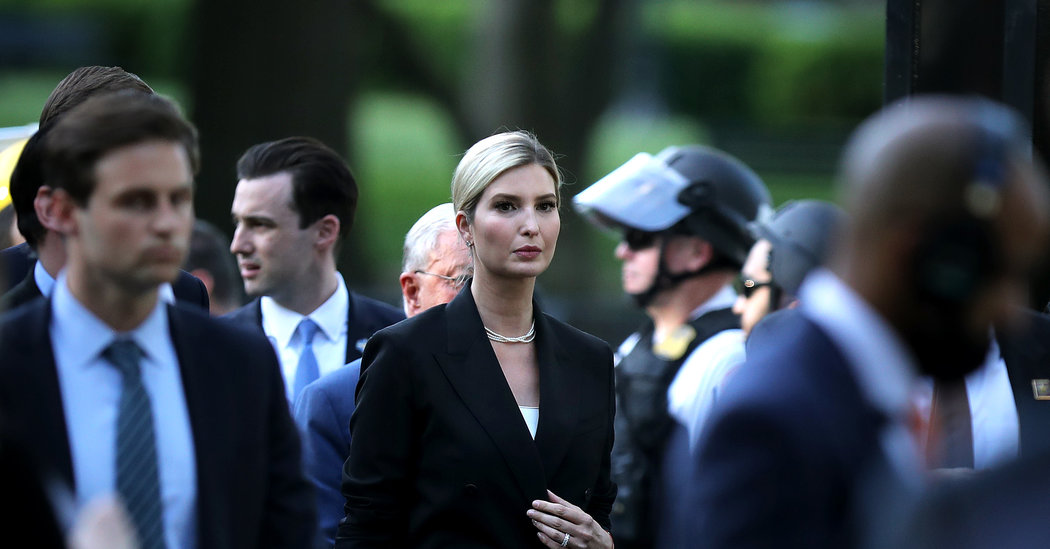 WASHINGTON — After a technical school in Kansas pulled a commencement speech recorded by Ivanka Trump, the president’s eldest daughter, she released the speech anyway and asserted that she was the victim of “cancel culture.” But those at the school who had led the charge against her said on Sunday that they had taken a stand against something broader: the divisiveness of the administration in which Ms. Trump serves as a senior adviser.

The controversy began Thursday, when officials at Wichita State University Tech decided to cancel the airing of Ms. Trump’s prerecorded speech at the virtual ceremony, scheduled for Saturday, after students and faculty members condemned the Trump administration’s handling of protests calling for justice for George Floyd, a black man who was killed in Minneapolis after a white police officer knelt on his neck.

“In light of the social justice issues brought forth by George Floyd’s death, I understand and take responsibility that the timing of the announcement was insensitive,” Sheree Utash, the school’s president, wrote in a statement on Thursday, the same day Ms. Trump’s speech was announced. “For this, I’m sorry that was never the intent, and I want you to know I have heard you and we are responding.”

Ms. Trump’s response to the college’s decision was to release the video anyway, prompting backlash that lasted through the weekend.

“Our nation’s campuses should be bastions of free speech. Cancel culture and viewpoint discrimination are antithetical to academia,” Ms. Trump wrote on Twitter on Friday, referring to the idea of snubbing a person or an institution over actions or remarks that are considered objectionable. “Listening to one another is important now more than ever!”

Ms. Trump’s comments on cancel culture, as well as her remarks in the video — “I’ve found that my greatest personal growth has arisen from times of discomfort and uncertainty,” she said at one point — were seized upon by critics who condemned her place as a senior adviser in the administration. President Trump’s response to the protests so far has been to threaten military force and call protesters “terrorists.” By Sunday, as snippets of Ms. Trump’s speech circulated on social media, the hashtag #ByeIvanka trended on Twitter.

Jennifer Ray, an associate professor at Wichita State University, which is affiliated with Wichita State University Tech, wrote and circulated an open letter that called for pulling Ms. Trump’s speech. Ms. Ray said in an email on Sunday that she, and the school, had encountered “huge backlash” over the decision to pull the speech.

“The Wichita community at large stands against the divisiveness spurred on by this administration,” Ms. Ray said. She disagreed that Ms. Trump’s First Amendment rights had been violated.

“Students were able to watch the address as an optional part of the commencement materials, and Ivanka was able to get her message out to the world through her own platform,” Ms. Ray wrote. “Our administrators made a brave decision to stand on the side of inclusiveness and solidarity.”

The White House and its allies defended Ms. Trump’s credentials to deliver the speech.

Secretary of State Mike Pompeo said in a statement on Sunday that Wichita State had missed a “rare opportunity” to showcase the school, adding that “the losers here are freedom of thought, the students and the central idea of universities as places of tolerance and learning.”

Ms. Trump has been by her father’s side throughout a week of unrest in Washington. Last Monday, Ms. Trump appeared with her father at St. John’s, a church near the White House that had been damaged by fire during a protest the night before. Law enforcement officers quickly cleared protesters from the area with riot control methods, including the use of chemical irritants, so Mr. Trump could pose with a Bible. Ms. Trump had urged her father to make the visit.

She has publicly voiced sympathy for Mr. Floyd’s family, writing on Twitter that “justice is how we heal.” But her speech, prerecorded in mid-May and largely focused on students graduating during the coronavirus pandemic, was not modified after Mr. Floyd’s death on May 25.

“You are a wartime graduate,” Ms. Trump said to students in the video, noting that their training prepared them “for exactly this moment.”

This year, Ms. Trump publicly transitioned to her father’s style of Republicanism, a signature tenet of which is the belief that conservatives are victims of discrimination. She was once viewed as a moderate who could mediate Mr. Trump on issues like climate change and parental leave, but in recent months she has made her stance clearer.

“I am a proud Trump Republican,” Ms. Trump said in an interview with The New York Times in March, discussing her political evolution and the role her father played in it. “I believe he’s broadened the reach of the Republican Party, which is really important to me.”