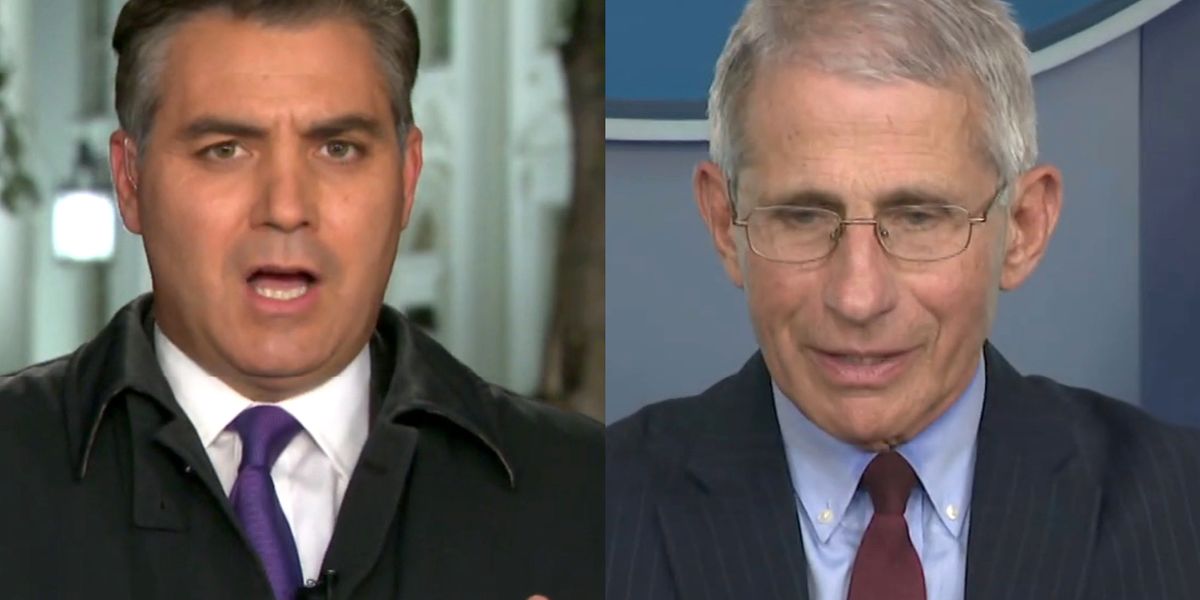 CNN reporter Jim Acosta asked if President Donald Trump failed to act quickly enough against the coronavirus pandemic to prevent as many deaths as possible, but Dr. Anthony Fauci dismantled the assumptions of his question instead.

“This may be an uncomfortable question, what would the models have looked like, that Dr. Birx and Dr. Fauci showed us, if we had started the social distancing guidelines sooner in February, or January, when China and South Korea were doing those sorts of things,” asked Acosta, referring to projections about coronavirus deaths.

“But remember this, and again I say that, and everybody says it, you know who says it better than anybody is Dr. Fauci, I had a decision to make, maybe it was my biggest decision,” he continued. “China was heavily infected, and thousands and thousands of people were coming from China to the United States, and against the wishes, and not even wishes, but they disagreed with the decision, I made a decision to stop China from coming in. Took a lot of heat!”

The president asked Dr. Deborah Birx to respond, and she explained that there was a lack of information from before the pandemic took off in the United States.

Dr. Anthony Fauci backed up Birx and gently scolded Acosta for seeking a sound bite that could be taken out of context.

“Just to underscore what Dr. Birx was saying, if there was no virus in the background, there was nothing to mitigate,” Fauci explained.

“If there was virus there that we didn’t know about, then the answer to your question is probably yes. Now the only trouble with that is whenever you come out and say something like that, it always becomes almost a sound bite that gets taken out of context,” he added.

“But I think that is very important what Dr. Birx has said, if there was covert infections here that we didn’t know about, and we mitigate them, then that would have made a difference,” Fauci continued.

“If there was nothing there then there’s nothing to mitigate, and I don’t know the answer to your question,” he added.

Acosta pressed for an answer based on testing that hadn’t been done.

“In a perfect world, it would have been nice to know what was going on there, we didn’t, but I believe, Jim, that we acted very very early in that,” Fauci concluded.

Acosta later said on CNN that he believed the president had changed his tone on the situation with coronavirus and that he was taking it more seriously than he had before.

Here’s video of the interaction:

[embedded content] Acosta to Trump: This may be an uncomfortable question … www.youtube.com