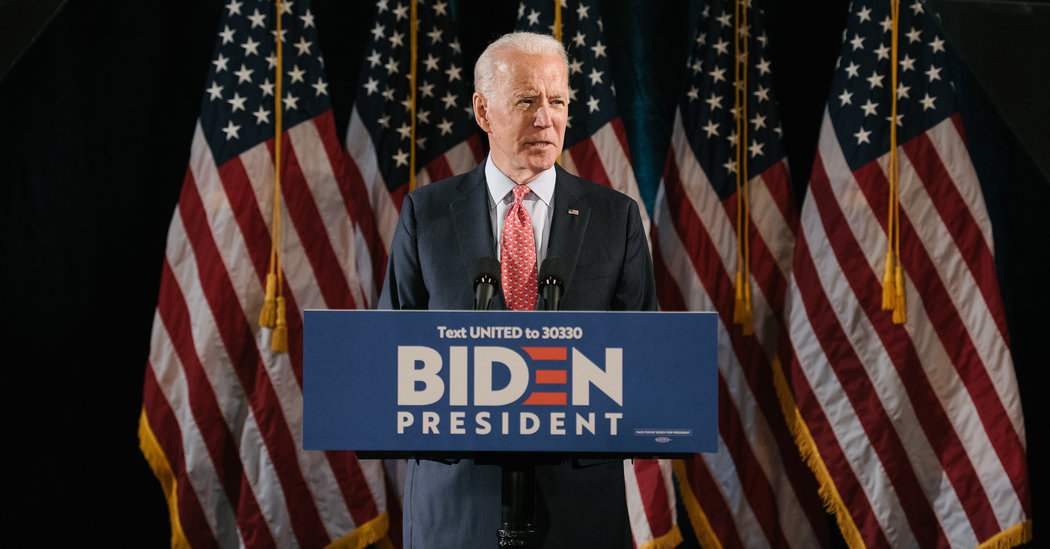 WASHINGTON — Joseph R. Biden Jr., confronting questions over his lack of visibility during a crisis that has upended the presidential primary, on Monday criticized President Trump’s response to the coronavirus as too slow and insufficient, and pressed him to act like the “wartime president” he says he is.

“Let me be clear: Donald Trump is not to blame for the coronavirus, but he does bear responsibility for our response,” Mr. Biden, the former vice president, said. “And I, along with every American, hope he steps up and starts to get this right.”

The speech, delivered via live stream from his home in Wilmington, Del., was his first appearance before the American public in six days. Mr. Biden, who holds a commanding lead over Senator Bernie Sanders of Vermont for the Democratic presidential nomination, has struggled to gain visibility during the crisis, a challenge made even more stark by Mr. Trump’s constant presence on television while the Democratic race remains essentially on hold.

The president has appeared daily at news briefings at the White House, events that drive television news coverage. Mr. Biden, on the other hand, did not appear on camera in front of the public for an extended stretch of time — from last Tuesday night to Monday morning — as the outbreak intensified. Now his team is scrambling to increase his presence online and on the airwaves: He is set to appear remotely on “The View,” for example, on Tuesday.

“The whole country is focused on one issue and one issue only,” said Teddy Goff, who served as a top digital strategist for the campaigns of President Barack Obama in 2012 and Hillary Clinton in 2016. “Certainly, it’s going to be very difficult to break through on other issues. But it’s essential for the person who’s highly likely to be our Democratic nominee to have a strong voice on this issue.”

Mr. Biden’s absence from public view has been the subject of taunts on Twitter, where hashtags like #WhereIsJoe have been used to skewer him, including by Trump campaign officials. His low profile highlighted a real political risk for his candidacy as the crisis worsens: Mr. Trump’s message on the virus, even if factually flawed or misleading, could seep in among American voters without being robustly challenged by Democrats, including by the president’s likely general election opponent.

“What I’m concerned about is that we see Donald Trump every day with this crisis giving his press report,” a donor said during a virtual fund-raiser with Mr. Biden on Sunday, according to a pool report. “And I would just love to see you more. Like, how do we get more of you and less of him on our airwaves?”

In an interview, Jim Margolis, a veteran Democratic strategist, described a challenging, multilayered balancing act with messaging that Mr. Biden must weigh in this moment: how to highlight a stark contrast in leadership style with Mr. Trump without appearing to politicize a crisis — Mr. Biden has “walked that line really well, but it’s hard,” he said — and how to break through at all when the nation is consumed with more immediate concerns than next November’s election.

The topic at hand — leading in an emergency situation, when deep government experience in government is an asset — plays to Mr. Biden’s strengths, said Robby Mook, who was Mrs. Clinton’s campaign manager in the 2016 election. At this moment of national anxiety, Mr. Mook said, it is “incredibly important for Biden to be part of the conversation.”

“Any time we’re talking about what it takes to be a commander-in-chief who has experience managing a national crisis, that’s a really strong place for Biden to be,” he said.

Earlier in March, Mr. Biden released a plan for addressing the virus, and his team has also been active in posting on social media about the subject. A video from the campaign featuring Ron Klain, a former chief of staff to Mr. Biden who was the Ebola response coordinator in the Obama White House, has been seen more than four million times on Twitter.

Beyond those efforts, Mr. Biden’s team has been working on improving his ability to communicate with the public, including by turning a room in his house into a makeshift television studio. He spoke on Monday from a lectern bearing a Biden sign, just as if he were on the campaign trail. In the backdrop were bookshelves along with a lamp and an assortment of framed photos.

The nation’s “focus, at least for the short term, is not going to be on the presidential race,” Mr. Margolis said. Still, he continued, “Four weeks from now, you have to make sure you’re engaging in a campaign that is going to be decided this year. He does not have the opportunity to sort of sit back and wait three months to see where the whole thing lands.”