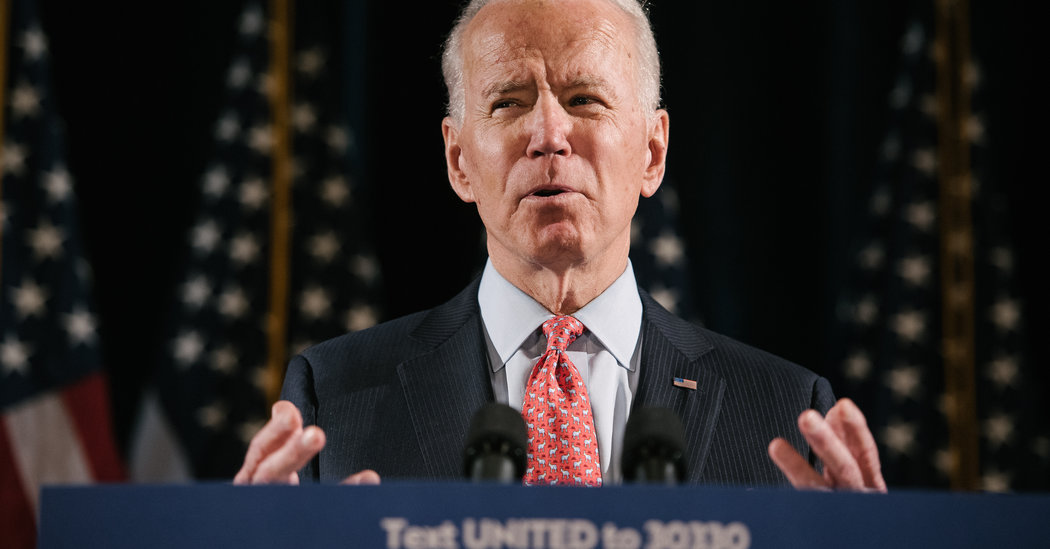 Former Vice President Joseph R. Biden Jr. has taken command of the Democratic primary for president despite running on a shoestring budget in a contest where Senator Bernie Sanders of Vermont raised more money in February alone, $47.6 million, than Mr. Biden had spent in his previous five months combined, new federal records show.

The latest disclosures from the Federal Election Commission reveal in stark detail just how badly Mr. Biden was outspent by his rivals before a decisive victory in South Carolina on Feb. 29 turned around his candidacy. Days later, Mr. Biden routed Mr. Sanders and others on Super Tuesday, and he has since built a nearly insurmountable delegate lead.

“These races tend to have a moment where the thing just breaks,” said Steve Schale, a Democratic strategist and executive director of a pro-Biden super PAC.

Outgunned on the airwaves and out-organized on the ground, Mr. Biden’s campaign succeeded in large part because of the overwhelming focus of Democratic voters on beating President Trump and the firm belief among many that Mr. Biden would be the party’s strongest challenger.

For months, Biden advisers had said they just needed enough cash to compete, and all the way through the end of February, Mr. Biden was racing to conserve that cash.

He spent only $13.1 million last month — less than the billionaire Michael R. Bloomberg was spending on average per day. During the same period, Mr. Sanders spent more than twice as much on digital and television ads alone as Mr. Biden spent on his entire campaign operation — his payroll, his ads, his consultants, his events.

In fact, Mr. Biden spent the least money in February of the seven candidates who had qualified to be on the debate stage. For the duration of the campaign, Mr. Biden ranks as only the sixth-biggest spender in the Democratic field as of the end of February. The weak fund-raising in Mr. Biden’s first 10 months as a candidate — he had only $12.1 million in the bank entering March — could be a concern for Democrats headed into a general election against President Trump’s campaign operation, which has steadily banked money for the last three years.

Mr. Trump’s campaign alone — not counting his joint operations with the Republican National Committee — reported more than $94 million still in his treasury at the end of February, more than Mr. Biden had raised in total since he entered the race in April 2019.

In addition, the coronavirus pandemic has put on hold indefinitely Mr. Biden’s ability to host in-person fund-raisers and is widely expected to sharply slow the pace of small online donations, as well.

In the Democratic race, Mr. Bloomberg, the former New York City mayor, had spent the most, a record-setting $907 million, including accrued bills. Mr. Bloomberg’s sum — in only 100 days — is more than what President Barack Obama spent on his entire 2012 re-election campaign.

All but Mr. Sanders have since dropped out.

Advisers to Mr. Sanders have said he is assessing the future of his campaign after lopsided losses last Tuesday in Florida, Arizona and Illinois. Mr. Sanders has since ceased advertising on Facebook and stopped directly asking supporters to give money to his campaign. He instead raised $2 million from his supporters for charities helping those affected by the coronavirus.

How Much Cash Candidates Had at the Beginning of Each Month

By Rachel Shorey and Denise Lu·Note: Mr. Biden entered the race in the second quarter of 2019. | Source: Federal Election Commission

There are a seemingly endless number of ways to measure Mr. Biden’s financial disadvantages in a Democratic primary he is now the prohibitive favorite to win.

Mr. Biden’s fund-raising was so bad in February that he fell behind Senator Amy Klobuchar of Minnesota that month, as well. She had raised $18.7 million before dropping out ahead of Super Tuesday; Mr. Biden had raised $18.1 million.

Mr. Biden had begun last month with a disappointing fourth-place finish in Iowa, dropped to fifth place in New Hampshire and nudged upward to second in Nevada. Big donors sat on the sidelines, drawn to the idea of the self-funding Mr. Bloomberg, at least until his own disastrous debate performance. Small contributors were filling the coffers of Mr. Biden’s rivals.

Mr. Biden had been on a trajectory for an even worse fund-raising showing in February until a surge following his South Carolina win. He said that he had raised $5 million in the 24 hours around that Feb. 29 election, lifting his fund-raising total substantially.

His advisers say that his financial fortunes have shifted since South Carolina. Mr. Biden said last Sunday that he had raised $33 million in the first 15 days of March — far more than he had raised in any full previous month.

“A lot of the people who always gave us money didn’t because they were doubters,” said Steve Cozen, a friend of Mr. Biden’s for decades and a fund-raiser for both his campaign and super PAC. “They were doubters until South Carolina and Super Tuesday. Now they’ve opened their pocketbooks, and we’re doing great.”

Still, the severity of the economic impact of the coronavirus could significantly affect campaigns going forward.

Mr. Biden received relatively little assistance from the super PAC Unite the Country during the crucial month of February. The group spent about $3.8 million and raised $4.2 million that month, with about half of that money coming on Feb. 28 in the form of two $1 million checks, one from Reid Hoffman, the Silicon Valley entrepreneur who is a co-founder of LinkedIn, and one from Yaron Minsky, a programmer at the stock-trading firm Jane Street.

The biggest super PAC donations in February went to Ms. Warren, who had been one of the party’s most outspoken critics of the influence of big money. Just ahead of the Nevada caucuses, a mysterious super PAC spent more than $15 million on her behalf.

The donors to that group were unmasked late Friday, and almost all the money — $14.6 million of it — came from a single donor: Karla Jurvetson, a Silicon Valley contributor who is a board member of Emily’s List, the group that supports Democratic women.