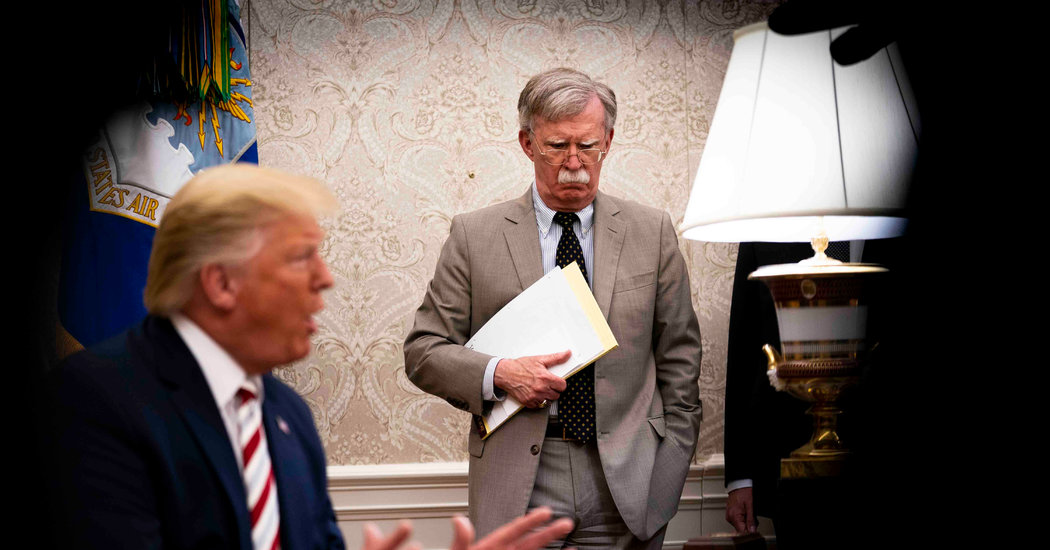 WASHINGTON — In another time, in another Washington, this might be the moment that changed the trajectory of the presidency. A former national security adviser confirms that the president, despite his denials, conditioned security aid to a war-torn ally on its cooperation against his domestic rivals, the issue at the heart of his ongoing impeachment trial.

At first glance, John R. Bolton’s account of President Trump’s private remarks sounded like an echo of the so-called smoking gun tape that proved President Richard M. Nixon really had orchestrated the Watergate cover-up and ultimately forced him from office. By the end of Monday, the revelation appeared to make it more likely that the Senate will agree to hear witnesses at the trial.

But this is Mr. Trump’s era and Mr. Trump’s Washington, and the old rules do not always apply anymore. The reality show star who was elected president even after he was captured on an “Access Hollywood” tape boasting about sexual assault has gone on to survive one politically charged furor after another during his three years in the White House, proving more durable than any national politician in modern American history.

So will this be a Watergate-style turning point or just one more disclosure that his critics consider validation without changing other minds? Will it be another smoking gun or another “Access Hollywood”?

The news of Mr. Bolton’s account in an unpublished book, first reported by The New York Times, could hardly have come at a worse time for Mr. Trump, just as his lawyers opened his defense on the Senate floor and days before the senators will vote on witnesses like Mr. Bolton.

Even as stunned and, in some cases, irritated Republican senators scrambled to figure out what to do, the president’s lawyers pointedly ignored Mr. Bolton’s book when they addressed the Senate on Monday, repeating their claim that Mr. Trump suspended $391 million in security aid to Ukraine to tackle corruption and force more European support for the former Soviet republic, not to leverage foreign help incriminating his Democratic rivals.

Directly contradicting Mr. Bolton’s account, Michael Purpura, a deputy White House counsel, asserted that “anyone who spoke with the president said that the president made clear that there was no linkage between security assistance and investigations.”

But privately members of the president’s legal team were preparing for the possibility that the Senate would vote to call witnesses as they tried to defuse anger among Republican senators who felt blindsided. The White House knew what Mr. Bolton had to say at least as far back as Dec. 30 when he sent the manuscript to the National Security Council for standard pre-publication review, and yet the president’s lawyers continued to promote a completely opposite version of events to the senators.

In his book, Mr. Bolton writes that Mr. Trump told him in August that he wanted to continue freezing congressionally approved security assistance to Ukraine until its government helped with investigations into Democrats including former Vice President Joseph R. Biden Jr. and his son Hunter Biden — exactly what Mr. Trump is on trial for.

Mr. Trump and his defenders sought to undercut Mr. Bolton by dismissing him as a disgruntled former employee seeking to take revenge and sell books. Mr. Bolton abruptly left the White House in September after months of tension with the president over his policies toward North Korea, Iran, Afghanistan and Ukraine; the president insisted that he fired him while Mr. Bolton insisted he resigned.

Starting early Monday morning and continuing into the day, Mr. Trump fired off messages on Twitter rebutting his former adviser’s account and attacking him as untrustworthy.

“I NEVER told John Bolton that the aid to Ukraine was tied to investigations into Democrats, including the Bidens,” the president wrote. “In fact, he never complained about this at the time of his very public termination. If John Bolton said this, it was only to sell a book.”

He also reposted messages from supporters assailing Mr. Bolton and comparing him to others the president viewed as disloyal like James B. Comey, the F.B.I. director he fired in 2017. “Just like James Comey, John Bolton is trying to get rich off a lie- and leak-fueled campaign to overturn the 2016 election results,” read one of the messages the president retweeted.

But Mr. Bolton is a hard witness for Mr. Trump to simply brush off. He is no liberal Democrat or deep-state bureaucrat, nor is he even a Never Trump Republican, but a conservative hawk with years of credibility among Republicans and a strong following from his days as ambassador to the United Nations and Fox News commentator. Unlike Mr. Trump, Mr. Bolton does not have a history of making thousands of false and misleading statements documented by fact checkers.

Mr. Bolton’s account on its face seems to eviscerate a central part of the defense that the White House began presenting on the Senate floor on Saturday. The president’s lawyers hammered House Democrats for relying on secondhand testimony and argued that no witness had come forward to say Mr. Trump had explicitly linked the aid to the investigations.

“Most of the Democrats’ witnesses have never spoken to the president at all, let alone about Ukraine security assistance,” Mr. Purpura told the Senate on Saturday. In their trial brief, the president’s lawyers wrote: “Not a single witness with actual knowledge ever testified that the president suggested any connection between announcing investigations and security assistance. Assumptions, presumptions and speculation based on hearsay are all that House Democrats can rely on to spin their tale of a quid pro quo.”

The House managers prosecuting Mr. Trump said that distorted the strength of their evidence, but either way, Mr. Bolton’s recollection is clearly a firsthand account, not a presumption — which at least some in the White House had reason to know at the time the brief was filed and the presentation was made on the Senate floor over the weekend.

Mr. Bolton has been one of the most intriguing figures in the Ukraine matter for weeks, ever since other former officials testified that he opposed the pressure campaign, calling it a “drug deal” he wanted no part of and warning that Rudolph W. Giuliani, the president’s personal attorney organizing the pressure, was a “hand grenade who’s going to blow everybody up.” Mr. Bolton told aides to report the pressure campaign to a White House lawyer.

Until now, Mr. Bolton has remained publicly silent and, in fact, despite the Times report about his book, has remained silent other than to deny leaking his book and blaming its disclosure on the White House.

House Democrats requested his testimony during their hearings last month, but they ultimately did not subpoena him, reasoning that a court fight would only prolong the investigative process for months.

Once the House impeached Mr. Trump and the case reached the Senate, Mr. Bolton announced that he would testify if subpoenaed. But Senate Republicans voted against subpoenaing him at the start of the trial, putting off a final decision until after arguments are complete, which could come later this week.

Another witness sought by the House managers, Mick Mulvaney, the acting White House chief of staff, has already publicly confirmed to reporters that Mr. Trump suspended the security aid in part to get Ukraine to investigate a conspiracy theory involving Democrats during the 2016 election campaign, although he later issued a statement retracting his comment.

His lawyer issued another statement on Monday denying that Mr. Mulvaney ever talked with Mr. Trump or anyone else about a link between aid and investigations, even though the acting chief of staff previously said the exact opposite on camera. “That’s why we held up the aid,” he said in October.

As damaging as Mr. Bolton’s account would seem to be, events of the last three years suggest it may not change the outcome. Several Republican senators on Monday dismissed it as nothing new.

Mr. Trump has endured so many scandals that would have brought down an ordinary politician. Just weeks before moving into the White House, he agreed to pay $25 million to settle fraud claims against Trump University. Since becoming president, he repaid hush money given to Stormy Daniels, the pornographic film actress, to keep quiet about an alleged affair. Another woman has sued him for rape and more than a dozen others have accused him of sexual misconduct.

His son, son-in-law and campaign chairman met with Russians offering “dirt” on his opponent that they said came from the Russian government. A special counsel investigation identified 10 instances when the president may have obstructed justice. His family foundation was forced to shut down after authorities found “a shocking pattern of illegality.” His businesses have benefited from foreign patrons with cause to curry favor with the president despite the Constitution’s emoluments clause.

Investigative reporting found that he engaged in dubious tax schemes during the 1990s, including instances of outright fraud. A wide swath of people around him have been convicted of various crimes, including his campaign chairman, his deputy, first national security adviser, longtime political adviser, longtime personal lawyer and others. And now Mr. Giuliani and a couple of his longtime associates are under federal investigation.

To Mr. Trump’s most fervent supporters, all of that is proof not that he is corrupt but that he has struck a nerve in Washington’s “swamp” and that the establishment is coming after him, manufacturing “hoaxes” to tear him down. That unwavering support within Republican Party voters, which he telegraphs on Twitter regularly, has hardly gone unnoticed by Republican senators as they sit in judgment of him.

But polls also show that two-thirds of the public wanted to hear from new witnesses in the trial now underway on Capitol Hill. Given the latest revelations, Mr. Bolton stands ready to testify with the fate of the president on the line.