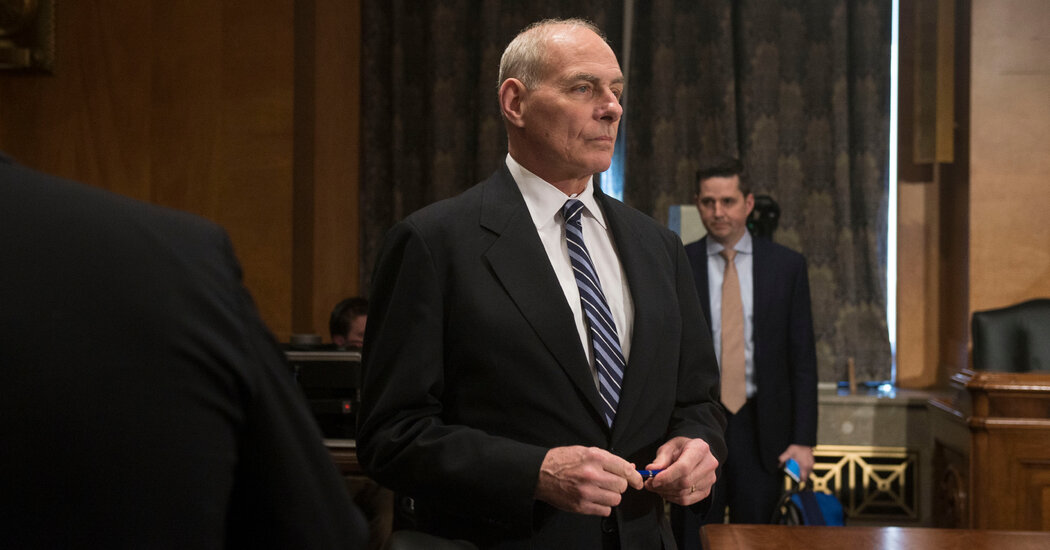 WASHINGTON — John F. Kelly left the White House barely on speaking terms with President Trump. In the months since, Mr. Kelly, a retired four-star general and former White House chief of staff, has stayed mostly silent as other senior military figures have publicly and harshly criticized the president.

Much to the consternation of friends and associates who have been pushing him to speak out, Mr. Kelly continued his silence on Friday about a report in The Atlantic that the president had privately referred to American troops killed in combat as “losers” and “suckers.”

Mr. Kelly refused on-the-record interview requests about his recollection of comments Mr. Trump had reportedly made when Mr. Kelly was with him on a 2018 trip to France. According to the report, the president said that he had decided against visiting a cemetery for American soldiers killed in World War I because “it’s filled with losers,” and that Marines slain in combat at Belleau Wood were “suckers” for getting killed.

The article also reported that during a 2017 visit to Arlington National Cemetery, Mr. Trump and Mr. Kelly stopped to pay respects at the grave of Mr. Kelly’s son, Second Lt. Robert Kelly, a Marine who was killed at age 29 in Afghanistan in 2010.

“I don’t get it. What was in it for them?” the magazine reported that Mr. Trump had said to Mr. Kelly about his son’s service and sacrifice.

Mr. Kelly’s decision to stay publicly silent since he left the West Wing at the end of 2018 has frustrated groups like Republican Voters Against Trump, which has been actively pursuing him in hopes of encouraging him to publicly endorse former Vice President Joseph R. Biden Jr., the Democratic presidential nominee.

William Kristol, a prominent Never Trump conservative helping to run the Republican group against Mr. Trump, said the pitch to Mr. Kelly was that he should not “say a word about private conversations with the president, just give us your judgment.”

But Mr. Kelly, who served for more than 40 years in the Marines, has told associates that a retired four-star general should not come out against a sitting president in the heat of a political campaign, even though former Defense Secretary Jim Mattis, another retired four-star Marine general, publicly criticized Mr. Trump in June for lacking “mature leadership” and trying to divide rather than unite the country.

“He wants to avoid taking a position that might be perceived as political,” said Gen. Anthony C. Zinni, a retired four-star Marine Corps general and a close friend of Mr. Kelly, who had not spoken to him since the publication of the Atlantic article. “I also think he takes to heart the commitment to confidentiality in matters related to their interaction with the president.”

Mr. Kelly’s silence did not save him from the president’s wrath.

“This man was totally exhausted,” Mr. Trump said of Mr. Kelly at a news conference on Friday. “He wasn’t even able to function in the last number of months.”

In the wake of The Atlantic’s report, the pressure on Mr. Kelly has been building.

“There is nothing noble about choosing loyalty to a former boss over fidelity to his oath to support and defend a Constitution that is under siege by that same boss,” said Philippe Reines, a former top adviser to Hillary Clinton.

Mr. Reines was working for Mrs. Clinton when she was secretary of state and praised Mr. Kelly, then the senior military aide to Defense Secretary Leon E. Panetta, for swiftly finding a plane to transport the bodies of the four Americans who died in the attacks in Benghazi, Libya, from a ceremony at Joint Base Andrews to Dover Air Force Base.

Mr. Kelly was also on the advisory board of Mr. Reines’s former consulting company, Beacon Global Strategies. “If his and others’ silence is based on assuming Trump will lose without their having to speak out, well, we’ve seen that movie before,” Mr. Reines said. “If Trump is re-elected, their current silence will have played a big part.”

Friends and associates of Mr. Kelly said that his calculation about whether to speak out was also intertwined with publicly revisiting his son’s death.

“He was very private about the loss of his son, and we as his staff fully respected that,” said Elizabeth Neumann, who was deputy chief of staff to Mr. Kelly when he was secretary of the Department of Homeland Security. “This is not the type of thing he wants politicized and doesn’t feel like it’s the right thing to speak about.”

Mr. Kelly, who served three tours in Iraq during some of the worst violence there, later became chief military aide, a highly influential position, to Defense Secretary Robert M. Gates; he continued in the position under Mr. Panetta. Mr. Kelly went on to become the commander of United States Southern Command, which oversees all American military operations in Central and South America.

Mr. Kelly, who is the most senior U.S. military officer to lose a son or daughter in the wars in Iraq and Afghanistan, took a hard line on immigration at the Department of Homeland Security, which pleased Mr. Trump.

Mr. Kelly moved on to the White House as Mr. Trump’s second chief of staff, a tenure that was characterized by bouts of private anger that he kept masked behind public defenses of the president.

In October, Mr. Kelly said at a conference that he felt “bad that I left,” implying that if he had stayed at the White House, he could have fended off the president’s impeachment late last year. White House officials have made it clear they have no regrets about the breakup.

“I worked with John Kelly, and he was totally unequipped to handle the genius of our great president,” Stephanie Grisham, the former White House press secretary, said of Mr. Kelly at the time.

In an interview in June, Mr. Kelly said that he “agreed” with Mr. Mattis’s warning about the president. But he left the onus for the condemnation on Mr. Mattis. “For him to do that,” Mr. Kelly said, “tells you where he is relative to the concern he has for our country.”