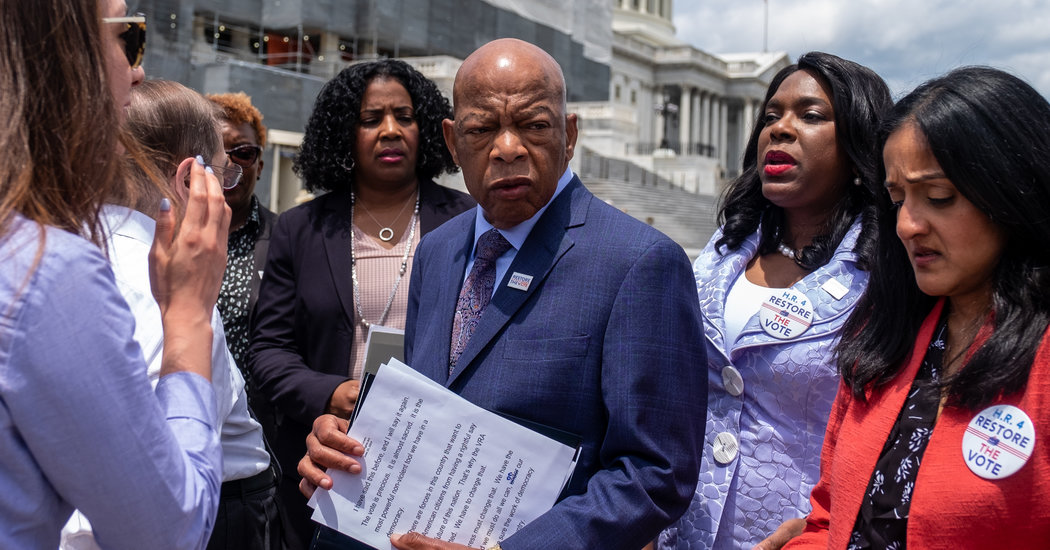 Representative John Lewis, an iconic civil rights leader and one of the nation’s most prominent black lawmakers, on Tuesday endorsed Joseph R. Biden Jr. in the 2020 presidential contest, in the latest illustration of Mr. Biden’s strength with many African-American voters.

Mr. Lewis, Democrat of Georgia, called the former vice president “a friend, a man of courage, a man of conscience” and promised to “travel around America to support him.” He also expressed enthusiasm at the prospect of a woman of color on the Democratic ticket.

The congressman, a veteran of some of the most significant moments in the history of the civil rights movement, including the Bloody Sunday march in Alabama and the 1963 March on Washington, announced in December that he had advanced pancreatic cancer. But in a call with reporters on Monday evening, he said that he wanted to campaign aggressively for Mr. Biden — though the coronavirus outbreak has shuttered the traditional campaign trail for now.

Since then, Mr. Biden has sometimes struggled to break through, overshadowed by President Trump and the bully pulpit of the presidency, as well as by governors on the front lines of the crisis.

“I know what it is to campaign hard and to work hard,” Mr. Lewis said, acknowledging that he faced some “problems now, but they will not be with me forever.” “And I will be out there working and campaigning for Joe Biden as president of the United States of America.”

Mr. Biden has not yet clinched the Democratic nomination; Senator Bernie Sanders of Vermont continues to campaign too. But with Mr. Biden holding an almost insurmountable lead in delegates, his campaign has started the process of looking for a running mate. He has said he will pick a woman.

Older black voters, in particular, revived Mr. Biden’s once-floundering candidacy and played a decisive role in propelling him to the cusp of the Democratic nomination. Some Democrats — including Representative James E. Clyburn of South Carolina, the highest-ranking African-American in Congress and a top Biden ally — have expressed a preference for a black woman on the ticket with Mr. Biden.

Mr. Lewis noted that there are “plenty of able women. Black, white, Latino, Asian-American, Native American.” The time has “long passed,” he said, for making “the White House look like the whole of America. ”

Should Mr. Biden win the Democratic nomination, one of his biggest challenges will be energizing younger, more progressive voters, many of whom remain skeptical of him. Asked how Mr. Biden should engage younger black voters who are less enthusiastic about turning out for Mr. Biden, Mr. Lewis, who is 80, said simply that they faced a choice in elections, and, noting the sacrifices others had made for the right to vote, urged them to turn out.

But he also expressed concern about voting against the backdrop of a pandemic, in a nation that has struggled with voter suppression, saying that he worried about whether the country would have a “free” election.

“I just hope that, in spite of whatever is going on now, that people will not be afraid to come out and vote,” he said. “We have to vote.”