Iowa was not on anyone’s bingo card of 2020 battlegrounds.

Donald J. Trump carried the state by nine percentage points in 2016, and a year ago prominent Democrats in the state passed up the chance to challenge Senator Joni Ernst, a popular Republican seeking re-election.

But with the political ground shifting precariously under Mr. Trump amid multiple crises, Iowa is unexpectedly in play in the presidential and Senate races this year, moving Republicans to high alert. Democrats, who a few years ago were shrouded in despair that their party might never again appeal to white working-class voters, are energized.

A poll published by The Des Moines Register and Mediacom on Monday showed Mr. Trump with only a one-point lead in the state over former Vice President Joseph R. Biden Jr. The poll revealed a deep erosion of support for the president among white women without college degrees, voters who were key to his 2016 coalition across a swath of Midwestern swing states.

The same survey showed that Ms. Ernst, a rising star in her party in her first term, was narrowly trailing her little-known Democratic challenger.

Theresa Greenfield, the Democratic Senate nominee who emerged from a primary on June 2, is running primarily on a biography with parallels to the one Ms. Ernst used to introduce herself to Iowans six years ago: Both grew up on farms, and both have made promises to show Washington their scrappy values of hard work and self-reliance.

But Ms. Greenfield is turning Ms. Ernst’s celebrated anti-establishment catchphrase against her rival.

“Senator Ernst told Iowans in 2014 she was going to be independent and different and she was going to ‘make ’em squeal,’” Ms. Greenfield said in an interview, echoing a television ad six years ago in which Ms. Ernst said she would take a knife to federal spending the way she castrated hogs on the farm. “The bottom line is nobody’s squealing except Iowans.”

Ms. Ernst declined an interview request. But her advisers noted that Ms. Greenfield, a businesswoman and political newcomer, was riding the crest of more than $7 million in positive TV ads by liberal outside groups.

“This is Greenfield’s high-water mark,” said David Kochel, a senior adviser to the Ernst campaign. He promised that the Democrat would soon face a barrage of negativity. “Forty percent of Iowans don’t have an opinion of Theresa Greenfield,” he said. “We’re here to help.” 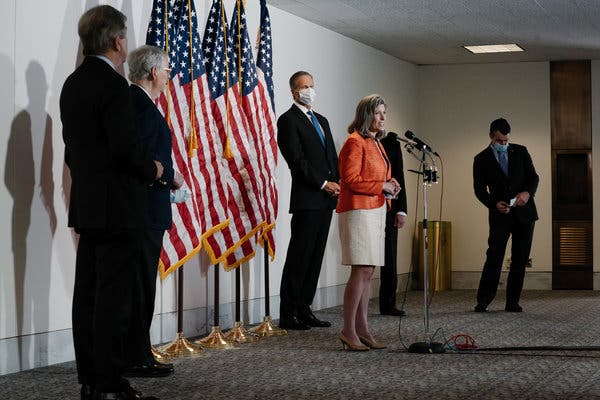 In the Des Moines Register poll, Mr. Trump led Mr. Biden 44 percent to 43 percent among likely voters, the latest in a wave of national and state polls showing the president’s prospects for re-election at their most precarious all year.

Although the road to the White House in November will not hinge on Iowa, with its meager six electoral votes, the tightness of the race in the state is an ominous sign for Mr. Trump in other Midwestern battlegrounds like Ohio and Wisconsin, which also have large electorates of older and rural voters, and white voters without college degrees.

Amid a pandemic that the president seeks to minimize, and widespread anti-police protests after the killing of George Floyd in Minneapolis, Mr. Trump’s approval has slipped five points in Iowa since March, to 45 percent. Only 37 percent approve of the way he has handled the protests. The president retains strong support from evangelical voters and white men. But white working-class women preferred Mr. Biden over Mr. Trump in the Register poll, 53 percent to 35 percent.

The 18-point gap strikingly reversed the president’s advantage from 2016, when he carried white women without college diplomas by two points in Iowa. He won the state after it twice voted for President Barack Obama.

“Right now I’d like to kick them all out,” said Mary Figenshaw, a political independent in Jefferson, Iowa. A retired bank teller, she is “not crazy about” a second term for Ms. Ernst, she said. “I don’t think she’s done a lot. She’s standing by Mitch McConnell in all the photos. I just don’t think any of our congressmen are doing what they should be doing for the common people.”

Rob Sand, Iowa’s state auditor and one of its top elected Democrats, said that Iowans swung to Mr. Trump because he promised to stand up for people who felt marginalized in the economy and ignored by political elites. But the twin crises of the coronavirus and racial injustice have exposed the president as incapable of empathy or leadership, Mr. Sand said, adding, “He can’t handle a crisis.”

Recognizing the threat in Iowa, the president’s re-election campaign spent more than $400,000 on TV ads in the state in May and June, according to Advertising Analytics, a tracking firm.

Democrats’ top presidential super PAC, Priorities USA, rated Iowa this month as leaning toward Mr. Trump and outside the top-six battleground states: Pennsylvania, Michigan, Wisconsin, Arizona, North Carolina and Florida. But that might change. “While Iowa isn’t currently in our spending plans, it’s a state we’re keeping an eye on,” said Josh Schwerin, a senior strategist for the group. “The fact that it’s in play shows that Biden is on offense and will have multiple paths to 270,” he added, referring to the electoral votes needed for victory.

It’s a different story in the Senate race. Democratic outside groups have booked $24.1 million to support Ms. Greenfield with TV ads through Election Day, and Republican groups are close behind with $22.6 million on behalf of Ms. Ernst.

Democrats hoping to control the Senate need to net four seats in November (or three if they win the White House since the vice president has a tiebreaking vote). Their top targets are Republican incumbents in Colorado, Arizona and Maine. Close behind are the incumbents in North Carolina and, increasingly, Iowa.

The Senate Majority PAC, the top outside Democratic group in Senate races, has lined up $13 million for TV ads in Iowa after Labor Day. It matches $12.5 million reserved by the leading Republican outside group, the Senate Leadership Fund.

“The idea that Iowa’s in play really shouldn’t surprise people,” said J.B. Poersch, president of the Senate Majority PAC, which is aligned with Senator Chuck Schumer of New York, the Democratic leader. “It came to the table this way, since the intensity of the caucuses.”

The Iowa caucuses in February may have been a fiasco when it came to counting votes, as well as an embarrassment for Mr. Biden, who finished fourth. But a year of intense organizing by presidential hopefuls in the state brought a bounty of new Democratic voters. Democrats now outnumber registered Republicans in the state by 9,000, a reversal from the 2018 midterm elections when Republicans had a 23,000-voter advantage.

Ms. Greenfield, who until recently was president of a commercial real estate company, led Ms. Ernst by three points in the Register poll, 46 percent to 43 percent. It is the first time Ms. Ernst, a former state senator and National Guard commander in Iraq, has trailed in a general election survey by the pollster J. Ann Selzer, the most respected in Iowa, since 2014. (Ms. Greenfield’s lead, however, was within the poll’s margin of sampling error.)

Paralleling the gender gap in the presidential race, Ms. Greenfield held a 20-point lead among women. Just as Ms. Ernst, 49, told of her thrifty farm upbringing when she first ran, Ms. Greenfield, 56, describes how her parents, who ran a crop-dusting business and raised hogs just across the Minnesota border, were driven out of farming in the 1980s farm crisis.

“They never farmed again and us five kids left the rural area,” she said.

Ms. Greenfield’s first husband, a union electrician, died in a workplace accident; as a candidate she praises the Social Security survivors’ benefits that sustained her, a narrative with obvious appeal in Iowa’s blue-collar communities along the Mississippi River, the swingiest part of the state.

“It was Social Security, it was union benefits that kept me from going into poverty and gave me the opportunity to pay the rent and put milk in the fridge and go back to school and start rebuilding a path to providing for my family,” Ms. Greenfield said.

At the same time, she accused Ms. Ernst of implying she would cut Social Security “behind closed doors” — an attack that seemed to twist a comment of Ms. Ernst’s last year.

As promised, the Ernst campaign has gone on the attack since Ms. Greenfield emerged from her four-way primary. “Liberal outside groups spent $10 million to prop up Chuck Schumer’s candidate, Theresa Greenfield, in the primary,” said Brendan Conley, a spokesman for Ms. Ernst. “But now Iowans are learning about Greenfield’s record as a failed real estate executive, like kicking out small businesses to make way for a multinational corporation.”

The reference is to a strip-mall redevelopment that Ms. Greenfield oversaw in 2015. Small retailers were displaced. Ms. Greenfield said the merchants had reached the end of their leases, and today a new shopping center on the site is home to other retailers. The “multinational corporation” was an Aldi grocery store that never moved in. “Senator Ernst, she’s desperate,” Ms. Greenfield said.

Despite being a political novice, Ms. Greenfield has absorbed message discipline. She skirted attacking Mr. Trump in the interview. Asked if her race would be swept up in a broad referendum on the president, she replied: “Gosh, I have no idea. I’ll let Iowans decide what they think about President Trump. I’m running against Senator Ernst and that’s what I stay focused on.”