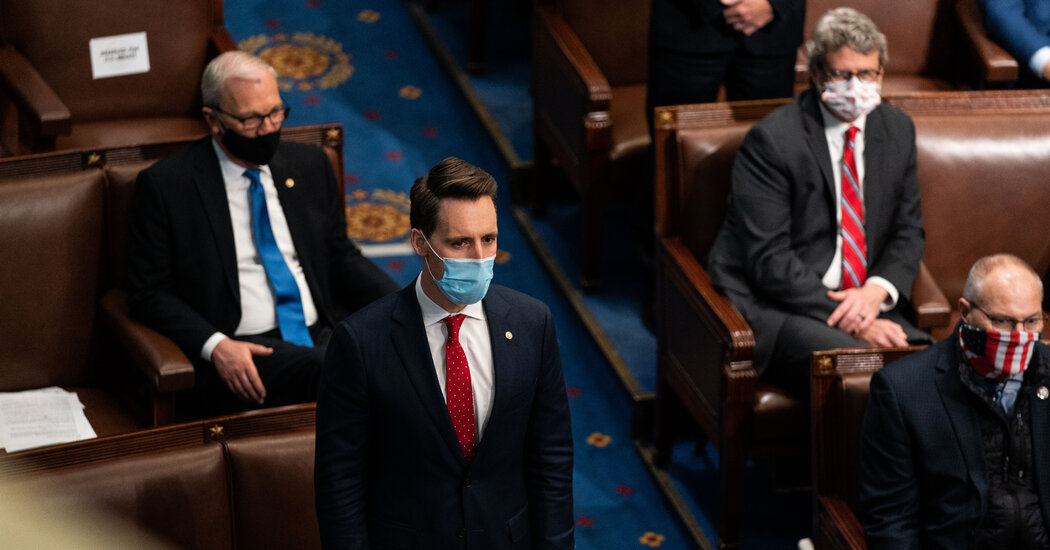 Former staff members for Claire McCaskill, a Democrat who lost re-election in 2018 to Senator Josh Hawley, have started a super PAC to defeat Mr. Hawley the next time he runs for office — part of a broad backlash against him for leading the effort last week to overturn the results of the presidential election.

“Senators swear an oath to the Constitution and loyalty to this country, not aid and abet an attempted coup against both,” the super PAC’s first ad, posted on Friday, says. The group is called Just Oust Seditious Hacks, a backronym for JOSH.

Mr. Hawley, who represents Missouri and is viewed as someone who wants to run for the Republican presidential nomination in 2024, was the first senator to agree to join House members in challenging the election results when Congress convened to formalize them on Jan. 6.

Because such challenges require the backing of at least one senator to receive consideration from members of Congress, his action guaranteed the disruption of what is normally a ceremonial process — a disruption during which supporters of President Trump violently stormed the Capitol. His decision drew immediate backlash from fellow Republicans, and the anger intensified after the Capitol attack, with some lawmakers calling for Mr. Hawley’s resignation and Simon & Schuster canceling plans to publish his book.

Senator Ted Cruz of Texas, who joined Mr. Hawley in objecting to the results, has also faced a backlash, including the resignation of his communications director this week. But while Mr. Cruz lodged his objection to the results in Arizona at the beginning of the proceedings, Mr. Hawley has drawn particular ire for objecting to the Pennsylvania results hours later, after the attack on the Capitol had taken place.

“Josh Hawley is convinced that his efforts to overturn the 2020 election and deny Joe Biden the presidency — even after helping fuel the U.S. Capitol riots — will make him president in 2024,” the new super PAC said in a statement. “He’s betting that the same far-right, nationalist mobs that supported Donald Trump will put him in the White House to continue Trump’s work. JOSH PAC will run a permanent campaign to stop him now.”

A spokeswoman for Mr. Hawley responded: “We expect Claire McCaskill and her team will be as effective with this campaign as they were with the last. They wasted more than $60 million in 2018 — and lost — after Missourians rejected Claire McCaskill’s failed liberal policies.”

The super PAC, news of which was first reported by Politico, is part of a long tradition of efforts to fund election challenges in response to a specific vote or action by a lawmaker. These efforts are not always successful, even when they involve large amounts of money.

For instance, a crowd-funded campaign in 2018 raised $3.7 million for whichever Democrat would be nominated to challenge Senator Susan Collins, Republican of Maine, in response to her support for confirming Judge Brett M. Kavanaugh to the Supreme Court. The candidate ended up being Sara Gideon, who gave Ms. Collins her most serious challenge in years but who ultimately lost by more than eight percentage points.