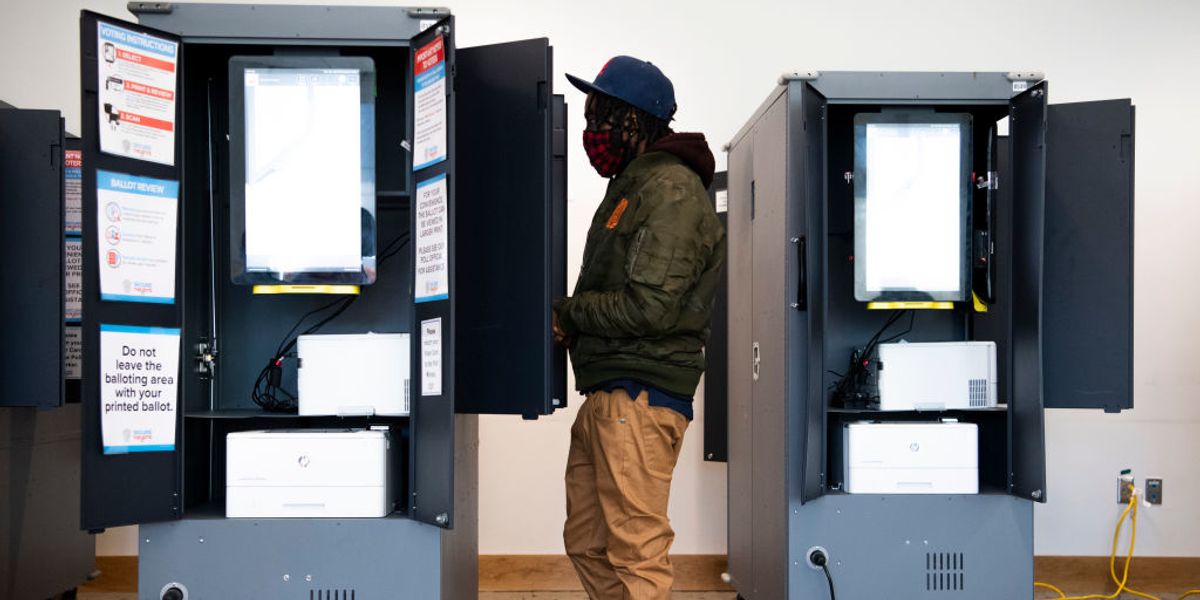 U.S. District Judge Timothy Batten Sr.’s order — which applies to voting machines in Cobb, Gwinnett, and Cherokee counties — came about after pro-Trump attorney Sidney Powell filed a lawsuit in the state alleging the machines were manipulated to procure an election victory for Democratic nominee Joe Biden.

Plaintiffs in the case, including conservative teen pundit C.J. Pearson, are seeking an order to allow them to forensically inspect the machines for evidence of fraud.

“Defendants are hereby enjoined and restrained from altering, destroying, or erasing, or allowing the alteration, destruction, or erasure of, any software or data on any Dominion voting machine in Cobb, Gwinnett, and Cherokee Counties,” the order stated. “This temporary restraining order shall remain in effect for ten days, or until further order of the Court, whichever comes first.”

Batten also ordered the group of defendants, which includes Georgia Gov. Brian Kemp (R) and Secretary of State Brad Raffensperger (R), to “file a brief setting forth in detail the factual bases they have, if any, against allowing” forensic inspections of the machines in the three counties. They have until Wednesday to do so.

According to the order, in a hearing on Sunday, state officials demonstrated opposition to a forensic inspection of the machines and argued they don’t have the authority to instruct county officials on the matter.

In their emergency motion filed on Friday, plaintiffs argued that the vote count certified by Georgia officials last week, which declared Biden the winner of the state’s 16 electoral votes over President Donald Trump, is “wrong.”

“Tens of thousands of votes counted toward Vice President Biden’s final tally were the product of illegality, and physical and computer-based fraud leading to ‘outright ballot stuffing,'” they stated.

“Georgia’s election process depends entirely on voting machines, tabulators and software purchased from Dominion Voting Systems Corporation that was compromised. Computerized vote recording and tabulations are controlled by software programs that were designed to cheat, and which were open to human manipulation,” the motion continued.

Batten noted in his order that the defendants argued “allowing such forensic inspections would pose substantial security and proprietary/trade secret risks.”

On the same day that Batten issued the order, a machine recount in Georgia requested by the Trump campaign was forced to stop when a server maintained by Dominion crashed in Fulton County.

Election officials said the crash was due to an unspecified problem but maintained that Dominion technicians had been dispatched to resolve the issue.

The current tally in the state shows Trump trailing Biden but just under 13,000 votes, or a margin of 0.2%.