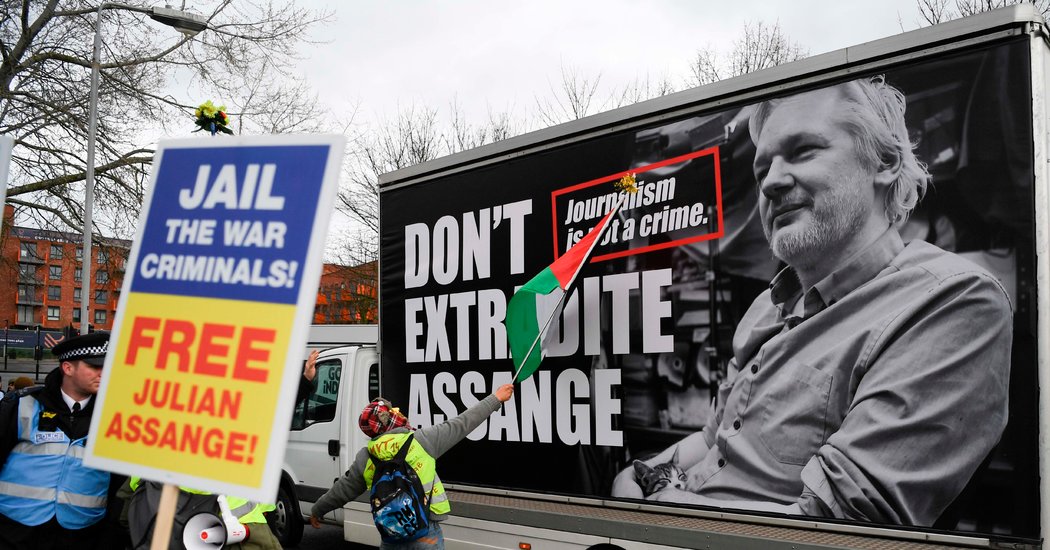 LONDON — Julian Assange, the WikiLeaks founder who spent seven years holed up in the Ecuadorean embassy in London before being evicted and arrested last year, was back in court on Monday fighting extradition to the United States.

Mr. Assange is wanted by the American authorities on charges of conspiring to hack into a Pentagon computer network, and he could face as many as 175 years in prison if found guilty on all charges.

His appearance in Woolwich Crown Court was the latest twist in a saga that stretches back to 2010, when he began publishing secret American military and diplomatic documents that were provided by the former Army intelligence analyst Chelsea Manning, who was convicted at a court-martial in 2013 of leaking the documents.

That in part explains why Mr. Assange was not prosecuted under the Espionage Act for publishing U.S. government secrets. Instead, prosecutors have charged him with conspiring to commit unlawful computer intrusion for what they say were his efforts to help Ms. Manning break into a classified military network under another user’s identity.

After he was arrested in London in 2012 on allegations of rape in Sweden, Mr. Assange, 48, sought refuge in the Ecuadorean embassy. He lived there with his cat in a small corner room, becoming perhaps the world’s most famous self-proclaimed political refugee.

He continued to run his internet group, hold news conferences and wave to admirers from an embassy balcony. But with the departure in 2017 of Ecuador’s leftist president, Rafael Correa, who had granted him asylum, Mr. Assange’s days in the embassy were numbered.

By the time the Metropolitan Police in London dragged him from the embassy in April, he looked haggard and disheveled.

For the last year, he has been held at Belmarsh Prison, which is next to the courtroom where his extradition case will be heard over the next month.

Mr. Assange’s lawyers, in pretrial motions, suggested that they would cast the prosecution as politically motivated and argue that their client was simply acting as a journalist and publisher.

Mark Summers, one of Mr. Assange’s lawyers, has said that prosecuting his client could have a chilling effect on press freedom.

“This is part of an avowed war on whistle-blowers to include investigative journalists and publishers,” Mr. Summers told the court last year.

Mr. Assange’s legal team has also sought to tie their client to President Trump, telling the court that former Representative Dana Rohrabacher of California, an ally of the president, had offered a pardon to Mr. Assange on Mr. Trump’s behalf if the WikiLeaks founder were to say that Russia had had nothing to do with the 2016 hacking of the Democratic National Committee.

The White House press secretary, Stephanie Grisham, has called the suggestion of a pardon offer “a complete fabrication and a total lie.”