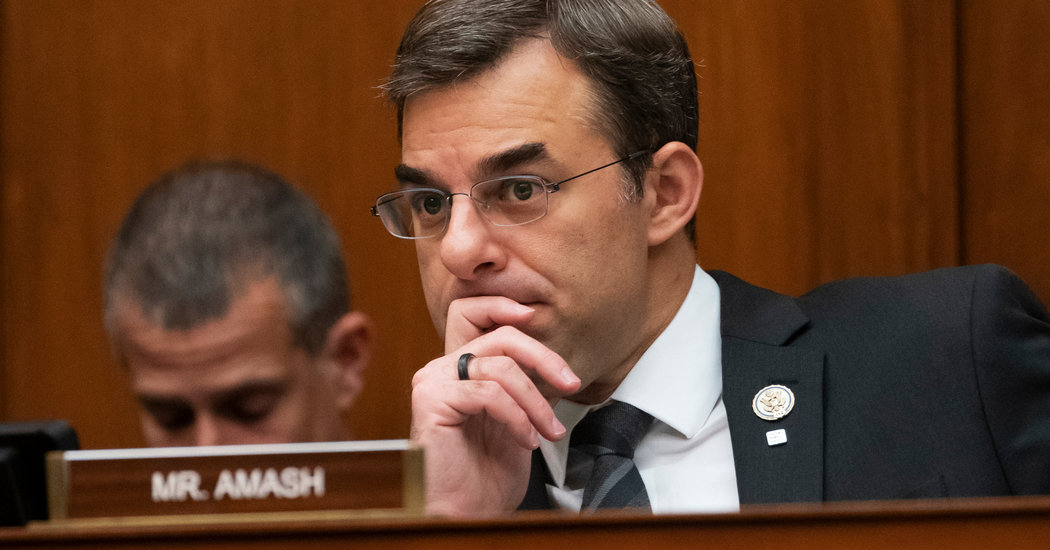 Representative Justin Amash of Michigan announced on Saturday that he would not pursue the Libertarian Party’s nomination for president, bringing an end to his extended flirtation with a third-party candidacy that could have introduced a new element of uncertainty into the race between President Trump and former Vice President Joseph R. Biden Jr.

Mr. Amash, a former Republican who left the party last year after clashing with Mr. Trump and later voted to impeach him, explained on Twitter that he believed there were probably insurmountable hurdles to running a successful candidacy this year from outside the two major political parties.

Among those challenges, he said, is the difficulty of campaigning and qualifying for the ballot in all 50 states during a pandemic that has brought much of the country’s public life to a halt. He added that it would be difficult to raise money in the middle of a severe economic downturn.

“I continue to believe that a candidate from outside the old parties, offering a vision of government grounded in liberty and equality, can break through in the right environment,” Mr. Amash said. “But this environment presents extraordinary challenges.”

Mr. Amash, a 40-year-old conservative of Syrian-American descent, stirred anxiety across the political spectrum last month when he declared that he was formally joining the Libertarian Party to consider a campaign for its 2020 presidential nomination. Republicans feared that he could peel away votes from Mr. Trump on the right, while Democrats worried that he would attract disillusioned Republican voters who might otherwise embrace Mr. Biden as the only available alternative to Mr. Trump.

It has been decades since a candidate who is neither a Republican nor a Democrat has become a major competitor for the presidency, but minor candidates have repeatedly peeled away support from the two traditional parties in disruptive ways. Mr. Amash could well have played that kind of role, especially in his home state Michigan, a state Mr. Trump carried in 2016 but where he is currently trailing Mr. Biden in the polls.

A poll taken this month by Monmouth University suggested Mr. Amash could have started a presidential candidacy that made a small but not insignificant imprint on the campaign. In a two-way race between Mr. Trump and Mr. Biden, the poll showed Mr. Biden ahead by 9 percentage points. With Mr. Amash included, Mr. Biden led by a slightly smaller margin of 7 percentage points.

In the poll, about four in five voters said they had no opinion of Mr. Amash.

On Saturday, Mr. Amash acknowledged that “polarization is near an all-time high,” leaving even less room than usual for options outside the traditional party system.

Mr. Amash said he would remain supportive of the Libertarian Party, though his exit from the presidential contest left the group without any White House contenders of even modest political stature. The small-government group welcomed Mr. Amash with open arms in April, when he became the only member of Congress to have ever been a member of the party.

In the past few elections, the Libertarians have nominated former Republican officeholders for the presidency. In 2016, a ticket composed of two former Republican governors, Gary Johnson of New Mexico and Bill Weld of Massachusetts, collected about four and a half million votes — a bit more than 3 percent of the popular vote.