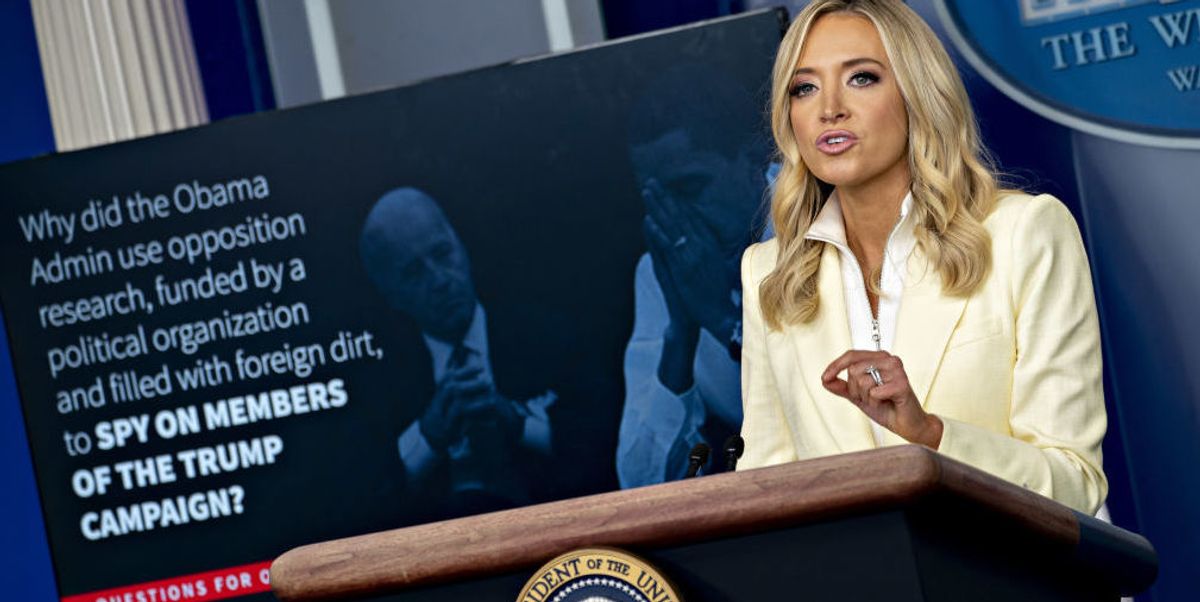 White House press secretary Kayleigh McEnany whipped out a slideshow for the press corps on Friday that contained numerous questions regarding “Obamagate” that journalists have failed to ask.

During last Friday’s press briefing, McEnany explained the misconduct allegedly committed by the Obama administration, including the criminal leak of Michael Flynn’s name to the media after it was unmasked in captured surveillance data. At the end of the briefing, McEnany urged reporters to begin asking questions about the Obama administration’s involvement in the Trump-Russia investigation.

But the mainstream media has failed to ask those questions. So, on Friday, McEnany laid out the specific questions she said reporters should start asking.

“I laid out a series of questions that any good journalist would want to answer about why people were unmasked and all sorts of questions, and I just wanted to follow up with you guys on that,” McEnany began “Did anyone take it upon themselves to pose any questions about Michael Flynn and unmasking to President Obama’s spokesperson?

“Oh, not a single journalist has posed that question?” McEnany continued. “OK, so I would like lay out a series of questions and perhaps if I write them out in a slide format, maybe we’re visual learners, and you guys will follow up with journalistic curiosity.”

The specific questions that McEnany laid out were:

McEnany also pointed out what she believes is hypocrisy. She said that if the Trump administration would have done what the Obama administration allegedly did, then the press corps would be hammering her with questions.

“I mean, this is extraordinary and, you know, if it were political appointees in the Trump administration, I can guarantee you, I’d have questions in my inbox right now, but apparently Obama’s spokesperson does not,” McEnany said. “Where are the questions to Obama’s spokesperson? Because my team would be running around this building should this have happened under the Trump administration.”

McEnany concluded the briefing by once again urging reporters to seek answers to the questions she presented.

“It’s a long weekend, you guys have three days to follow up on those questions, and I certainly hope the next time I ask some hands go up because Obama’s spokesperson should be asked those questions because President Trump’s spokespeople certainly would be,” McEnany said.