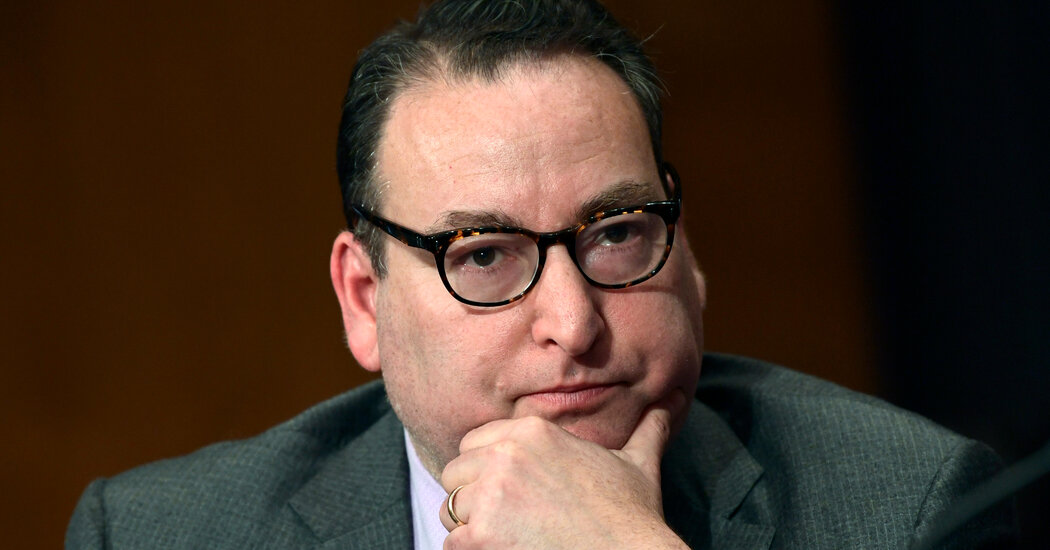 WASHINGTON — The Education Department’s civil rights chief has for 40 years labored to enforce civil rights protections in the nation’s schools and universities, but few have attracted as much attention as Kenneth L. Marcus, who will leave the post this week after two years marked by dissension, disputes — and significant accomplishments.

Mr. Marcus, who came to the job as a fierce champion for Israel and a critic of anti-Zionist movements on college campuses, is credited with overseeing the completion of sexual misconduct rules and expanding civil rights for Jewish students amid rising anti-Semitism. In announcing his departure, he said he had restored the office’s status “as a neutral, impartial civil rights law enforcement agency that faithfully executes the laws as written and in full, no more and no less.”

But in recent months, two separate complaints that have been filed accuse Mr. Marcus of abusing his authority by forcing through cases that furthered his personal and political agenda. In January, a former lawyer in the Office for Civil Rights said Mr. Marcus forced employees to investigate a policy that allowed transgender athletes in Connecticut to compete on female sports teams, even though the lawyers questioned the merits of the case.

In another complaint filed in May with the department’s inspector general, nine civil rights groups said Mr. Marcus gave preferential treatment to a conservative Zionist group with close personal ties to him when he reopened a settled anti-Semitism case against Rutgers University.

More broadly, Mr. Marcus was accused of using the office to fulfill a longstanding goal of recognizing Jewish students as a protected class under civil rights laws, while undermining policies that shielded other minority populations from discrimination. He publicly boasted that one of his first acts in office was rescinding Obama-era guidelines on how schools could use affirmative action to increase diversity in their programs.

And last fall, he moved to eliminate critical categories of civil rights data that the federal government collects from schools, like preschool enrollment by race, while proposing to broaden categories that he has long held interest in, like religious harassment.

“What we saw with Ken Marcus was a misuse of the office to further marginalize marginalized people,” said Liz King, the program director for education at the Leadership Conference on Civil and Human Rights, which joined dozens of groups in opposing Mr. Marcus’s confirmation.

“It is clear that he was never neutral,” Ms. King added. “Ken Marcus’s civil rights agenda was always his own, and students paid dearly for his time in office.”

Mr. Marcus, who was confirmed to lead the office in June 2018, is perhaps best known for resurrecting a complaint against Rutgers University, in which he unilaterally adopted a disputed definition of anti-Semitism that includes opposition to the state of Israel and asserted the department’s right to treat Judaism as a national origin. His decision to reopen the complaint, which had been dismissed by the Obama administration, caused an uproar among Palestinian rights and higher education groups, which had long fought Mr. Marcus’s efforts to squelch student calls for boycotting, divesting from and imposing sanctions on Israel.

The Rutgers case emboldened Mr. Marcus to push similar investigations into national origin at other high-profile universities, including whether Jewish students were discriminated against in admissions processes. His efforts were widely seen as the groundwork for an executive order to combat anti-Semitism on college campuses.

Susan B. Tuchman, the director of the Center for Law and Justice at the Zionist Organization of America, which filed the Rutgers complaint, said Mr. Marcus raised awareness that colleges were not effectively responding to harassment of Jewish students.

“Mr. Marcus let publicly funded schools know that they could no longer justify Israel-bashing that was a mask for Jew hatred,” Ms. Tuchman said.

The complaint to the inspector general requested an investigation into whether Mr. Marcus had broken the office’s protocol by personally overseeing the Rutgers complaint, saying he had violated his “obligation of impartiality.” In 2012, Mr. Marcus wrote an “open letter” to the president of Rutgers criticizing the university’s response to claims of anti-Semitism. The complaint included data that showed that as civil rights chief, Mr. Marcus bypassed more than 400 older appeals to embrace the Zionist Organization of America’s.

Zoha Khalili, a staff lawyer of Palestine Legal, one of the groups that filed the complaint, said the matter should still be investigated, though Mr. Marcus is leaving. The groups said his decision led to a “a growing influx” of “investigations targeting advocacy and scholarship on Palestinian rights.”

“We have a long road ahead to undo the damage that he and the rest of the administration have done,” she said.

Andrew Getraer, the executive director of Rutgers Hillel, said not much came of the investigation.

“Symbolically, it was worthwhile to finally have the department acknowledge what had been done,” he said. “But it was an announcement, and then it faded away.”

Mr. Marcus was applauded by some civil liberties groups for the completion of rules for how schools and colleges should respond to sexual misconduct under Title IX, the federal law that prohibits sex discrimination. Those rules bolstered the rights of accused students and narrowed liability for schools.

“Ken Marcus has been one of the only bright spots for me in this administration, as a conservative,” said Linda Chavez, who oversees the Center for Equal Opportunity, a conservative research group.

The lawyer, Dwayne Bensing, filed a whistle-blower complaint with the Office of Special Counsel outlining how Mr. Marcus pressured his employees to rush a complaint filed last June by the Alliance Defending Freedom, a conservative Christian conservative group. The group claimed that Connecticut policy allowing transgender athletes to compete on female sports teams amounted to sex discrimination against women.

Last August, when the alliance announced that the Education Department had opened the complaint, Mr. Bensing said he investigated how such a complex case had been established so quickly.

Mr. Bensing said lawyers questioned whether the department had jurisdiction because Title IX protected students from being treated differently on the basis of their sex, while transgender athletes and other girls were being treated the same. He said when he saw an email trail with Mr. Marcus’s name in it, he was alarmed.

“The entire case processing manual went out the window, and Ken Marcus’s fingerprints were all over it,” Mr. Bensing said in an interview.

That August, two days before the department notified the Alliance Defending Freedom that its complaint would be investigated, a civil rights enforcement director told staff members they “must have a draft for Ken’s review tomorrow,” according to emails reviewed by The New York Times.

A staff lawyer complied with an order to send a letter to the group on Aug. 7 notifying them the case had been opened, but said her team would “appreciate a discussion about the legal theory and, much simpler, the time frame/scope of the investigation.” On Aug. 8, after the letter was issued, the enforcement director ordered members of the team to start drafting a request for data, saying they would “talk in the future about the precise legal framework to apply.”

After Mr. Bensing revealed the correspondence to The Washington Blade, Mr. Marcus ordered an investigation of the disclosures. Mr. Bensing confessed, and said he faced retaliation and left the department in January. His whistle-blower complaint, first reported by HuffPost, was dismissed. In May, the department ruled that policies in Connecticut that allow transgender students to participate in athletics based on gender identity violate federal civil rights law.

“They just interpreted the law the way they wanted to, and more than that, they used those interpretations to attack people,” Mr. Bensing said. “As a former civil servant, my fear is that this administration, and Ken Marcus in particular, has tarnished the reputation of our government so much that no one is ever going to have any faith in how our federal government interprets our civil rights protections ever again.”

Mr. Marcus declined to discuss the complaints against him, but Education Department officials defended his handling of the Rutgers and Connecticut cases against what they called “recycled claims” by organizations opposed to Mr. Marcus’s “longstanding work to fight anti-Semitism.”

Other matters “relate to ongoing enforcement matters on which we cannot comment,” the department said in a statement, continuing, “We would note that all of the claims amount to criticism that Assistant Secretary Marcus has been overly vigorous in his opposition to various forms of discrimination.”

The department said that Mr. Marcus’s resignation was not connected to the complaints.

On July 9, Mr. Marcus said on Twitter that he was returning to private life. The next day, the Louis D. Brandeis Center, the Jewish civil rights group he oversaw before joining the administration, announced that he would return as chairman of its board on Aug. 1.