We may have to wait for winners

Whatever happens in races from Kentucky to New York on Tuesday may not be immediately known. Because of the high number of voters casting absentee ballots, the final results will not be tabulated for days. So, in a close race, it may not be clear who won on Tuesday night or even Wednesday.

In New York, absentee ballots are not fully counted until a week after the election. And those ballots could represent about half of all votes cast in the primary.

In Kentucky, absentee ballot requests have soared in the state’s two largest cities, Louisville and Lexington. Yet a number of jurisdictions have indicated that on Tuesday, they will only tabulate votes cast that day, or those cast that day combined with those cast during in-person early voting.

That would mean that potentially hundreds of thousands of absentee votes would not be counted until after Tuesday evening.

Representative Eliot L. Engel, a 31-year incumbent who represents the 16th District in the Bronx and Westchester County, is trying to fend off a vigorous challenge from his left in a Democratic primary seen as a test of the establishment’s capacity to weather its emboldened left wing.

His top challenger is Jamaal Bowman, a middle school principal who has been endorsed by prominent progressives, including Representative Alexandria Ocasio-Cortez of New York and Senators Bernie Sanders of Vermont and Elizabeth Warren of Massachusetts.

Heedful of Ms. Ocasio-Cortez’s upset two years ago in a neighboring district, the Democratic leadership — from House Speaker Nancy Pelosi to Senator Chuck Schumer — has lined up behind Mr. Engel. In a sign of how vulnerable Mr. Engel has become, even Hillary Clinton stepped in to support him last week, her first endorsement in a 2020 House primary race. 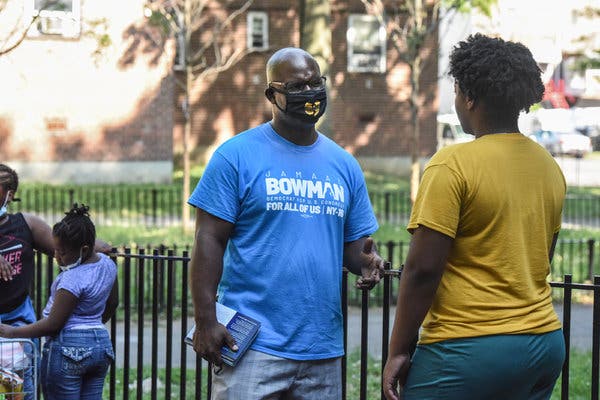 Mr. Bowman has benefited from a string of fortuitous events. A fellow candidate recently dropped out and endorsed him. And earlier this month, before a news conference on police violence, Mr. Engel was caught on a microphone asking to speak and saying, “If I didn’t have a primary, I wouldn’t care.”

It remains to be seen whether that will be enough to overcome Mr. Engel’s name recognition and financial backing, and compensate for the fact that Mr. Bowman was unable to run a sprawling door-knocking operation because of the pandemic.

Only one Democratic incumbent has lost a primary so far in 2020.

A crowded race in the country’s most Democratic district

The race in the 15th District in the South Bronx to replace Representative Jose E. Serrano, who is stepping down, is perhaps one of the most peculiar Democratic primaries in the country.

The district is the bluest congressional district in the nation: Ms. Clinton won it with 93.7 percent of the vote in 2016. Yet the perceived front-runner is Rubén Díaz Sr., a socially conservative Pentecostal minister with a history of making homophobic remarks and who is considering voting for President Trump in November.

That’s partly because a total of 12 candidates have crowded the ballot, splintering the support for a more liberal candidate. Mr. Díaz Sr. also has deep roots in the district following years in the City Council and State Senate.

The lack of unity within the party’s left flank could hurt progressives.

City Councilman Ritchie Torres, the first openly gay elected official in the Bronx, who describes himself as a pragmatic progressive, is ahead in fund-raising. He has insisted that candidates with “no real path” should drop from the race.

The Democratic Socialists of America and Ms. Ocasio-Cortez have backed Samelys López, an activist. For democratic socialists, the primary will be a test of their influence and how much traction their platform gains in one of the poorest and heavily minority areas in the country.

In 2018, as a progressive fervor swept the nation in the wake of President Trump’s election, Representative Carolyn Maloney was one of four longtime Democratic House members from New York City to face spirited primaries from the left.

But Ms. Maloney’s challenger, Suraj Patel, garnered an impressive 41.2 percent of the vote. Mr. Patel, a hotel executive, is looking to capitalize on that result and his increased name recognition on Tuesday to try and defeat Ms. Maloney, a 14-term congresswoman who represents the 12th District.

Lauren Ashcraft, a democratic socialist and comedian, and Peter Harrison, a housing activist, are also running in the primary. The three-way challenge could dilute the anti-establishment vote and help Ms. Maloney pull off another win.

Some political observers are keeping an eye on how a sizable exodus of constituents from the parts of Manhattan in Ms. Maloney’s district because of the coronavirus could affect turnout.

The decrease in population could translate into a drop in base support for the incumbent, though all eligible voters are able to vote absentee. More than 700,000 voters in New York City alone have requested absentee ballots, an astronomical number compared to past elections.

A race to face off against Mitch McConnell

Whoever wins the Democratic Senate primary in Kentucky, a race between State Representative Charles Booker and Amy McGrath, a former Marine pilot, will face an uphill fight against Mitch McConnell, the Senate majority leader, in a state President Trump carried by nearly 30 points four years ago.

Mr. Booker is expected to run up a large margin in Louisville, his hometown and the largest city in the state, so the question is whether Ms. McGrath can overcome that advantage in more-rural eastern and western Kentucky.

Working in her favor is the nature of voting in the coronavirus age: state leaders aggressively pushed absentee voting, so Ms. McGrath banked a number of ballots from voters well before Mr. Booker’s late surge.