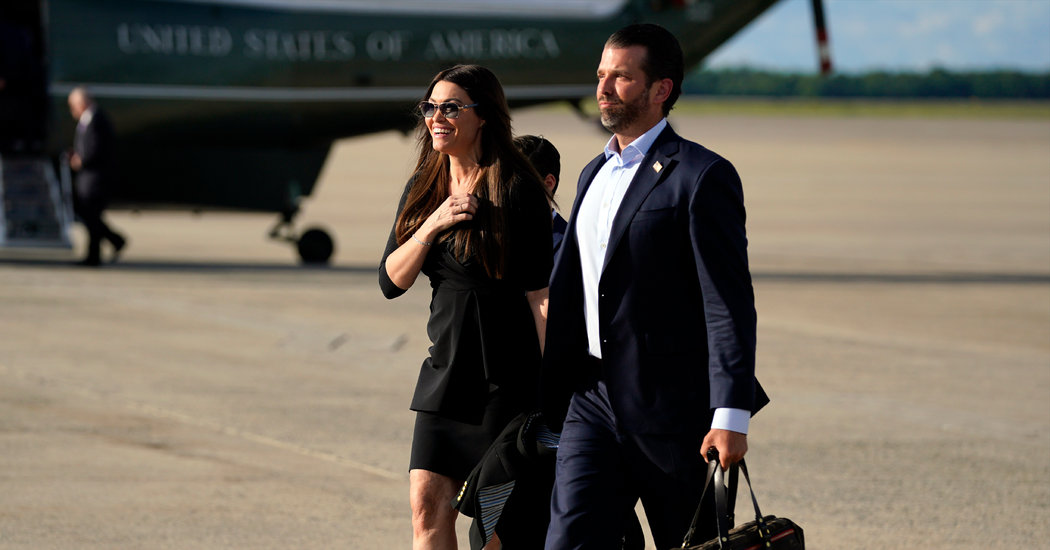 Kimberly Guilfoyle, the girlfriend of President Trump’s eldest son and a top fund-raising official for the Trump re-election campaign, tested positive for the coronavirus on Friday before a Fourth of July event at Mount Rushmore, a person familiar with her condition said.

Ms. Guilfoyle traveled to South Dakota with Mr. Trump’s son Donald Trump Jr., in anticipation of attending a huge fireworks display where the president was set to speak. They did not travel aboard Air Force One, according to the person familiar with her condition, and she was the only person in the group who tested positive.

As a routine precaution, people who come in close contact with Mr. Trump are screened for the virus.

Ms. Guilfoyle is the third person in possible proximity to Mr. Trump known to have contracted the virus. A personal valet who served Mr. Trump his food and the press secretary for Vice President Mike Pence tested positive for the virus in May.Ms. Guilfoyle was not experiencing symptoms, the person familiar with her condition said. She and the younger Mr. Trump never met up with the president’s entourage, the person said. Out of caution, the couple plans to drive back from South Dakota to the East Coast, the person said.

Still, that another person who was expected to be near Mr. Trump tested positive — and someone who most staff aides consider a member of the Trump family — is likely to renew attention around potential risks to the president.

Ms. Guilfoyle attended Mr. Trump’s indoor rally last month in Tulsa, Okla. Before and since then, some campaign staff and Secret Service personnel have tested positive for the coronavirus. Herman Cain, a former Republican presidential candidate who was also at the rally, said this week that he had been hospitalized with the virus.

Sergio Gor, the chief of staff for the Trump Victory Finance Committee, said in a statement that Ms. Guilfoyle “was immediately isolated to limit any exposure.” He added, “She’s doing well, and will be retested to ensure the diagnosis is correct since she’s asymptomatic, but as a precaution will cancel all upcoming events.” The younger Mr. Trump, despite testing negative, was self-isolating and canceling public events as a precaution, Mr. Gor said.

Even as outbreaks have emerged in the South and West and as states across the country report a record number of cases each day, White House officials — and Mr. Trump in particular — have minimized their focus on the virus in public appearances. In an interview on Wednesday, the president indicated that he believed the virus was “going to sort of just disappear.”

The president’s aides recently modified protocols for people entering the White House grounds, abandoning routine temperature checks, for instance. They have counseled people experiencing symptoms typical of the coronavirus to stay away.

But people who come in proximity to Mr. Trump and Mr. Pence are still tested for the coronavirus.