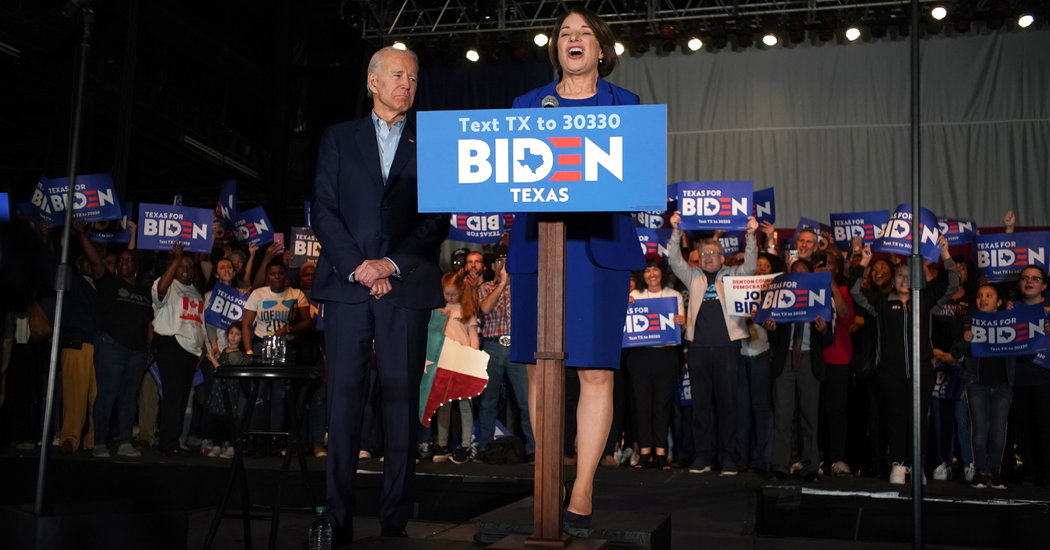 WASHINGTON — Senator Amy Klobuchar of Minnesota announced late Thursday that she was withdrawing from consideration to be the running mate to former Vice President Joseph R. Biden Jr. on the Democratic ticket.

Ms. Klobuchar, who mounted her own campaign for the presidency before dropping out and becoming one of Mr. Biden’s most spirited surrogates, said during an MSNBC interview that she called Mr. Biden Wednesday night and told him he should choose a woman of color to be his running mate.

Ms. Klobuchar, a moderate and veteran of the Senate like Mr. Biden, was known to have a strong rapport with the presumptive Democratic nominee, and was an early favorite of a significant number of his donors and supporters. But her case for being Mr. Biden’s running mate was badly damaged after the Memorial Day killing of George Floyd in the custody of Minneapolis police officers. The death, which has prompted weeks of demonstrations and protests against police violence across the country, led to renewed scrutiny of Ms. Klobuchar’s career as a local prosecutor in Minneapolis.

“After what I’ve seen in my state and what I’ve seen across the country, this is a historic moment and America must seize on this moment,” she said. “I truly believe, as I told the vice president last night, that I believe that this is a moment to put a woman of color on that ticket.”

Mr. Biden committed to naming a woman as his vice-presidential pick during a debate with Senator Bernie Sanders on March 15. His team’s search committee has contacted roughly a dozen women, and eight or nine are being vetted more intensively, according to people familiar with the process.

Several new and lesser known contenders have recently ascended in the process as the national debate over racial justice amplifies calls for Mr. Biden to select a woman of color. Among that group are Representative Val Demings of Florida and Mayor Keisha Lance Bottoms of Atlanta. Senator Kamala Harris of California is widely regarded as a strong candidate to be Mr. Biden’s running mate.

Mr. Biden’s campaign had no comment Thursday night. Symone D. Sanders, a senior Biden adviser, wrote in a tweet that she still expected Ms. Klobuchar to be a strong advocate for the former vice president’s campaign.

Ms. Klobuchar was still being vetted until her Wednesday night phone call to Mr. Biden, according to a person familiar with Mr. Biden’s running mate selection process. But in conversations earlier this week, Ms. Klobuchar suggested to friends that she recognized that her own history made it difficult for Mr. Biden to select her, given the widespread Black Lives Matter protests.

One person she spoke with on Monday said Ms. Klobuchar relayed then that she understood she would not be selected “because of the police stuff.”

Ms. Klobuchar’s declaration that Mr. Biden should choose a woman of color created something of an awkward political dynamic for Senator Elizabeth Warren of Massachusetts, another former presidential rival who is being considered by Mr. Biden as a possible running mate. Ms. Warren is the most prominent and formidable white candidate in the running, and she is far along in the vetting process.

Other white candidates under consideration include Senator Tammy Baldwin of Wisconsin, Gov. Gretchen Whitmer of Michigan and Gov. Gina Raimondo of Rhode Island.

Asked by the MSNBC host Lawrence O’Donnell if her past record as a prosecutor would have made it difficult for her to “function” as Mr. Biden’s running mate, Ms. Klobuchar said it was not a factor in her decision.

“I think I could have functioned fine,” she said. “There’s a lot of untruths out there about my record and now is not the time to debate them.”