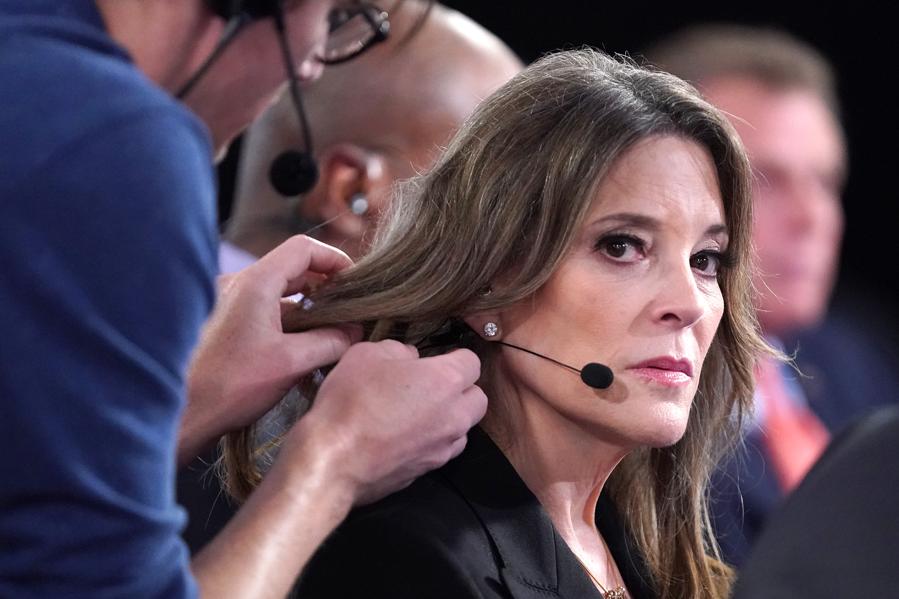 In the afterglow of Democratic presidential candidate Joe Biden’s Super Tuesday primary success, former candidate Marianne Williamson launched a bitter accusation about the reasons for his big night. It was, she alleged, due to meddling by other former candidates who were now colluding to slow a front-running Bernie Sanders.

In politics, such coordinating and alliance-building is known as, well, politics. One could even say Williamson had engaged in the same by endorsing Sanders after ending her own bid for the Democratic nomination. But for Williamson, new the support for Biden represented something far more sinister: In a now-deleted tweet, she described it as a “coup” by reactionary forces.

An earlier tweet of hers declared that candidates Pete Buttigieg and Amy Klobuchar dropped out and endorsed Sanders’ chief rival because “they must have read ‘The Art of the Deal,’” seeming to imply that they did so not out of political conviction but for personal gain.

For some people who deeply valued Williamson’s spiritual leadership in her heyday, including myself, her evolution into a political street brawler is an unfortunate one that diminishes a legacy she built over decades.

Let’s go back in time. Before Marianne Williamson purveyed political rage, she cautioned against resentment and anger.

Before she was a critic of evil corporate forces and a promulgator of conspiracy theories, she was a champion of unconditional acceptance, non-judgment and emotional healing.

With flair, wit and a zen-like perspective, she preached that fear and anger generally were the result of a misperception of life’s flow and processes. She insisted that understanding others and embracing them, exactly as they are, could overcome any division. And she resisted condemning anyone as evil.

Williamson argued that you can either keep your eyes on heaven or on a messy earth, but not on both. “The vision of one world comes at the expense of the vision of the other,” she often said, repeating a key tenet of A Course in Miracles, a new-age book that inspired much of her teaching.

The irony is that Williamson gradually, then more eagerly, then completely, shifted her own vision from the higher dimensions she spoke of to the trenches of worldly conflicts.

In recent years, she adopted a new motto: “If you’re not angry, you’re not paying attention.”

In other words, things that she long maintained were illusions and distractions had become deeply real to her. She maintained the religious zeal, but did an effective u-turn regarding many of her actual beliefs about reality.

It’s a little like Siddhārtha Gautama getting up from under the Bodhi tree, saying, “To hell with this, it’s time to start knocking some heads together.” 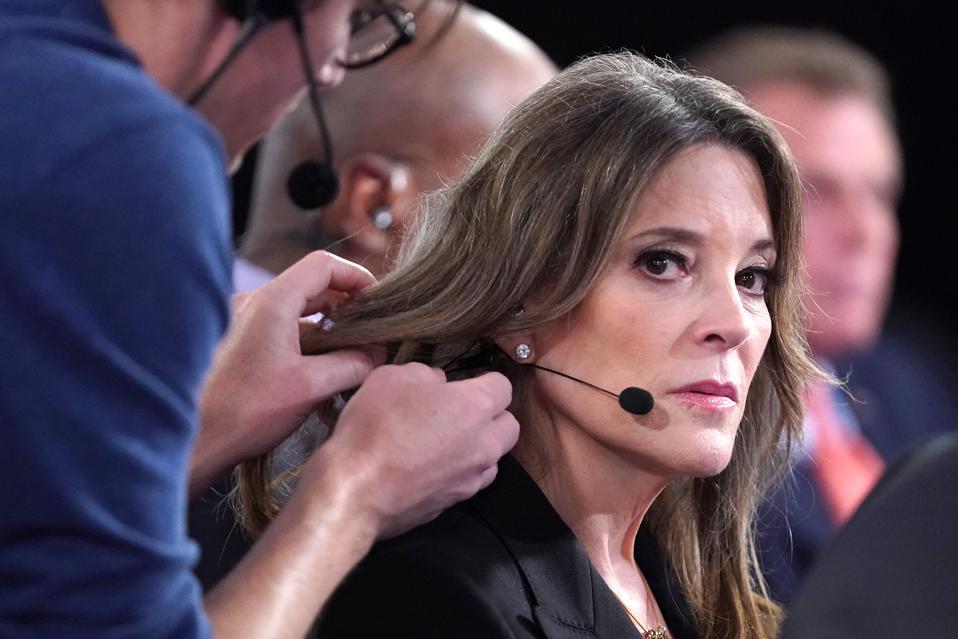 Marianne Williamson responded to the siren call of politics; the move hasn’t served her well. (Photo … [+] by Scott Olson/Getty Images)

We have to consider the origins of A Course in Miracles, which Williamson and others have viewed as a modern form of divine revelation. The book offers some psychological wisdom within a framework not unlike Christian Science. Critics say that it fueled some of Williamson’s quirkier positions, in which she sometimes put more trust in prayer than in 21st century medicine. Over time, that anti-interventionist mentality led her to irresponsibly denounce antidepressants as a pharmaceutical industry scam and even wade clumsily into the vaccine controversy.

Williamson grew steadily more militant, turning her weekly lectures (which I’d attended off and on since the late 1980s) into regular tirades against Big Pharma and Wall Street. She ran unsuccessfully for Congress in 2014, then began campaigning in 2016 for a candidate apropos of her political anger, Bernie Sanders, and morphed into a fully political figure: At some point, in Williamson’s mind, the only appropriate assimilation of the shared spiritual wisdom of the ages was political radicalism, overlaid with the veneer of her familiar words about love and healing.

More than a year ago, she mounted her quixotic pursuit of the presidency, then abandoned it at the beginning of this year. But she still hasn’t left politics behind and is obviously now turning up the volume on accusations that dark forces are undermining the noble efforts of her political tribe.

Power may corrupt, but Williamson never even attained political power. What has hurt her is what hurts many spiritual leaders: The inability in the end to believe what they preach.