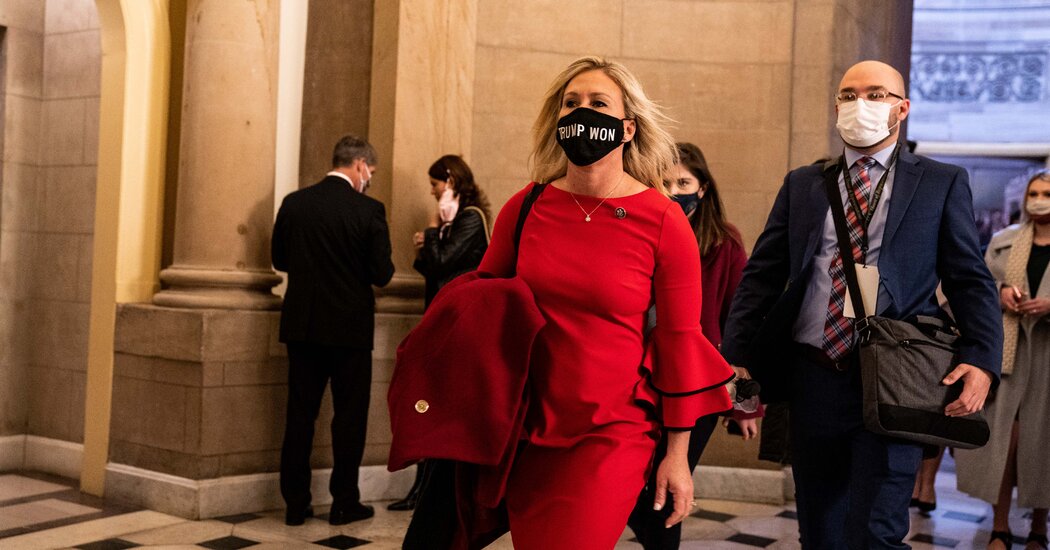 On the campaign trail, Ms. Greene presented herself as a deeply conservative, pro-Trump Christian mother and business owner, arguing that her work in the construction industry had imbued her with the toughness that comes from working in a male-dominated field. She railed against the ascendant progressive wing in Congress, emphasized the importance of the Second Amendment while toting an AR-15, and warned of “thousands” of immigrants “pouring over” the southwestern border.

Ms. Greene largely veered away from the conspiratorial on the trail, though she did cut a campaign ad claiming that “‘Deep State’ actors tried to sabotage President Donald J. Trump before he even took office” and claimed on her campaign accounts that George Soros, the billionaire investor and Democratic donor, was “bankrolling left-wing movements worldwide who want to destroy Israel.”

The messaging raised alarm at the time among House Republican leaders and some members of the Georgia delegation who worried that if elected, Ms. Greene could create a grave problem for their party. But they never mobilized to defeat her. While the top three House Republicans condemned a series of racist videos Ms. Greene made, surfaced by Politico, only Representative Steve Scalise of Louisiana, the No. 2 Republican, endorsed Dr. Cowan. Mr. McCarthy and Representative Liz Cheney of Wyoming, the third-ranking leader, stayed neutral.

Privately, according to a person familiar with their thinking, top Republicans hoped that outside groups would swoop into the primary race in support of Dr. Cowan and weaponize Ms. Greene’s incendiary comments against her, dooming her candidacy. But the outside effort never materialized.

Instead, Ms. Greene’s campaign received an important boost when the political arm of the ultraconservative Freedom Caucus endorsed her, as did Representatives Andy Biggs of Arizona, the group’s chairman, and Jim Jordan of Ohio, a founder. She handily won the runoff in August and cruised to victory in November.

That left Republican leaders hoping that, once sworn in, Ms. Greene would clean up her act, disavowing her past comments and dialing back her outlandish rhetoric.

Instead, she charged into Congress and immediately faced scrutiny for her support of the “Stop the Steal” campaign that falsely claimed that Mr. Trump had won the 2020 presidential election.