WASHINGTON — Defense Secretary Mark T. Esper broke with President Trump on Wednesday and said that active-duty military troops should not be sent to control the wave of protests in American cities, at least for now. His words were at odds with his commander in chief, who on Monday threatened to do exactly that.

Mr. Esper’s comments reflected the turmoil within the military over Mr. Trump, who in seeking to put American troops on the streets alarmed top Pentagon officials fearful that the military would be seen as participating in a move toward martial law.

Speaking at a news conference at the Pentagon, the defense secretary said that the deployment of active-duty troops in a domestic law enforcement role “should only be used as a matter of last resort and only in the most urgent and dire of situations.”

The president was angered by Mr. Esper’s remarks, and excoriated him later at the White House, an administration official said. Asked on Wednesday whether Mr. Trump still had confidence in Mr. Esper, the White House press secretary, Kayleigh McEnany, said that “as of right now, Secretary Esper is still Secretary Esper,” but that “should the president lose faith, we will all learn about that in the future.”

Senior Pentagon leaders are now so concerned about losing public support — and that of their active-duty and reserve personnel, 40 percent of whom are people of color — that Gen. Mark A. Milley, the chairman of the Joint Chiefs of Staff, released a message to top military commanders on Wednesday affirming that every member of the armed forces swears an oath to defend the Constitution, which he said “gives Americans the right to freedom of speech and peaceful assembly.”

Mr. Esper and General Milley acted after they came under sharp criticism, including from retired military officers, for walking with Mr. Trump to a church near the White House after peaceful protesters had been forcibly cleared.

Mr. Trump responded late Wednesday on Twitter to Mr. Mattis’s rebuke, saying that he had had “the honor of firing” Mr. Mattis. In reality, Mr. Mattis resigned in protest in December 2018 over Mr. Trump’s decision to withdraw American troops from eastern Syria.

“His primary strength was not military, but rather personal public relations. I gave him a new life, things to do, and battles to win, but he seldom ‘brought home the bacon,’” the president tweeted. “I didn’t like his ‘leadership’ style or much else about him, and many others agree. Glad he is gone!”

Other former military figures were less focused on Mr. Trump than on the specter of the military being used to police protesters.

“We are at the most dangerous time for civil-military relations I’ve seen in my lifetime,” Adm. Sandy Winnefeld, a retired vice chairman of the Joint Chiefs of Staff, said in an email. “It is especially important to reserve the use of federal forces for only the most dire circumstances that actually threaten the survival of the nation. Our senior-most military leaders need to ensure their political chain of command understands these things.”

Pentagon officials note that the military is trained in using lethal power against foreign adversaries, not in law enforcement, and what is appropriate in Falluja is not in Farragut Square.

On Monday, after major protests over the weekend across the United States, as well as late-night looting, Mr. Trump had discussed invoking the little-used 1807 Insurrection Act to deploy active-duty troops in American cities. He was dissuaded by General Milley and William P. Barr, the attorney general, officials said. Officials said Mr. Esper initially seemed to back the president’s position. Still, on Monday in the Rose Garden, Mr. Trump declared himself “your president of law and order.” 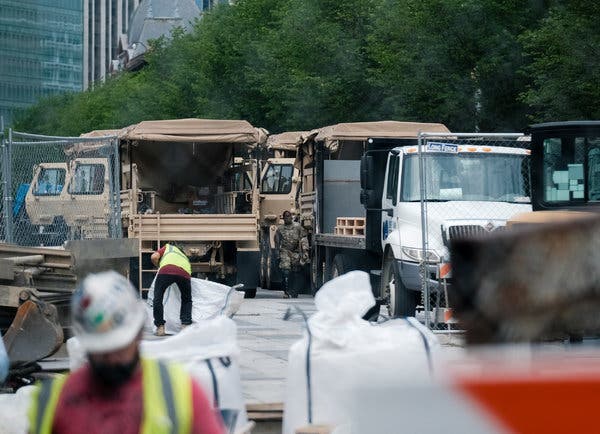 Military vehicles on Wednesday near the White House.Credit…Michael A. McCoy for The New York Times

Whether or not he had ever intended to make good on his threat, about 1,600 troops had been ordered to hold at bases just outside Washington, with soldiers drawn from a rapid-reaction unit of the 82nd Airborne Division at Fort Bragg, N.C., and a military police unit at Fort Drum, N.Y. More than 2,000 National Guard forces are already inside the city, a number that is expected to double in the next few days.

The Army had made a decision to send a unit of the 82nd Airborne’s rapid deployment force, about 200 troops, home from the capital region. But Mr. Trump ordered Mr. Esper during the angry meeting at the White House to reverse it, the administration official said. The reversal was first reported by The Associated Press.

Despite calls for calm from senior Pentagon leaders, the troops on the ground in Washington on Wednesday night appeared to be ramping up for a more militarized show of force. National Guard units pushed solidly ahead of the police near the White House, almost becoming the public face of the security presence. They also blocked the streets with Army transport trucks and extended the perimeter against protesters.

Although Mr. Esper’s comments at the Pentagon made clear that a rise in violence in cities nationwide could prompt a change in his stance, his statement was clear. Saying that the Insurrection Act should be invoked only in the “most urgent and dire of situations,” he added that “we are not in one of those situations now.”

Mr. Esper, a West Point graduate who once served in the 101st Airborne Division, said, “I do not support invoking the Insurrection Act.”

At the White House, Ms. McEnany said that, for now, Mr. Trump was “relying on surging the streets with National Guard.” But, she noted: “The Insurrection Act is a tool available. The president has the sole authority and, if needed, he will use it.”

General Milley has been able to influence Mr. Trump in ways that Mr. Esper, who the president views with skepticism, has not, White House officials said.

Mr. Esper’s explicit opposition to invoking the act came only days after he described the country as a “battle space” to be cleared, a comment that drew harsh condemnation from a number of former senior military officials — the kind who usually do not criticize the successors across the Pentagon leadership. The use of the term, bandied about in battlefield command centers, implies a piece of terrain, disassembled in grid squares, characterized by threats and awaiting one solution: military force through violence.

Mr. Esper also backtracked about what he knew beforehand about Mr. Trump’s visit to a church across from the White House.

Mr. Esper said this week that he was unaware of his destination when he set out with the president on Monday night for what he thought was a visit to view troops near Lafayette Square. “I didn’t know where I was going,” Mr. Esper told NBC News in an interview on Tuesday. “I wanted to see how much damage actually happened.”

White House officials were furious, and Mr. Esper tried to walk back his comments on Wednesday. He acknowledged that he did know that he was accompanying Mr. Trump to St. John’s Church for what turned out to be a photo op after the authorities used some form of chemical spray against protesters to clear the way.

Mr. Esper also said it took nearly 24 hours for the authorities to determine that a flight of helicopters that descended to rooftop level — kicking up debris and sending peaceful protesters running for cover — belonged to the District of Columbia National Guard. He said that episode was under investigation.

Mr. Esper’s remarks about the delay in finding information on the helicopter mission stand in stark contrast to the level of military planning that occurred beforehand. An email obtained by The New York Times indicated that Ryan McCarthy, the Army secretary, and Gen. James C. McConville, the Army chief of staff, made clear their intent for the evening, including the clearance of airspace. The two men, officials said, were on hand in a command center in Washington belonging to the F.B.I., where they pored over maps, looking at streets.

Compounding the problematic use of military helicopters to intimidate protesters was the fact that one of the aircraft, a Lakota helicopter, was adorned with a red cross, denoting its medical and, therefore, not hostile affiliation.

Perhaps the most tortured of the Pentagon top leadership so far has been General Milley, who is seen clearly in a video of the movement across Lafayette Square walking behind Mr. Trump and wearing combat fatigues. General Milley, who has since been criticized from a host of voices, both military and civilian, spent the hours after the photo op walking the streets of Washington talking to National Guards troops there.

He spoke of the need to protect the peaceful protests, in remarks that appeared jarring to some because they came in the hours after the president’s photo op.

The comments from Mr. Esper and the letter from General Milley followed a memo on Monday night from the Air Force chief of staff, Gen. David L. Goldfein, deploring as a “national tragedy” the killing of George Floyd, who died after he was in police custody in Minneapolis. General Goldfein said that every American “should be outraged.”

Since then, other messages to the armed forces have been released by several service chiefs and secretaries — all carefully drafted and in no way criticizing Mr. Trump or his policies, but expressing solidarity with American values and the military’s history of staying out of politics.

General McConville and Mr. McCarthy sent a letter to troops and their families underscoring the “right of the people peaceably to assemble and to petition the government for a redress of grievances.”

The Navy’s top officer, Adm. Michael M. Gilday, said in a message on Wednesday to all sailors: “I think we need to listen. We have black Americans in our Navy and in our communities that are in deep pain right now. They are hurting.”

And Chief Master Sgt. Kaleth O. Wright of the Air Force, who is black, wrote an extraordinary Twitter thread declaring, “I am George Floyd.”