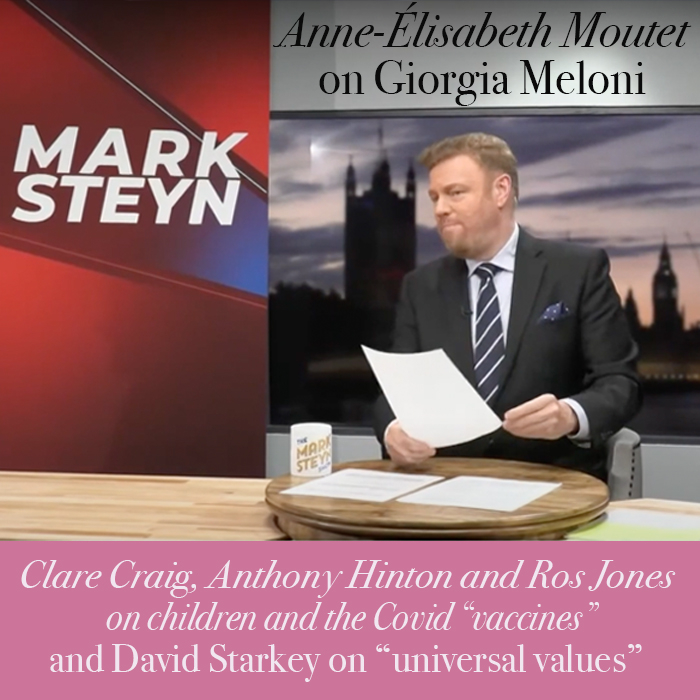 Monday’s edition of The Mark Steyn Show started with Mark’s take on the media and their responsibility for the wreckage all around. His first guest was Anne-Élisabeth Moutet with her view of Italy’s new prime minister – the second coming of Il Duce, according to the BBC, CBS et al.

Next up was a trio of respected doctors – Clare Craig, Tony Hinton, Ros Jones – on their visit to Downing Street to ask His Majesty’s Government to end the reckless vaccination of children – as Denmark and Norway have ended it.

Historian David Starkey rounded out the hour with some thoughts on how so-called “universal values” have eclipsed democracy and self-government.

All that plus your comments and questions along the way. Click below to watch:

Tomorrow Mark will be back for Tuesday’s Steyn Show, live at 8pm BST – that’s 3pm North American Eastern. (US and Canadian viewers may find the replay more convenient: that screens at 9pm Eastern/6pm Pacific.) Immediately afterwards, Mark will be back with Mister Snerdley, James Golden, live on New York radio powerhouse 77 WABC at 4pm eastern.

Among the benefits of membership in The Mark Steyn Club are Comment Club privileges, so Steyn Clubbers please have at it below.