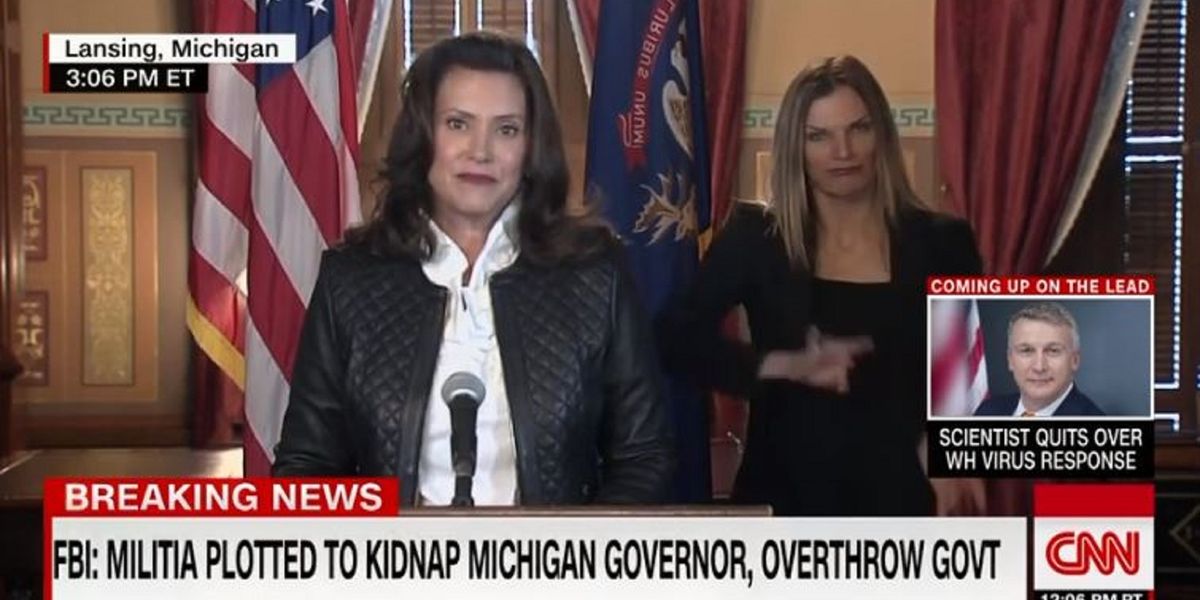 Michigan Gov. Gretchen Whitmer (D) held a press conference Thursday after it was revealed that federal authorities arrested several men allegedly involved in a plot to kidnap her and overthrow the state government.

The governor took the opportunity to accuse President Donald Trump of being “complicit” with “hate groups” such as the suspects accused of plotting to abduct her.

The U.S. Attorney’s Office in the Western District of Michigan announced the arrest of 16 people earlier in the day, who were allegedly involved in conspiring to kidnap Whitmer at her vacation home.

According to the Department of Justice’s news release, suspects involved “conducted coordinated surveillance” on Whitmer’s vacation house, and one “even inspected the underside of an M-31 highway bridge for places to seat an explosive” in order to distract the police while carrying out their plan. They also allegedly discussed purchasing a TASER to use during the abduction.

Whitmer responded by first expressing her gratitude to law enforcement for stopping the plot, before taking aim at Trump over the ordeal in an attempt to link his rhetoric to the alleged crime.

According to the Chicago Tribune, “There’s no indication in the criminal complaint that the men arrested were inspired by Trump. Authorities also have not publicly said whether the men were angry about Whitmer’s coronavirus orders, which sharply curtailed businesses and individuals in an effort to slow the spread of the [corona]virus.”

As the public awaits further details about the motive behind the alleged plot, footage has emerged of one suspect, Brandon Caserta, lambasting President Trump as “a tyrant” and “enemy” while he sits in a room with an anarchist flag in the background.

Wow! This is big. Brandon Caserta, one of the ringleaders of the group of men arrested for a plot where the group p… https://t.co/hweUPZ9Oqz

Nonetheless, Whitmer during her press conference pointed to last week’s presidential debate where the president told the Proud Boys — who claim they condemn white supremacy — to “stand back and stand by.” The governor said that Trump “refused to condemn white supremacists and hate groups like these two Michigan militia groups.”

In response to Whitmer’s remarks, White House press secretary Kayleigh McEnany said, “”President Trump has continually condemned white supremacists and all forms of hate. Governor Whitmer is sowing division by making these outlandish allegations. America stands united against hate and in support of our federal law enforcement who stopped this plot.”

Michigan Attorney General Dana Nessel (D) also attacked Trump when she was asked by CNN anchor Anderson Cooper what her message was to Americans following the arrests of the suspects.

Nessel’s conclusion was, “We can no longer afford in this nation to have our elected leaders like the president of the United States sending not just winks and nods — and I hear it frequently called a dog whistle. It’s not a dog whistle to these folks, it’s literally a command to action for domestic terrorists.”