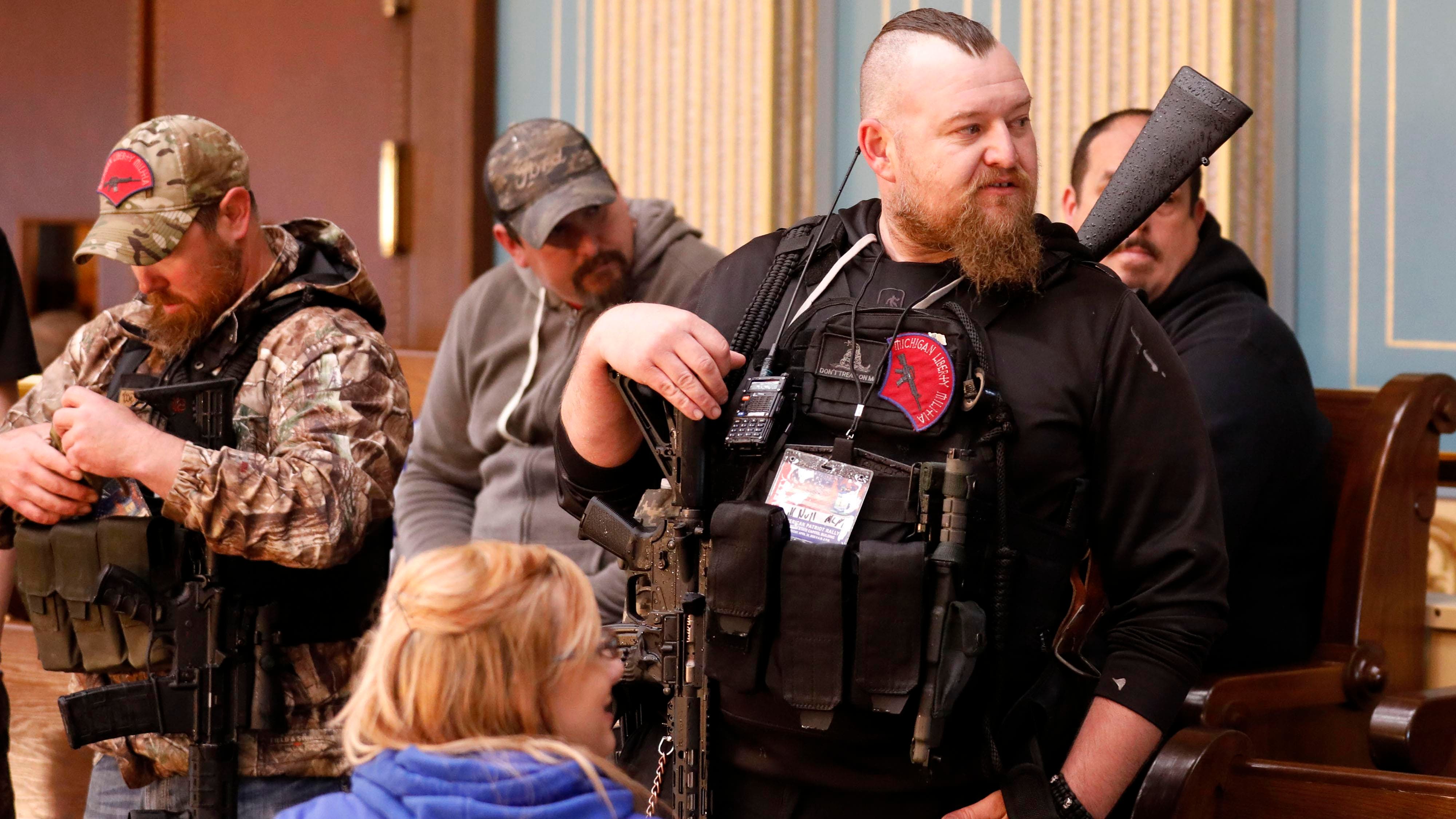 Following the arrest of six men earlier this week for their alleged involvement in a plot to kidnap Democratic Gov. Gretchen Whitmer before the November election, Dar Leaf, Barr County (Mich.) sheriff, said that he doesn’t have any regrets about being on stage with one of the suspects at a recent demonstration and suggested the Wolverine Watchmen militia members may have been merely planning to apprehend Gov. Whitmer to execute a citizen’s arrest. 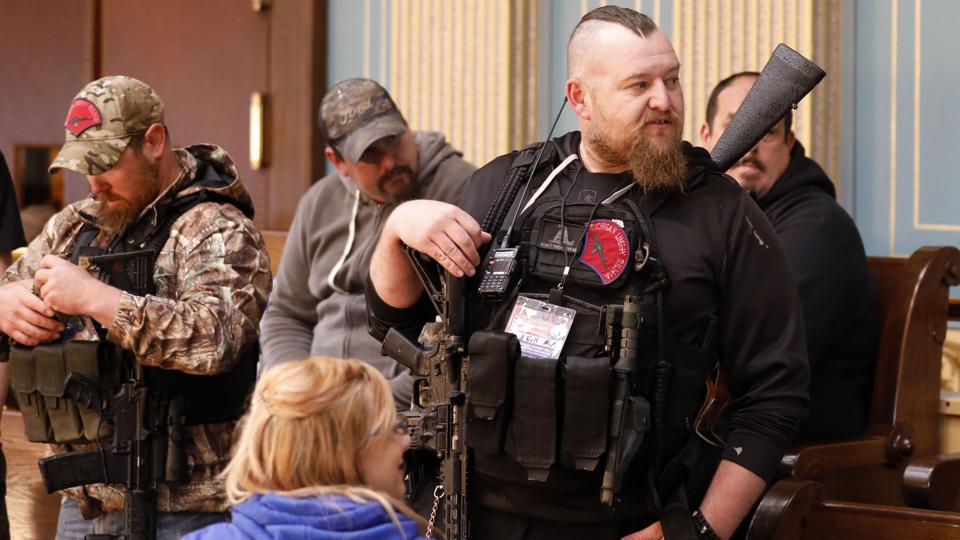 William Null (R) stands in the gallery of the Michigan Senate Chamber during the American Patriot … [+] Rally, organized by Michigan United for Liberty, to demand the reopening of businesses on the steps of the Michigan State Capitol in Lansing, Michigan, on April 30, 2020. Others are unidentified. – Thirteen men, including members of two right-wing militias, have been arrested for plotting to kidnap Michigan Governor Gretchen Whitmer and “instigate a civil war”, Michigan Attorney General Dana Nessel announced on October 8, 2020. The Nulls were charged for their alleged roles in the plot to kidnap Whitmer, according to the FBI. The brothers are charged with providing support for terroristic acts and felony weapons charges. (Photo by JEFF KOWALSKY / AFP) (Photo by JEFF KOWALSKY/AFP via Getty Images)

A pair of brothers, Michael and William Null, were among the first suspects to be arrested after the FBI raided their West Michigan homes Wednesday night, charging the two men with conspiring to kidnap the governor.

At the mid-May rally, Leaf said the governor’s quarantine measures were akin to the mass arrest of the state’s residents and called a local barber, who opened despite the governor’s order, a “little version of Rosa Parks.”

Leaf, a 30-year veteran of law enforcement, praised Michigan militia members working security detail at that event, declaring they were “the last line of defense” against an overreaching government.

“It’s just a charge, and they say a ‘plot to kidnap,’ and you got to remember that. Are they trying to kidnap? Because a lot of people are angry with the governor, and they want her arrested,” Leaf explained. “So are they trying to arrest or was it a kidnap attempt? Because you can still in Michigan if it’s a felony, make a felony arrest.”

In an interview Thursday with a local Fox News affiliate, Leaf insisted the Null brothers were “always very nice and respectful,” and that “we really, really should be careful, trying to try them in the media.” Leaf continued: “It doesn’t say if you are an elected office that you’re exempt from that arrest. I have to look at it from that angle, and I’m hoping that’s more what it is, in fact, these guys are innocent till proven guilty, so I’m not even sure if they had any part of it.”

According to the affidavit filed Thursday morning by the FBI, the six suspects complained of Michigan’s coronavirus restrictions and labeled Michigan’s governor a “tyrant” with “no checks and balances at all.” Four of the men planned to meet on Wednesday to “make a payment on explosives and exchange tactical gear” and then complete two coordinated surveillance visits to Whitmer’s vacation home.

Leaf belongs to the Constitutional Sheriffs and Peace Officers Association, a group that believes that county sheriffs retain “supreme authority within their jurisdictions to interpret the law.” Two significant issues the organization focuses on are protecting the second amendment and U.S. imagination policies. The group’s website asserts that “immigrants are not assimilating into our culture as they once did. This results in devastating consequences, culturally and economically. The vast majority of immigrants today come here illegally, many committing crimes as they do.” Leaf has stated that he refused to enforce Gov. Whitmer’s stay-at-home order. “What’s the definition of an arrest? It’s basically taking away your free will, your right to move about,” Leaf said. “And an unlawful arrest is when you do it unlawfully, so when you are ordered to your home, are you under arrest? Yeah, by definition you are.”

7,194: As of Friday morning, there have been at least 146,548 coronavirus cases and 7,194 Covid-related deaths in Michigan since the beginning of the pandemic, according to a New York Times database.