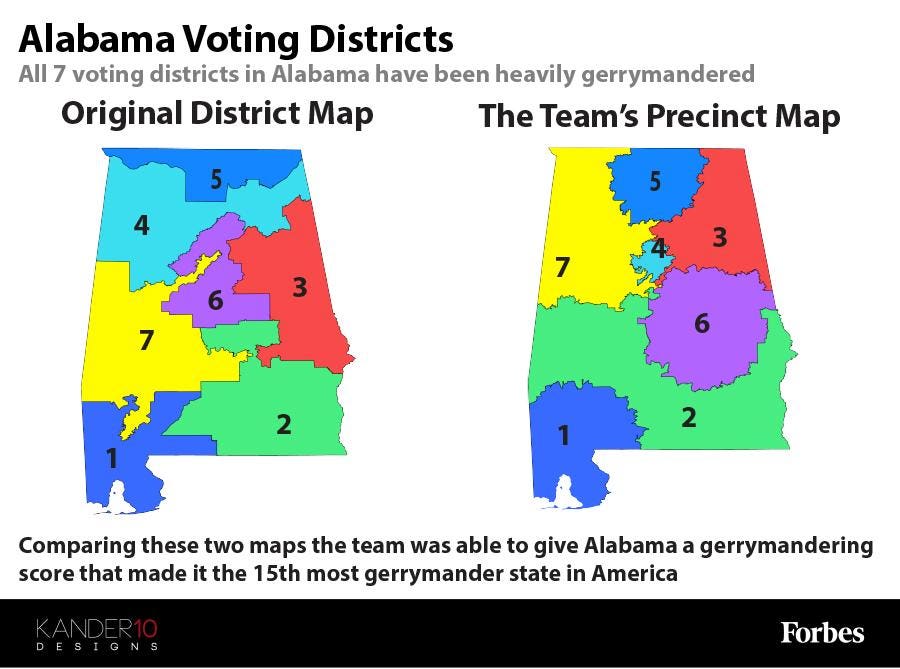 There are many serious problems facing our country right now such as racism, climate change, and political divide. One problem that has been holding back our political system for a long time (and just about everyone agrees that something needs to be done about it) is gerrymandering. Through gerrymandering, the political party in power is allowed to alter voting district boundaries to help retain their position. This is an ongoing problem in the American political system.

As the subject of their science research project, three middle school students from Niskayuna, New York, decided to take on this serious issue. In their work, Kai Vernooy, James Lian, and Arin Khare devised a way to measure the amount of gerrymandering in each state and created a mathematical algorithm that could draw fair and balanced district boundaries. The results of the project were submitted to Broadcom MASTERS, the nation’s leading middle school STEM competition run by the Society for Science & the Public, where Vernooy, 14, won the Marconi/Samueli Award for Innovation and a $10,000 prize.

What is gerrymandering and why is it a problem?

Legally speaking, political district boundaries are supposed to hold to “compactness and equality of size of constituencies.” However, the practice of gerrymandering is used to dilute the voting power of certain constituents, minorities, and other groups.

The term was originally coined in a political cartoon drawn in 1812. The then Governor Elbridge Gerry of Massachusetts helped to enact a law that defined new state senatorial districts. The outline of one of the districts was said to resemble a salamander. Cartoonist Elkanah Tisdale, at the Boston Gazette then drew a picture of a disturbing creature that was divided by and labeled with the state districts. The paper called the creature a “gerry-mander” after the Governor.

The main criticism of gerrymandering is that it subverts the will of the people. It’s a tool that helps politicians get elected and establish a majority in legislatures without getting the majority of the votes.

Kai and his team’s solution

Though middle schoolers Kai Vernooy, James Lian, and Arin Khare are not of voting age yet, they decided to use scientific research to find a solution to this prevalent issue. First, they analyzed the problem by coming up with a method to measure the level of gerrymandering present in each state. They did this by identifying political communities and regions of like-minded voters. Then they grouped those communities together to form precincts. Each precinct was adjusted to include a compact or circle-like shape, a similar population size and a similar partisanship ratio. The result was a simple representation of where groups of like-minded voters live in each state.

These precincts were then compared to actual voting districts within the state. The comparison shows the percentage of people that are in the precinct but not the district, therefore illuminating the number of people that the district fails to represent. Using this method, they were able to give each state a gerrymandering score.

To help shed some light on this process we will use Alabama as an example.  Kai explained that, “Alabama is a good example of a state that has experienced partisan gerrymandering over the last decade. In the 2010 redistricting cycle, Republicans drew district lines to pack together several major Democratic communities into a single district, ensuring that Democrats were only elected to one seat. Alabama’s District 7, shown here in yellow, reaches into several other districts’ regions to pick out Democratic voters.” 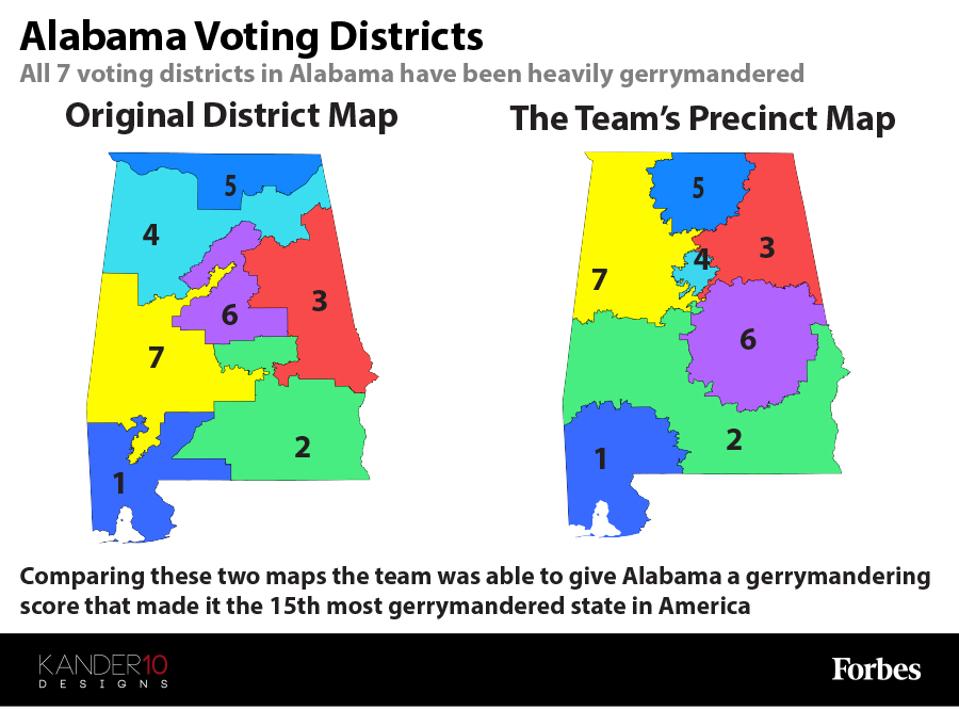 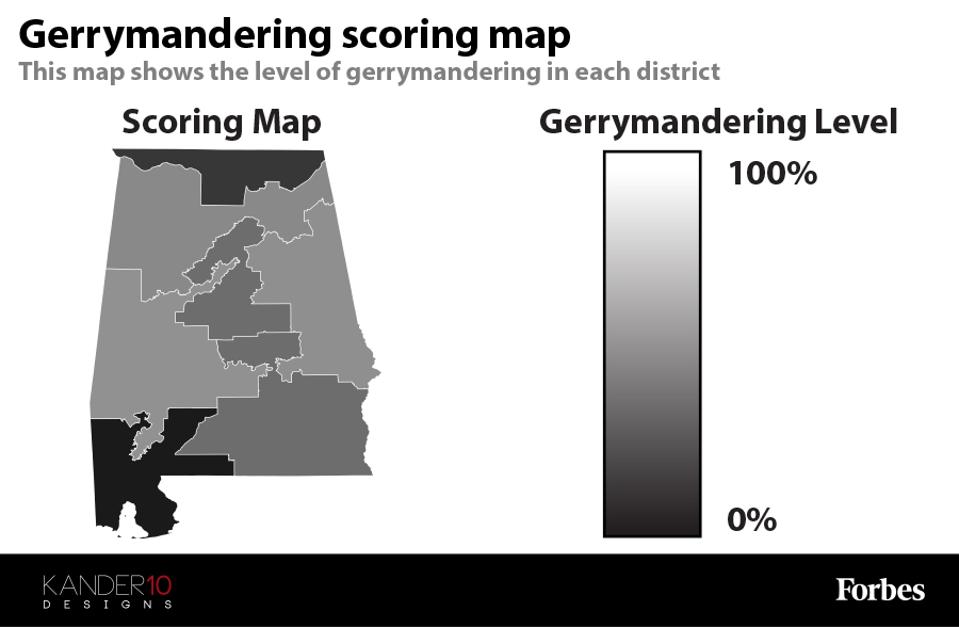 In order to create a new district map with a better score the team started with their precinct map and changed it to adhere to district population laws. In order to do this, they created another algorithm. The resulting score was 93.43% less than the previous district map. 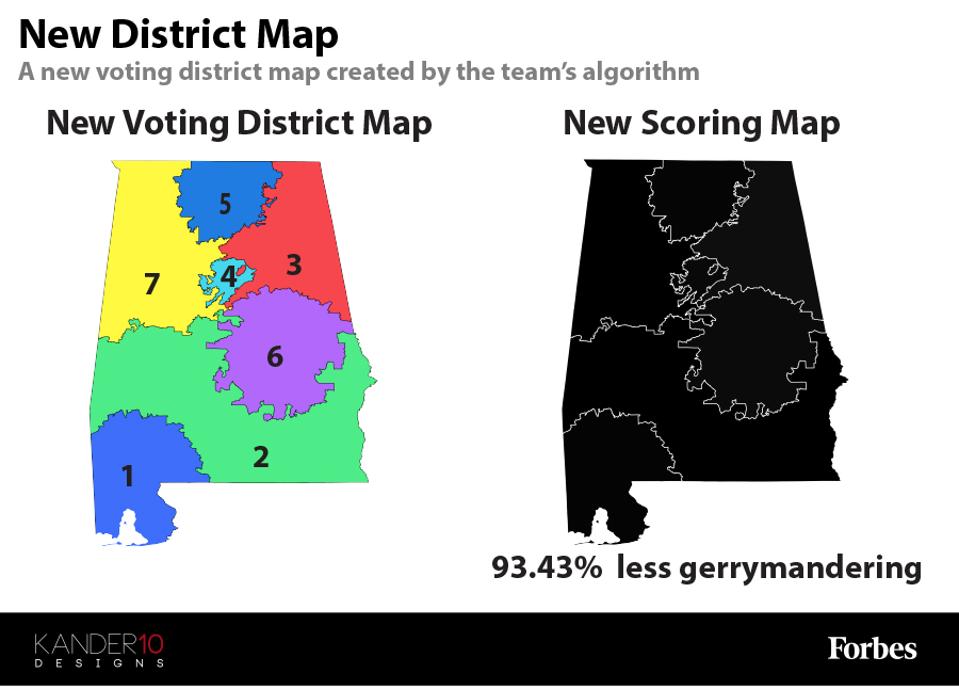 Kai and his team seem to have created a simple solution to a complicated issue. Let’s hope the right people take notice. Never doubt the power of a group of young people who want to make a difference.