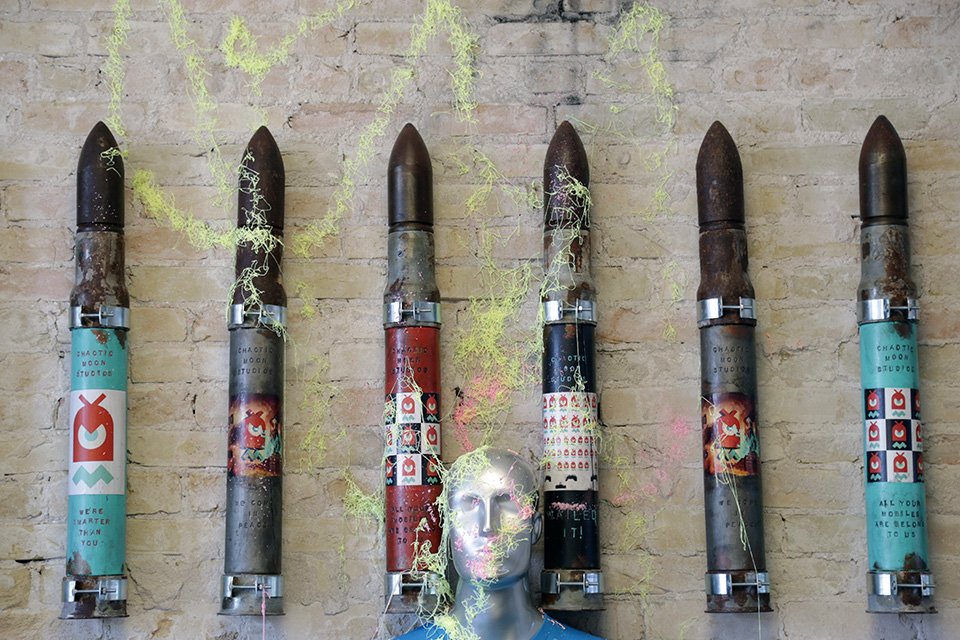 We’re still not really sure what a “creative technology studio” is, but it sure seems like a damn fun place to work. Apparently your job at one, like Chaotic Moon, is to just think of “awesome” ideas with little practical purpose and make them a reality. Why? Because you can. Last year the firm used a drone to tase a poor intern, and married an Oculus Rift to a Leap motion so we could punch sharks. This year it decided to try something a little less dangerous (and far less likely to end in a lawsuit). Tyrone Drone is a pretty standard drone with some simple modifications. Instead of holding a camera, he’s holds and fires a spray can.

One of the demos that Chaotic Moon had in mind involved having Tyrone tag up a wall with some graffiti. Unfortunately, shortly before he was set to make his big debut at SXSW, Austin police decided there would be no drones flying over the city. As you can imagine, their plans to set a dummy on fire were also scrapped. But the company did come up with a solution: replace the spray paint with silly string and move the whole shebang indoors

As you can see he still makes a mess, but at least there’s fewer toxic fumes and nobody’s clothes were permanently stained with Krylon. While flying the drone around and spraying flame everywhere was axed, we still got to see a tabletop demo. It’s pretty basic really; A mount holds a Zippo lighter a few inches in front of the drone, while an aerosol can of hair spray provides the fuel. A push of a button on the remote triggers a servo that depresses the nozzle and voilà — FIRE! And there wasn’t any need for special programming or a ton of custom hardware. The few simple parts needed were 3D printed on MakerBot Replicator 2x.

There’s also a concept for a beacon-based app that would allow Tyrone to fly to places marked with a digital tag and leave behind a spay paint one. Right now there’s no working prototype, but you can get an idea of what it might look like in the promo video below.