WASHINGTON — The United States economy faces irreparable damage from the coronavirus, the nation’s top economic policymakers warned on Tuesday, as lawmakers and the Trump administration grapple with how to restart business activity and whether additional government support is needed.

In a joint appearance before the Senate Banking Committee, Treasury Secretary Steven Mnuchin and the Fed chair, Jerome H. Powell, offered a stark assessment of the fragile state of the economy. But they offered divergent views about how to mitigate the economic hit from a virus that has shuttered significant amounts of business activity and has already thrown more than 20 million people out of work.

Mr. Mnuchin, who acknowledged a painful month ahead, suggested that an expeditious reopening of states was the key to preventing irreversible economic devastation.

“There is the risk of permanent damage” if states delay their reopenings, Mr. Mnuchin told lawmakers. While the Treasury secretary said job losses would get “worse before they get better,” he suggested that conditions would “improve in the third and fourth quarters” as states began reopening and business activity resumed.

Mr. Powell sounded a more cautious tone, saying that a full recovery would not take hold until the health crisis was resolved and people felt safe resuming normal activity. He suggested that Congress, the White House and the Fed itself might need to provide more help to carry states, households and businesses through the pandemic.

“This is the biggest shock we’ve seen in living memory,” Mr. Powell said, “and the question looms in the air of, is it enough?”

The differing views underscore the competing arguments gripping Washington as Congress and the White House begin debating the outlines of another major economic relief bill and whether to inject trillions of additional taxpayer dollars into the economy.

With an election six months away, President Trump and many Republican lawmakers have begun trying to shift the economic discussion away from more financial support to boosting the economy by reopening states and additional tax cuts. The Trump administration has said it will veto a $3 trillion bill that Democrats proposed last week and has made clear that any additional legislation must include liability protection to insulate businesses against lawsuits from workers or customers who get sick.

In a sharp exchange during Tuesday’s hearing, Senator Sherrod Brown of Ohio, the top Democrat on the Banking Committee, accused Mr. Mnuchin of prioritizing the stock market over public health.

“How many workers should give their lives to increase our G.D.P. by a half percent?” Mr. Brown asked. “You’re pushing people back into the workplace.”

The Treasury secretary fired back, calling the characterization “unfair.”

Congress has already approved trillions in financial support to help businesses and workers, including $500 billion for the Treasury Department, which is using most of those funds to backstop Fed programs aimed at keeping credit flowing through the economy.

But with 20 million people already out of work and new infections continuing, there are growing concerns that the economy could need another financial boost to prevent businesses from failing and more workers from losing their jobs.

Mnuchin and Powell Address the Future of the U.S. Economy

“We have had to take unprecedented steps to shut down significant parts of our economy in the interest of public health. As a result in the second quarter of this year, we are continuing to see large unemployment and other negative indicators. It is important to realize that the large number represents real people. This is why it is so important to begin bringing people back to work in a safe way. We expect economic conditions to improve in the third and fourth quarter, and into next year.” “Some sectors of the economy have been effectively closed since mid-March. People have put their lives and livelihoods on hold, making enormous sacrifices to protect not just their own health and that of our loved ones, but also their neighbors and the broader community. While we are all affected, the burden has fallen most heavily on those least able to bear it. The sacrifices we’re all making represent an investment in our individual and collective health. As policymakers, we should continue to do what we can to help cushion the blow. This reversal of economic fortune has caused a level of pain that is hard to capture in words, as lives are upended amid great uncertainty about the future. The Reserve is committed to using our full range of tools to support the economy in this challenging time.” 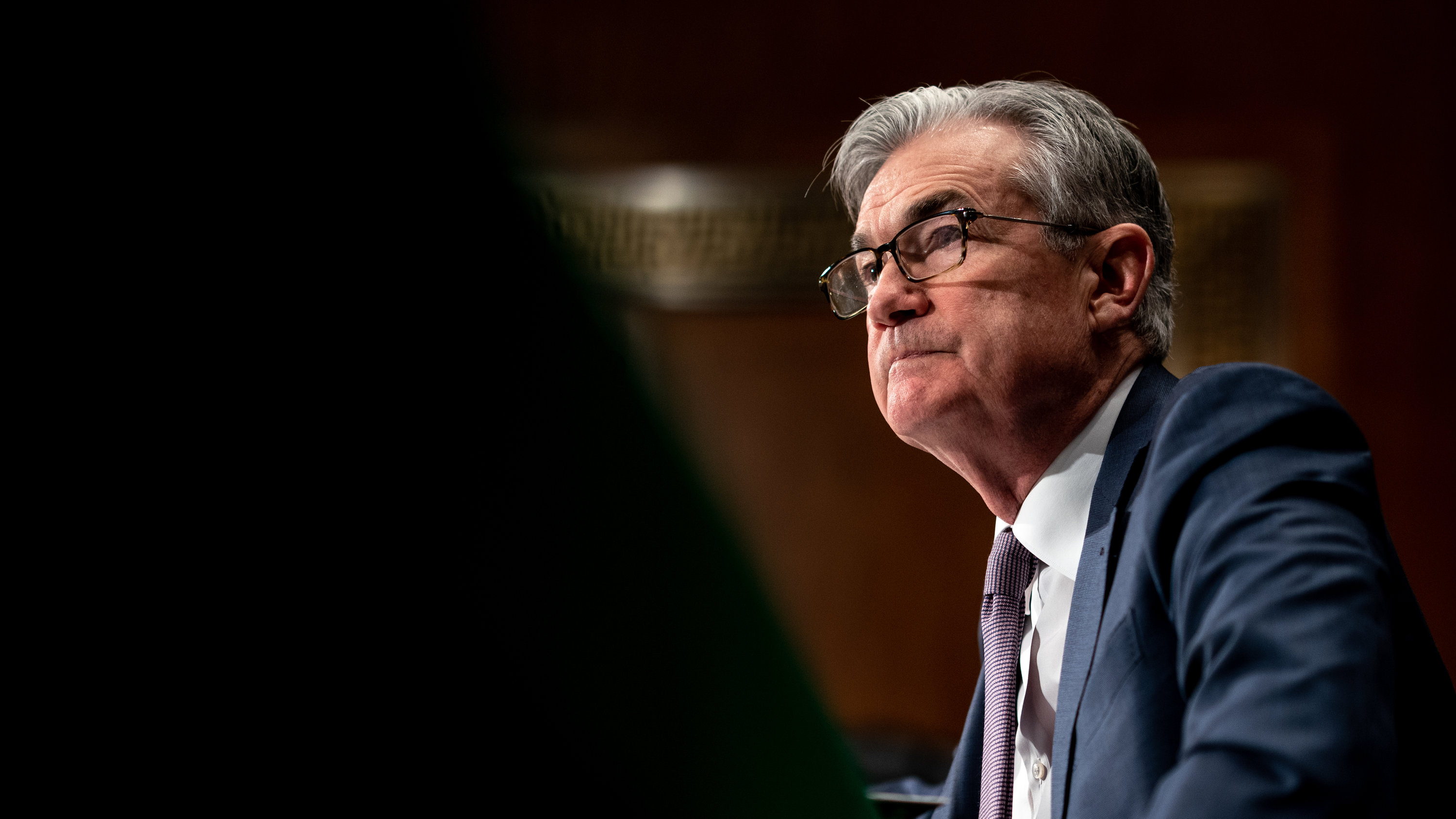 The nonpartisan Congressional Budget Office released new projections on Tuesday that illustrated the protracted downturn facing the United States and the uncertainty about how quickly it may recover.

The budget office predicts gross domestic product will contract by 11 percent in the second quarter and the jobless rate will hit 15 percent, with industries like travel, hospitality and retail bearing the brunt of the losses. The recovery is expected to be gradual, and by the end of next year, the C.B.O. expects the unemployment rate to be 8.6 percent.

The agency notes that the policy responses to the virus in the United States and around the world are evolving quickly and the prospects of a second wave of infections or a successful vaccine are difficult to predict.

“Output, employment, inflation, interest rates and many other macroeconomic variables will be greatly influenced by the course of the pandemic and the social distancing measures implemented to contain it,” the C.B.O. said. “The range of uncertainty about social distancing, as well as its effects on economic activity and implications for the economic recovery over the next two years, is especially large.”

Although they generally present a united front, Mr. Powell’s and Mr. Mnuchin’s views on the trajectory of the recovery have at times been at odds. Mr. Mnuchin has been more of an economic cheerleader, promoting the prospects of a “V”-shaped recovery, with growth and job creation returning during the second half of the year. He has taken a wait-and-see approach to more fiscal measures and has been reluctant to offer more support for states.

Mr. Powell has repeatedly suggested that a full economic recovery could take many months, even once states reopen, and he warned that state and local governments could slow the rebound if they lay off workers amid budget crunches.

“The No. 1 thing, of course, is people believing that it’s safe to go back to work, and that’s about having a sensible, thoughtful reopening of the economy, something we all want — and something that we’re in the early stages of now,” Mr. Powell said. “It will be a combination of getting the virus under control, development of therapeutics, development of a vaccine.”

The Fed is in the process of setting up a program that should help states, big cities and large counties issue debt to temporarily fund themselves by issuing bonds, but many states have rules that prevent them from taking on longer-term debt to fund their day-to-day services.

Fed officials generally try to steer clear of fiscal policy, leaving it to Congress and the White House. But Mr. Powell has repeatedly cautioned that the recovery could take longer, particularly in certain sectors that involve large group gatherings, like restaurants, sporting events and airplanes, suggesting that policymakers must be ready to do more.

“We have 20-some million people out of work; we want to do everything we can to create a world where they can go back to their jobs or find new jobs,” Mr. Powell said. “That’s something all of us as policymakers should be strongly focused on.”

Mr. Powell’s colleague, the president of the Federal Reserve Bank of Boston, Eric Rosengren, went a step further in a separate speech on Tuesday, saying that opening the economy was not a “panacea” and that lifting restrictions prematurely would carry risks, potentially leading to worse health outcomes and higher unemployment.

“We can try to mitigate what’s happening, but until we have public health solutions, we can’t have a fully-healed economy,” he said of the Fed’s response.

The Fed has been trying to put a floor under the economic collapse and accommodate a recovery by rolling out emergency lending programs, many of which are backed by Treasury Department funding and all of which are aimed at keeping credit flowing to households, businesses and financial markets. Mr. Powell testified at length about those efforts and said all of the Fed’s remaining programs would be up and running by the end of the month, give or take a few days.

Yet the Fed’s efforts — along with the Treasury Department’s programs — have been charged, and lawmakers have been increasingly critical of the design, scope and efficacy of the vehicles. Some lawmakers want the Fed and the Treasury to be more aggressive and take more risk, while others said the efforts would reward companies that did not deserve to be helped.

The Fed and the Treasury have faced criticism for being too timid in creating their programs, especially after Mr. Mnuchin told reporters in April that he did not expect to lose money on the emergency lending facility.

He seemed to change that position on Tuesday, saying that “our intention is that we expect to take some losses on these facilities.”

“That is our base-case scenario,” Mr. Mnuchin added.

Previously, he had said that in his scenario, the government would recover its money from the loans. While that distinction may seem semantic, it could have big practical implications. If the Treasury Department is comfortable losing money, it might be more willing to accept Fed facilities that are intended to extend credit to riskier counterparts, like more heavily indebted companies.

Many of the questions asked on Tuesday highlighted the political tightrope that Mr. Powell and Mr. Mnuchin are walking.

Although the $2 trillion CARES Act passed with bipartisan support in late March, Democratic lawmakers have seized on the Trump administration’s carrying out of the law to accuse Mr. Trump of corporate cronyism.

Senator Chris Van Hollen, Democrat of Maryland, pressed Mr. Powell about how having the central bank buy junk bonds helped people on Main Street. Mr. Powell said that the Fed was assisting only a narrow set of “fallen angels” that were healthy before the crisis through a credit facility. The Fed is also buying a limited amount of high-yield exchange traded funds, which trade like stocks but are backed by basket of corporate debt.

In another tense exchange with Mr. Mnuchin, Senator Elizabeth Warren, Democrat of Massachusetts, asked why the administration was not forcing companies that take government-supported loans to not to fire their employees. She also pressed him, to no avail, to hold executives criminally liable for misusing bailout funds.

“You’re boosting your Wall Street buddies and you are leaving the American people behind,” Ms. Warren said.