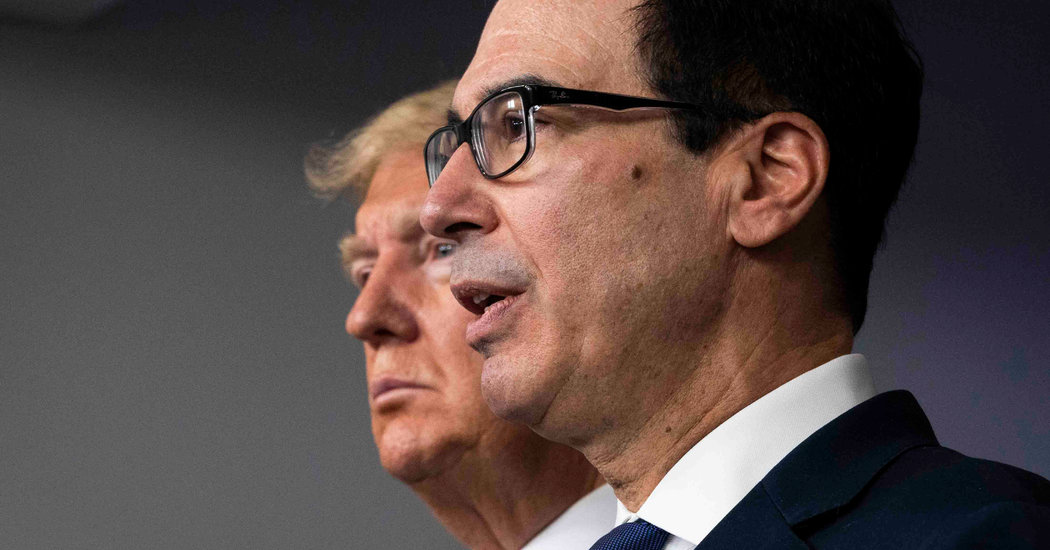 WASHINGTON — Treasury Secretary Steven Mnuchin said on Thursday that the White House wants to send $1,000 payments to every American adult and $500 per child within three weeks to prop up the United States economy as it has been rocked by the coronavirus pandemic.

The proposal is part of a $1 trillion economic stabilization plan to help weather a potentially deep recession prompted by the crisis, which would require congressional approval. Lawmakers were racing on Thursday to reach an agreement on the measure, which would constitute a third phase of a government rescue package whose cost has already soared into the hundreds of billions of dollars.

And Senator Mitch McConnell, Republican of Kentucky and the majority leader, suggested that the emerging measure could be followed by a fourth relief package as lawmakers grasp for ways to respond to an extraordinary situation.

“This is not Congress’s last chance to legislate, but it is critical that we move swiftly and boldly to begin to stabilize our economy, preserve Americans’ jobs, get money for workers and families and keep up our fight on the health front,” Mr. McConnell said on the Senate floor. “These are not ordinary policies. This is no ordinary time.”

Senate Republicans were hoping to have draft legislation ready as early as Thursday afternoon, after Mr. McConnell said on Wednesday that they were near a deal with the White House that would be the starting point for negotiations with Democrats.

Mr. Mnuchin said that if the crisis continues, the plan would be to send one round of checks in April, and another of the same amounts in May. It is not clear whether Americans of every income bracket would be eligible for the payments, or how they would be disbursed to people who do not have bank accounts. The Trump administration proposed this week sending a total of $500 billion directly to Americans in two tranches, and providing another $500 billion in loans and loan guarantees to businesses.

“What we’re really focused on is providing liquidity to American businesses and American workers,” Mr. Mnuchin said on the Fox Business Network on Thursday. “This is an unprecedented situation.”

Senate Republicans on Thursday drafted a plan that would send payments of $1,200 to individual taxpayers and $2,400 to families, with another $500 per child, according to two people familiar with the negotiations who insisted on anonymity to describe an emerging proposal. The direct payments, they said, would begin phasing out for those earning more than $75,000. Individuals who made more than $99,000 and families earning more than $198,000 would not be eligible. But the details were far from final as negotiations continued throughout the day.

And even after they finalize their proposal, the Republicans must still come to terms with Democrats to win its enactment.

While there is general agreement about the need to speed economic help to millions of Americans, House Democrats are debating how to target the direct payments and some of them are pushing for more government intervention. During a private conference call on Thursday, they debated where to set the income cap on individuals who could receive government checks, according to three people familiar with the discussion who insisted on anonymity to describe the private discussion. And some Democrats believe the government should intervene more directly and take on payroll or other expenses for small businesses, arguing that could be a more targeted and effective way to keep them afloat and people employed.

The fiscal relief package is only one part of the administration’s plan, which some analysts now anticipate topping $1.5 trillion before the negotiations are completed. Mr. Mnuchin said the Treasury Department and the Federal Reserve were working in lock step and were prepared to do whatever was possible to provide liquidity to American companies so they could weather the crisis without laying off workers. The Federal Reserve said late Wednesday night that it would offer emergency loans to money market mutual funds, its latest in a series of steps to keep the financial system functioning and prop up the economy.

The Treasury secretary also suggested that the government was open to taking equity stakes in companies to support them. He added that businesses that take advantage of emergency loans will be given loan forgiveness if they cannot pay them back.

“We’re looking at making secured loans on market terms,” Mr. Mnuchin said, referring to industries such as airlines. “We’ll see whether that includes equity or doesn’t include equity.”

He said he had advised the president to purchase oil, which is at historically low prices, and fill up America’s strategic reserve.

Economists are bracing for a deep recession. Analysts at J.P. Morgan said this week that the United States economy could contract by 14 percent in the second quarter of this year.

The Treasury Department has not released updated economic projections, but Mr. Mnuchin said that he expected the beginnings of growth again in the third quarter and a “gigantic” rebound in the final three months of the year.

At a White House news conference on Thursday, President Trump said the most important goal of the economic package being negotiated in Congress was to stave off job losses so the economy could rebound.

“When we do get rid of the virus, we are going to be able to just, really I think, go like a rocket,” Mr. Trump said. Despite that optimism, the president was clearly frustrated by the fallout, snapping at a reporter who noted that the economy was at a standstill and lamenting the speed of the downward trajectory.

“It’s too bad because we never had an economy as good as the economy we had just a few weeks ago,” he said.

Economic data is beginning to trickle out, offering a grim preview of the damage that lies ahead. Official figures released on Thursday showed claims for unemployment insurance reaching their highest level in more than two years.

“The coronavirus outbreak is already starting to have a significant impact on the economy,” said Andrew Hunter, a senior U.S. economist at Capital Economics. “Timelier reports of state-level data point to an unprecedented surge in layoffs over the next couple of weeks.”

The Treasury secretary indicated that he and the Federal Reserve chair, Jerome H. Powell, would use all the tools at their disposal to allow that workers and businesses to subsist for the next few months.

Mr. McConnell has tapped several Republican senators and their staff aides to hammer out the elements of what lawmakers have begun referring to as the “Phase 3” economic rescue plan. Earlier this month, Congress approved a first, $8.3 billion round of emergency money for federal health agencies, and this week it finalized a second measure — whose cost has yet to be tallied — to provide paid leave, jobless aid and food and health care assistance, as well as free coronavirus testing. Mr. Trump has signed both.

For the third rescue plan, senators are looking in part to previous stimulus packages for guidance, including the 2008 Wall Street bailout and the program created after the Sept. 11 attacks to help airlines. But this time, they are discussing adding far more restrictions and guardrails to ensure that employees reap the majority of the benefits and executives cannot increase their own compensation.

One proposal circulating among senators and aides is limiting the $1,000 payments proposed by the administration to individual taxpayers who earn less than $75,000 and families who earn less than a collective $150,000, according to two people familiar with the discussions, who insisted on anonymity to disclose details of private, unfinished negotiations.

Senator Marco Rubio of Florida, the Republican chairman of the Small Business and Entrepreneurship Committee, and Senator Susan Collins, Republican of Maine, unveiled a $300 billion proposal to provide grants to small businesses. Mr. Rubio said they had spoken with Democrats before publicizing their plans.

The proposal would provide cash-flow assistance structured as federally guaranteed loans to employers who pledge not to lay off their workers — potentially as much as the employer needs to stay in business for six weeks without layoffs. Those loans would be available during an emergency period ending June 30, and would be forgiven if the employer continued to pay their workers for the duration of the crisis.

The goal, Mr. Rubio wrote on Twitter on Thursday, was to “get cash to small business” as “fast & easy as possible so they don’t have to lay people off & if they use it for that purpose doesn’t have to be paid back.”

Mr. Mnuchin and other administration officials have been in constant communication with Senate Republicans. He has also spoken frequently with both Speaker Nancy Pelosi of California and Senator Chuck Schumer of New York, the minority leader.

Both Democratic leaders have said they want to see an expansion of paid-leave provisions in the upcoming package, which were narrowed significantly in the legislation Mr. Trump signed into law Wednesday after Republicans balked at the scope of the Democratic language.

“As we proceed with further legislation, we all see this tragic pandemic as a challenge for us to shape an economy that puts families first,” Ms. Pelosi wrote in a letter to her caucus, adding that committee leaders were discussing the possibility of expanding unemployment insurance eligibility, refundable tax credits and funds for small businesses to ensure that workers continue to be paid.

Time is of the essence in the talks. The news Wednesday night that two House lawmakers had tested positive for coronavirus after voting early Saturday has added pressure for senators to cut a swift deal on the package and depart Washington indefinitely.

The House, which left for a scheduled recess Saturday after the vote, has not set a date to return to the Capitol, and a number of lawmakers have announced their intent to self-quarantine after coming into contact with Representatives Mario Diaz-Balart, Republican of Florida, and Ben McAdams, Democrat of Utah, the two who tested positive.

Ms. Pelosi is expected to hold a call with her caucus Thursday afternoon to discuss proposals for the stimulus package, as well as concerns from some lawmakers about the need to establish a system for remote voting — an idea that both Ms. Pelosi and Mr. McConnell have so far dismissed.