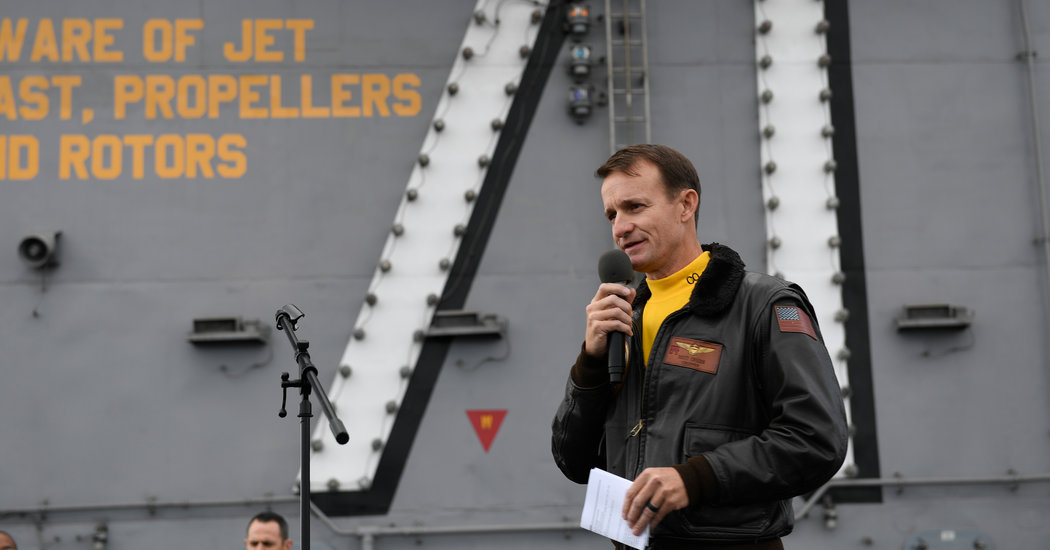 WASHINGTON — A Navy investigation has concluded that the two top officers aboard the aircraft carrier Theodore Roosevelt made poor decisions in response to the outbreak of the coronavirus onboard the warship, according to a congressional aide.

As a result, Capt. Brett E. Crozier will not be restored to command of the virus-stricken ship, and his boss onboard, Rear. Adm. Stuart P. Baker, will have his promotion to two-star admiral put on hold, the aide said.

There will be no other punitive action taken against Captain Crozier.

The conclusions of the investigation are expected to be announced by Navy Secretary Kenneth Braithwaite and Adm. Michael M. Gilday, the chief of naval operations, at a Pentagon news conference on Friday afternoon.

The decisions mark a reversal for Admiral Gilday, who previously had recommended to his Pentagon superiors that command of the Roosevelt be returned to Captain Crozier, who was relieved in April after he pleaded for more help fighting the coronavirus outbreak aboard his ship.

The events surrounding Captain Crozier, who has been viewed as a hero by his crew for putting their lives above his career, had seized the attention of the Navy, the military and even a nation struggling with the coronavirus.

The three-month saga of the Theodore Roosevelt also offers a window into how the military has tried to adjust to the wishes of an unpredictable commander-in-chief. Captain Crozier was fired in part because of fears that President Trump wanted him gone, and not knowing how the president feels about reinstating the captain has cast a shadow over the Navy’s actions ever since.

In an ill-advised attempt to control a quickly deteriorating public affairs disaster after the firing of Captain Crozier, Thomas B. Modly, the acting Navy secretary at the time, flew 8,000 miles to Guam.

Onboard the Roosevelt, he delivered a 15-minute tirade at the crew that, once it leaked, infuriated members of Congress, military families and even senior Defense Department civilians and military officers. Mr. Modly was forced to resign.

After a weekslong quarantine in Guam, the Roosevelt resumed operations in the Philippine Sea this month. The 4,600 crew members — minus 200 sailors who stayed behind to recover from the coronavirus and were eventually flown to the United States — assumed they would be home sometime in July, the scheduled end of their six-month-long deployment.

But just days before their departure from the island, sailors were told their deployment had been extended.

For how long remains unclear — although one crew member said that it most likely had to do with the Navy’s desire to simultaneously deploy three nuclear-powered carriers in the Western Pacific for a symbolic show of American might and a photo op.

This sentiment was echoed in an announcement to the crew by the interim skipper, Capt. Carlos Sardiello, just before the ship departed from Guam. Broadcast from the ship’s loudspeakers, Captain Sardiello called the Roosevelt a “symbol” to the free world, and its triumph over the novel coronavirus a monumental feat.

But the Roosevelt is still fighting to change its luck.

Two F/A-18F Super Hornet aviators were forced to eject while conducting routine flight operations on the Philippine Sea on Thursday, the Navy said in a statement. Both aviators were quickly rescued and are in good condition, but the attack plane was lost to the depths. An investigation is underway.