NBC News host Chuck Todd asked Democratic presidential candidate Joe Biden if President Donald Trump has “blood” on his hands due to his management of the coronavirus pandemic.

Todd posed the question to Biden during his Sunday show Meet the Press, as they discussed the coronavirus and the president’s response. The journalist noted that the former vice president’s presidential campaign had previously warned that Trump could “cost lives” if he didn’t take specific steps to address the crisis.

Biden responded saying: “I think that’s a little too harsh.”

TODAY on #MTP: Former VP @JoeBiden says Trump should “listen to the health experts … the economists.”

Biden: “He should be focusing on making sure we are in a situation where we are able to see to it that unemployment benefits can get to people.” pic.twitter.com/5q2cWzUKFD

Some conservatives were quick to criticize Todd’s question, arguing that the question was “absurd” and “infuriating.”

“You know a question is absolutely absurd when someone running for president has to say ‘you know what, slow down there,'” Ben Williamson, chief of staff and communications director for GOP Representative Mark Meadows, posted.

You know a question is absolutely absurd when someone running for president has to say â€œyou know what, slow down thereâ€ https://t.co/zitUHcRgQw

Chuck Todd: “Do you think there is blood on the President’s hands?”

Joe Biden: “I think that’s a little too harsh.”

When Chuck Todd’s attacks on @realDonaldTrump are too much for even Biden, you got a problem. pic.twitter.com/nzm82f8Ghf

Todd has drawn criticism previously. In February, the hashtag #FireChuckTodd trended after the NBC host read an excerpt from an article that compared Democratic presidential candidate Senator Bernie Sanders’ supporters to the Nazi party’s paramilitary fighters. Many found the comparison particularly offensive as Sanders’ is Jewish, and had family members killed in the Holocaust.

But Democratic Speaker of the House Nancy Pelosi also suggested on Sunday that Trump’s management of the pandemic had led to unnecessary deaths.

In a statement emailed to Newsweek, White House Deputy Press Secretary Hogan Gidley criticized Pelosi’s remark. “America is coming together in the face of this crisis like never before, and it’s disgraceful that instead of praising the American spirit, Speaker Pelosi seeks to stoke hatred and fear for political gain,” he said. 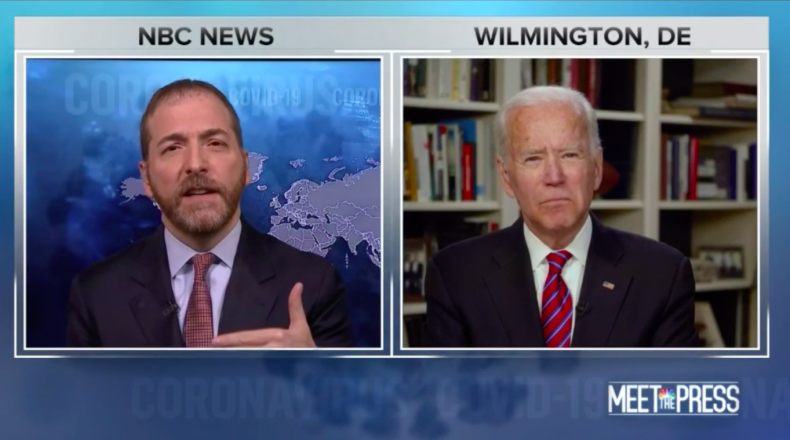 The U.S. now has far more confirmed cases of coronavirus than any other country in the world. At the time of writing, there are more than 135,000 confirmed cases of the novel virus in the U.S., according to a tracker updated by John Hopkins University. More than 2,300 have died nationwide, while over 2,600 have recovered.

Trump took early precautionary action to prevent the spread of the virus by blocking foreign travelers who had recently visited China from entering the U.S. However, the government was then slow to roll out widespread testing, making it difficult to track the coronavirus’ spread and to isolate those infected. The president also repeatedly called the concern raised by lawmakers and health experts a “new hoax” by the Democrats, while downplaying the threat of the virus by comparing it to the common flu, which is believed to be at least 10 times less deadly.

Dr. Anthony Fauci, who is on Trump’s coronavirus taskforce and serves as the director of the National Institute of Allergy and Infectious Diseases, presented a dire assessment of how the virus will spread moving forward.

“We’re going to have millions of cases,” Fauci warned. The health expert projected that the country could see some 100,000 to 200,000 deaths based on the data he has reviewed.