A total of 19 polls of voters in swing states from four different pollsters were released Thursday, with former Vice President Joe Biden leading President Trump in every single one, including in historically Republican states like Arizona, Georgia and Texas. 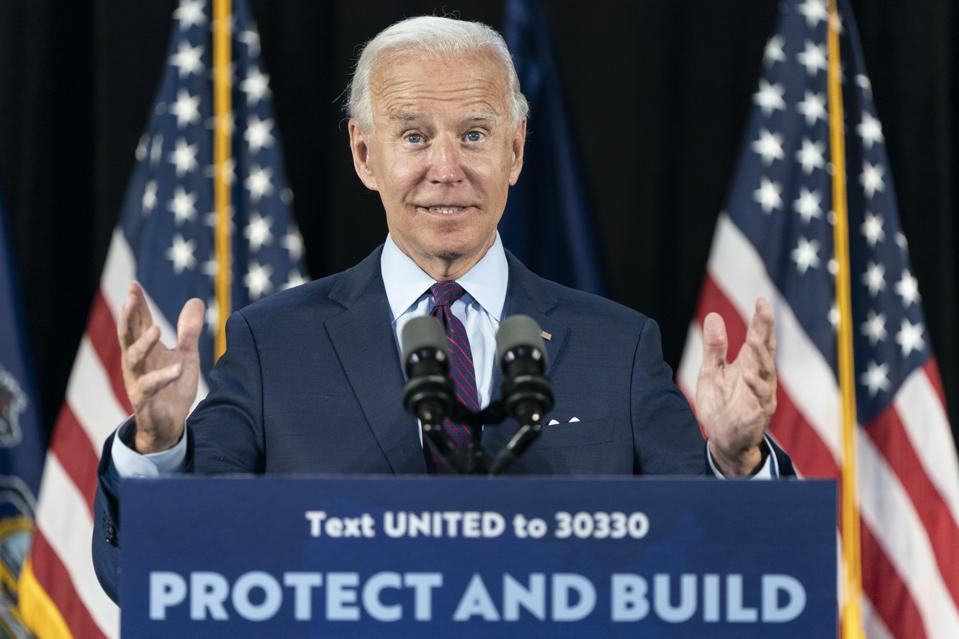 LANCASTER, PA – JUNE 25: Democratic presidential candidate former Vice President Joe Biden speaks at … [+] an an event about affordable healthcare at the Lancaster Recreation Center on June 25, 2020 in Lancaster, Pennsylvania. Biden met with families who have benefited from the Affordable Care Act and made remarks on his plan for affordable healthcare. (Photo by Joshua Roberts/Getty Images)

Biden leads by as much as 18 points in Michigan in a poll from Republican firm Hodas & Associates, which also put him up 16 points in Wisconsin and 12 points in Pennsylvania.

Polls released by the New York Times and Siena College put Biden up by double digits in those states, with 11-point leads in Michigan and Wisconsin and a 10-point lead in Pennsylvania, as well as a 9-point lead in North Carolina, an 8-point lead in Florida and a 7-point lead in Arizona, all states that voted for Trump in 2016.

Redfield & Wilton polls showed almost identical results, with Biden leading by 11 points in Michigan, 10 points in Pennsylvania, 9 points in Wisconsin, 6 points in North Carolina and 4 points in Arizona and Wisconsin, with third-party candidates Jo Jorgensen and Howie Hawkins never polling above the margin of error.

But polls of typically Republican-leaning swing states from Fox News yielded the most shocking results, with Biden ahead by 9 points in Florida, 2 points in North Carolina and Georgia and 1 point in Texas, which voted for Trump by 8 points in 2016.

Trump has struggled to respond to several major crises that have hit the U.S. in recent months. While he initially received a bump during the early stages of the coronavirus pandemic in April and May, that quickly evaporated by June as protests swept the nation in response to the death of George Floyd. Trump’s approval rating in the RealClearPolitics average is underwater by 13 points, his lowest margin since the beginning of the Ukraine scandal, which led to his eventual impeachment.

37%. Just 37% of Americans approve of how Trump has handled the coronavirus pandemic compared to 58% who disapprove, according to a new Reuters poll.

Biden’s wide lead in critical battleground states, and the competitiveness of historically Republican states, forces Trump to change up his strategy, which once included going after Democratic-leaning states like Minnesota and New Mexico. His campaign has spent significant time in Arizona, with Trump and Vice President Mike Pence both making recent visits. While Arizona has long been safely in Republican hands, it voted for Trump by just 4 points in 2016 and elected Democrat Kirsten Sinema to the U.S. Senate in 2018.