As of yesterday, Netflix has rolled out a new feature that it had only been testing in a select few regions before this. That would be a new “Top 10” classification for its originals or licensed shows that is starting to appear on a lot more accounts.

Netflix published a full-on blog post about the new feature and why they debuted it:

“Whether you love books, music, films or TV, top 10 lists are a great way to find out what’s popular. So today we’re rolling out a new Top 10 feature on Netflix. This new row – complete with its own special design – will enable you to see what is most popular on Netflix in your country.”

It seems like this is simultaneously a way for Netflix to plug its own originals even further (although we do see outside shows making the list like Better Call Saul) and also to get people out of perhaps an algorithm feedback loop where they’re just recommended a constant stream of adjacent titles to what they’ve already watched. This way, Netflix can say “here are the ten most popular shows/movies in your region today” and potentially get you to watch something that you might not have considered otherwise. You can also do just top 10 shows or top 10 movies if you click on the individual tabs for those.

But how this is playing out in practice is kind of weird, at least on my own account.

Netflix says that the Top 10 row will “be updated every day and the position of the row will vary depending on how relevant the shows and films are to you.” 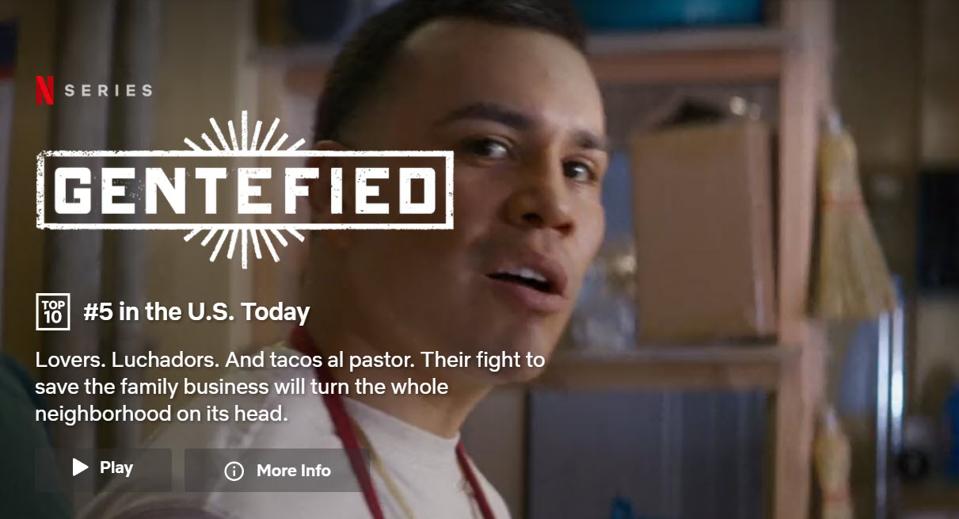 But in my case, I do not have the Top 10 row at all on my account. I do have several shows branded with the Top 10 badge that are showing up in various places in my other rows. And certain programs are telling me what number they are on the list like Gentefied (#5 in the US today) or the Anne Hathaway/Ben Affleck Netflix original move, The Last Thing He Wanted (#2 in the US today). The lack of the actual top 10 list however is present across both my wife and I’s accounts, and across TV, browser or iPad. So I guess it’s not “relevant” enough to us for a feature? Unclear.

I think it’s a good concept for Netflix users because frankly, Netflix has not been terribly user-friendly for a while now. They only recently disabled autoplaying trailers and episodes (or at least the ability to disable them), and two consistent problems with Netflix are that they A) do not have ratings like traditional TV, so it’s hard to know what’s actually popular on the service other than the “trending now” page and general social media chatter and B) they do not have user or critic ratings in the app, and you have to go outside of it to find what people actually think of the content. The % match system is a total joke.

The Top 10 list doesn’t really solve these problems, per se, but it’s certainly better than nothing. I am curious to see how much it changes day to day and how I can actually get the full list to show up in my feed, as I can only see the Top 10 badges for now. You can’t even search for “Top 10” on the app and have it return any results, which seems like an oversight. But it’s early days, I suppose, so we’ll see how this concept evolves in time.