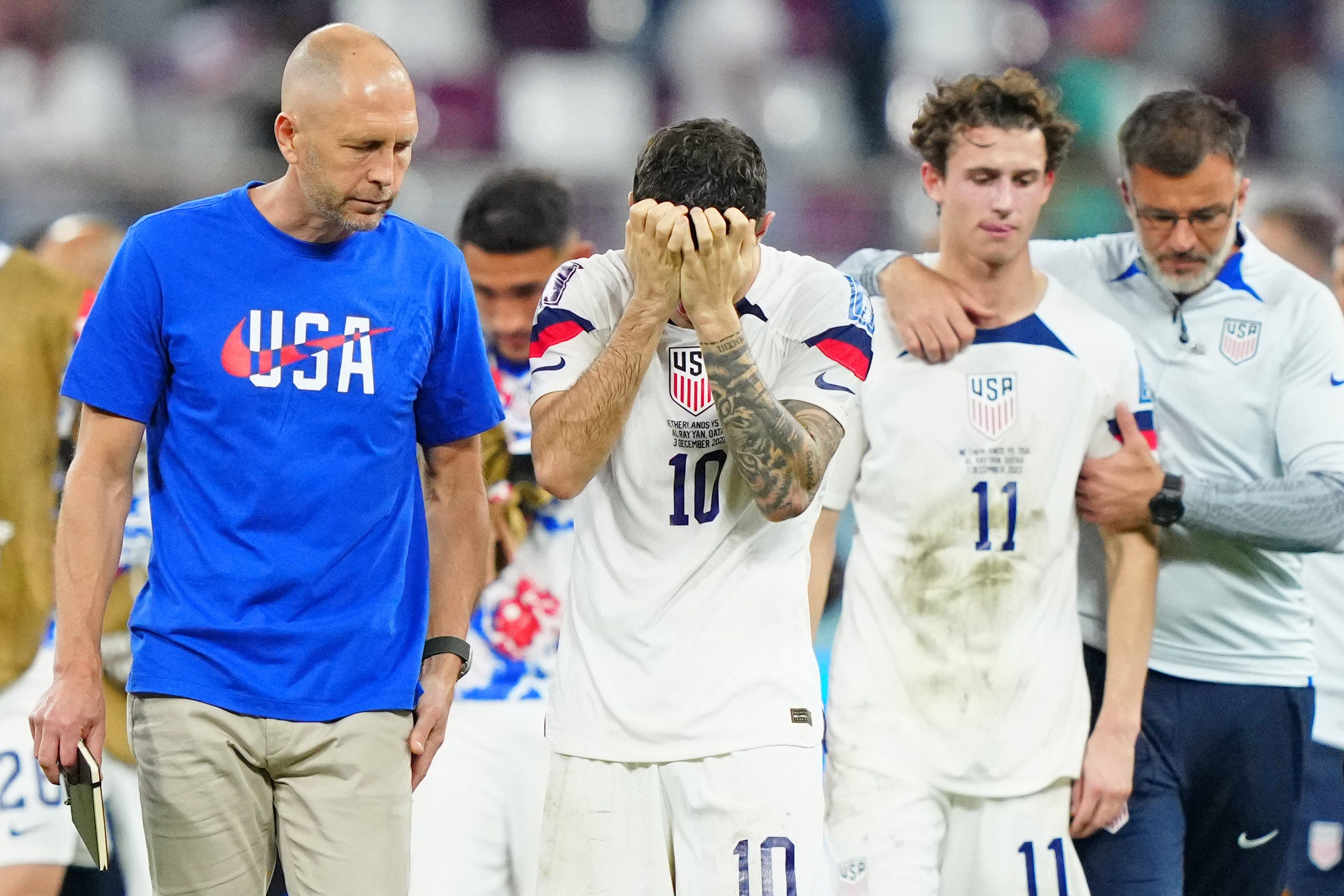 A 3-1 loss to the Netherlands on Saturday eliminated the Americans in the round of 16, the same finish as the 2014, 2010 and 1994 squads. The USMNT has won just one knockout round game since returning to the World Cup in 1990 after a 40-year absence, when the 2002 team reached the quarterfinals.

The loss will be a disappointment for the Americans, who were certain their talent and team chemistry could overcome their lack of experience on the world stage. They talked of winning the World Cup, part of a larger mission to change the way the world sees American soccer.

But it’s clear the USMNT has a ways to go to be considered among the world’s elite after being outplayed by the Dutch.

The Americans were down 2-0 at the half, the goals by Memphis Depay and Daley Blind both coming off defensive breakdowns. They managed to pull a goal back in the 76th when Christian Pulisic’s corner kick got recycled and his cross hit Haji Wright on the back of the leg. The ball ran up Wright’s leg and took a wild bounce into the net to cut the Netherlands’ lead to 2-1.

But the USMNT got caught napping again in the 81st minute when Denzel Dumfries was left unmarked at the back post. Dumfries saw the opportunity, waving his hand to call for the ball, and Blind found him with a cross that Dumfries put into the far corner.

The Dutch players on the bench rushed onto the field, knowing the game was effectively over. The Dutch fans were singing, “Na na na na, hey hey, goodbye,” in stoppage time.

It might have been a very different game had Pulisic, starting four days after being subbed off at halftime with a pelvic injury, not missed a gimme in the third minute. Pulisic might have thought he was offside because his shot was off, and Andries Noppert was able to clear it with a kick save.

But the Dutch took the lead seven minutes later when Tyler Adams and Sergino Dest lost track of Depay after he sprayed the ball wide to Dumfries. That allowed Depay to run unmarked into the penalty box and beat Matt Turner with a rocket of a shot, and the USMNT was left to play catchup – unsuccessfully – the rest of the way.

Despite the ugly loss, the USMNT has plenty of positives to take away from this World Cup.

The USMNT was completely rebuilt after the failure to qualify for the 2018 World Cup. Though it is a young squad – even with Ream, 35, and Sean Johnson, 33, the USMNT’s average age was 25 years and 216 days – it is colossally talented individually, arguably the best the United States has ever had.

Collectively, they have established an identity that goes beyond American grit. Pulisic is dangerous whenever he’s on the field, the kind of offensive threat opponents have to constantly guard against. Defensively, the USMNT was quick to close down space, offering opponents few opportunities.

The USMNT was one of just five teams to reach the knockout rounds without a loss, and they held mighty England scoreless. Depay’s goal was their first conceded in the run of play.

“They’ve evolved well,” Dutch coach Louis van Gaal said before the game. “It’s a process and perhaps the USA hadn’t expected that from this squad. I think if you watch them play, it’s crystal clear they had opportunities, and that’s what they’ve shown us.”

Given van Gaal’s résumé – in addition to the Netherlands, he’s coached at Ajax, Barcelona and Manchester United – that’s high praise.

And for everything the USMNT said here about winning, their best chance was always more likely to be in four years, when the United States co-hosts the World Cup with Canada and Mexico. Pulisic, Adams, Weston McKennie and Dest will be in the primes of their careers with Yunus Musah, Gio Reyna and Brenden Aaronson approaching theirs.

It is already a charismatic group that charmed the American public. If the USMNT can keep developing talent, shore up the center back position and identify a true striker, talk of contending in 2026 could be more than just American exuberance.