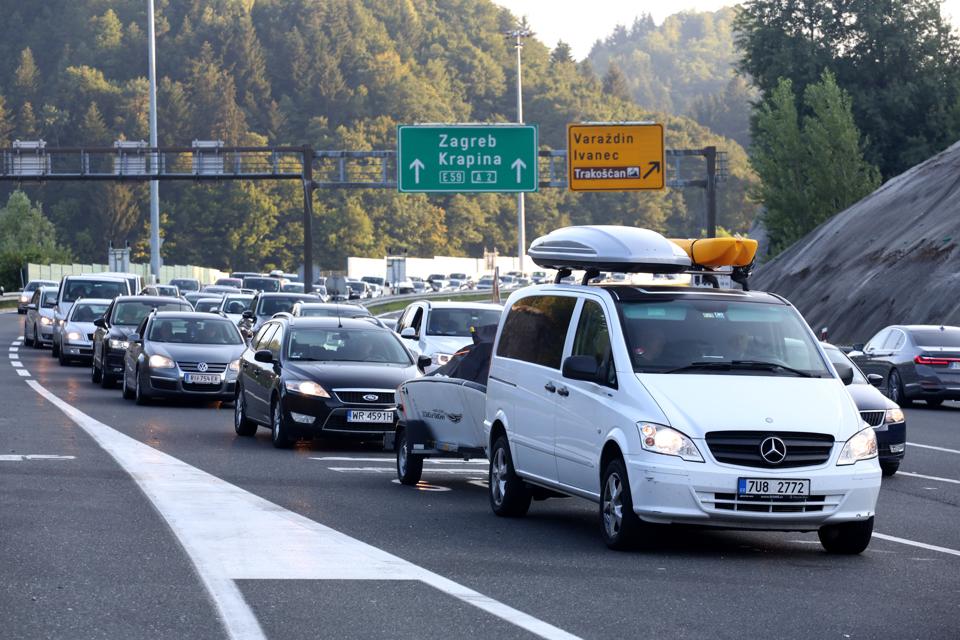 Tourist vehicles from Austria, Slovenia and Germany, queue at the border crossing between Croatia … [+] and Slovenia, after new Covid travel warnings and quarantines for Croatia.

As Covid creeps up again across Europe, many countries are reimposing travel restrictions on neighbours.

As this happens, the map of Europe is being color-coded red, green and yellow.

Travelers on high-risk red lists are being shut out, either with total travel bans or quarantines. Those on green lists meantime have a green light to travel.

But n a sign of the times, Norway for example no longer ranks any zones as green in Europe or beyond. 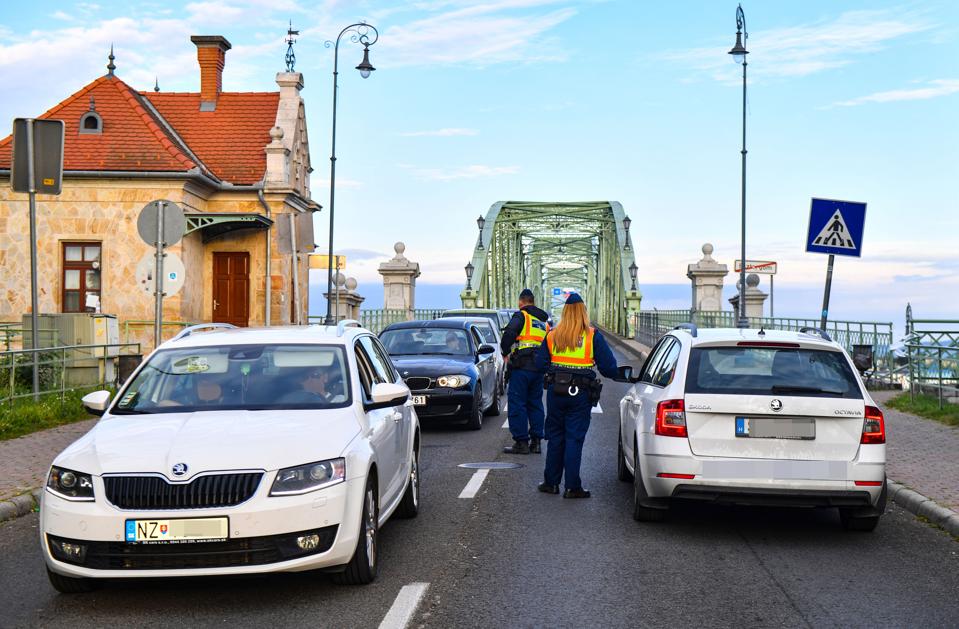 Police officers control car drivers at the Hungarian-Slovakian border on September 3, after Hungary … [+] closed its borders to nearly all foreigners. The EU slammed the decision as discriminatory, and says it will soon put forward a bloc-wide approach to new travel restrictions amid the coronavirus resurgence.

The most spectacular and controversial return to shutdown EU borders came with Hungary’s decision to add all countries to its red list from September 1.

Barely two months after reopening to Schengen travelers, it’s defying the bloc’s recommendations on internal borders and travel freedoms. The measures will stay in place at least until October 1.

Links to government restrictions are included in the country headings. See useful details on the Reopen Europe website too. 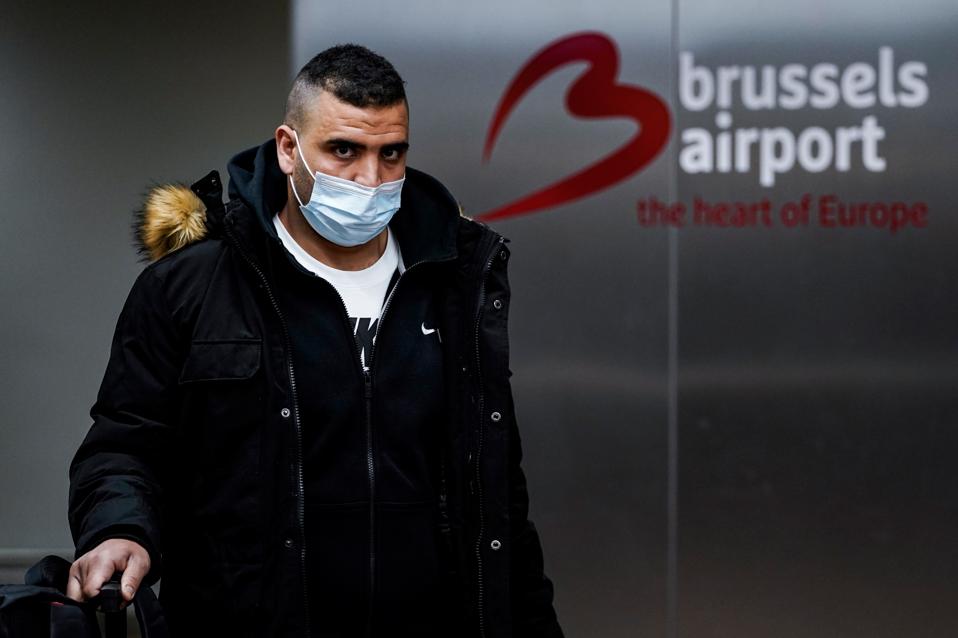 “Travelling within Europe: pay attention to the colour code of your destination,” urges the Belgium … [+] government. That picture is being repeated all over the usually passport-free Schengen zone, as Covid-sparked controls make a comeback. It’s a constant seesaw act. France for example was briefly removed from Belgium’s red list, but is now back on it. And the number of cities and regions in France and elsewhere is growing. Of those countries who use such a color system, each varies wildly, based on relative corona epidemiology.

Belgium in early August added many parts of Romania, France and Spain to its red list. That means a total ban on non-essential travel to those places. Travelers returning must both quarantine and test on return. 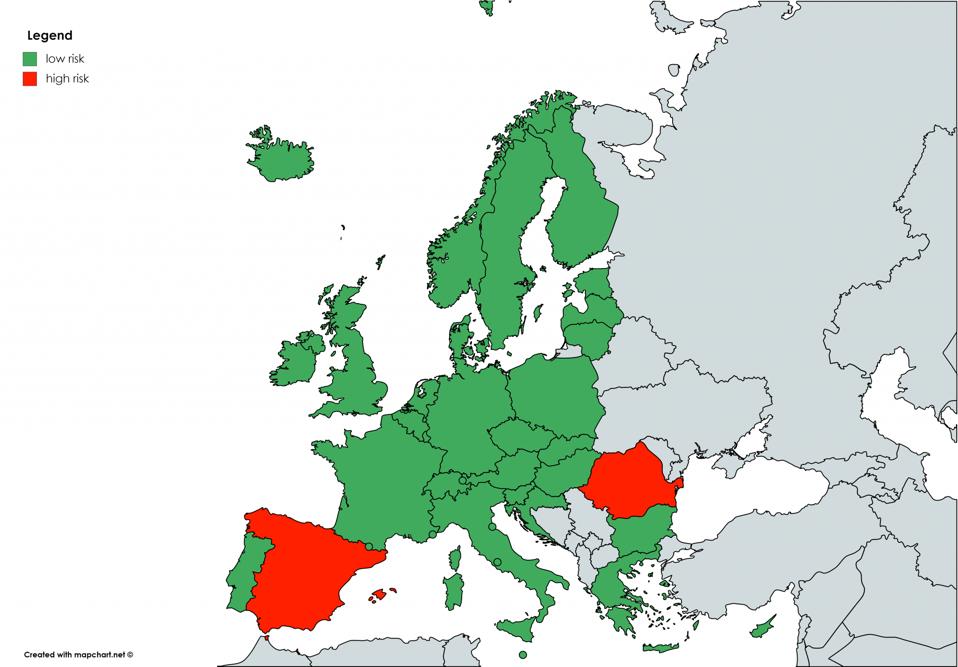 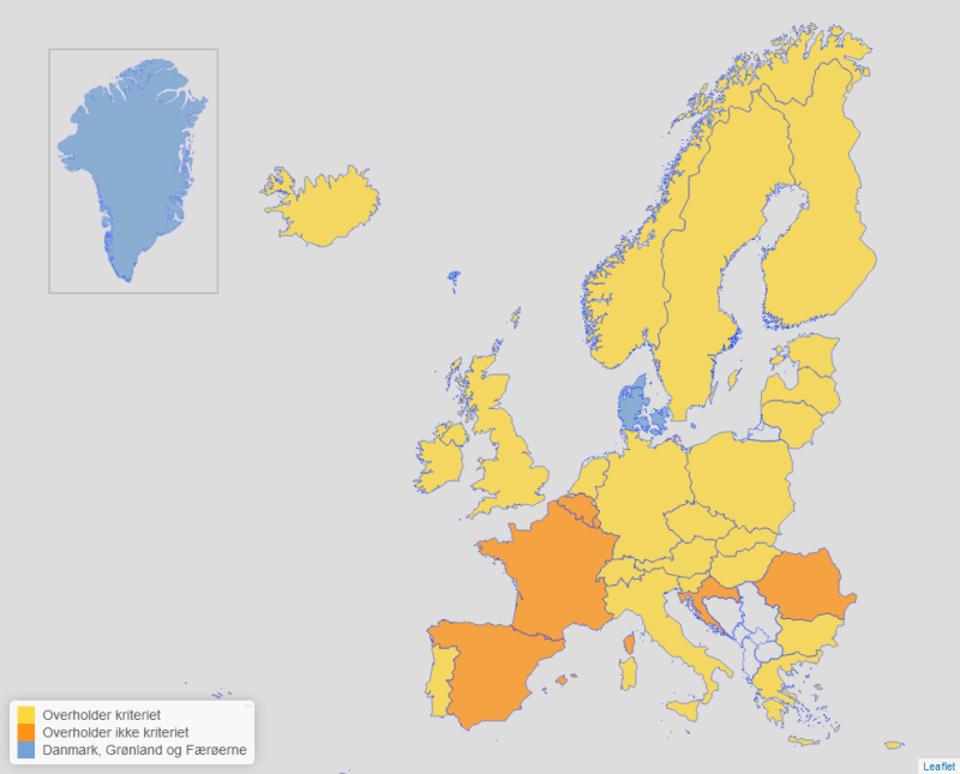 The Danish government’s health map of the EU, Schengen zone and the U.K. indicates “open” and … [+] “closed” countries for travel to and from Denmark. Spain, Belgium, Luxembourg and Croatia are among the European banned countries in orange. 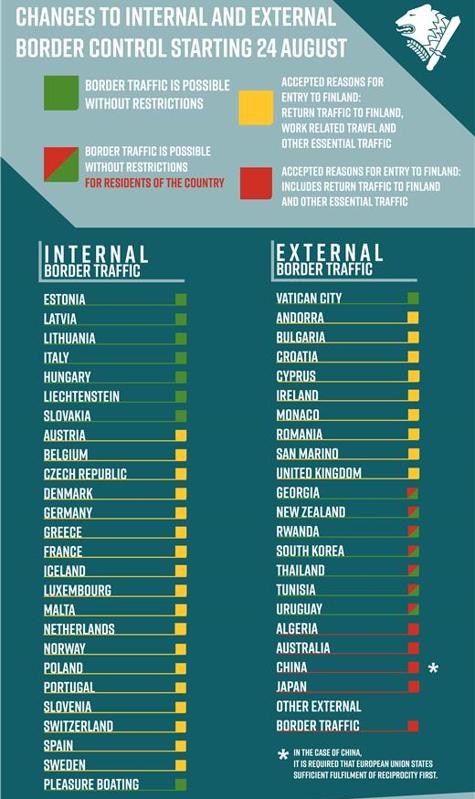 Residents from mixed red-green countries face no travel restrictions either to Finland. They include … [+] some though not all of the EU’s safe country list. Australia, China and Japan are red.

Finland too has a red, green, yellow system, updated on August 24. 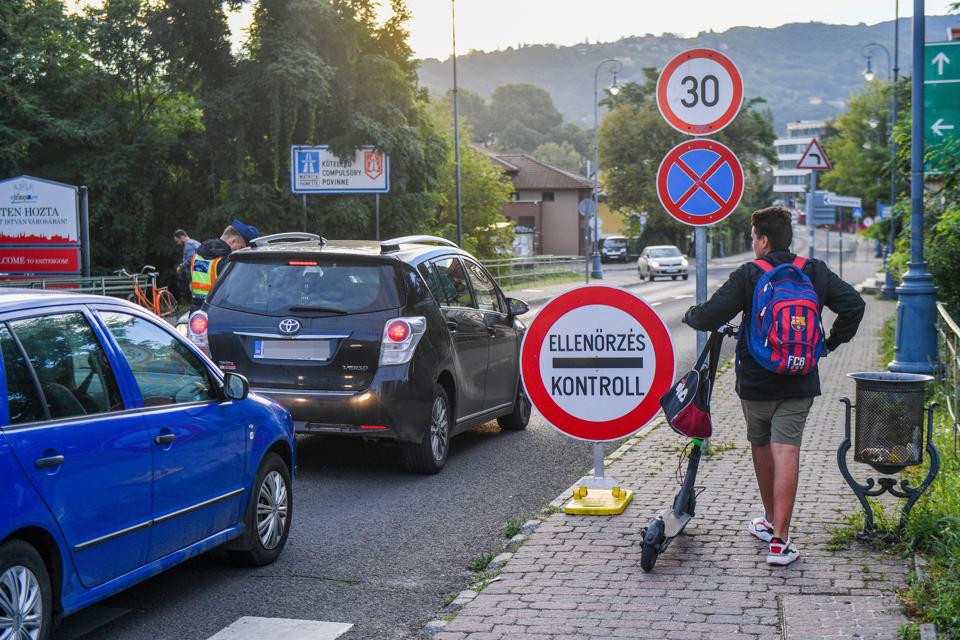 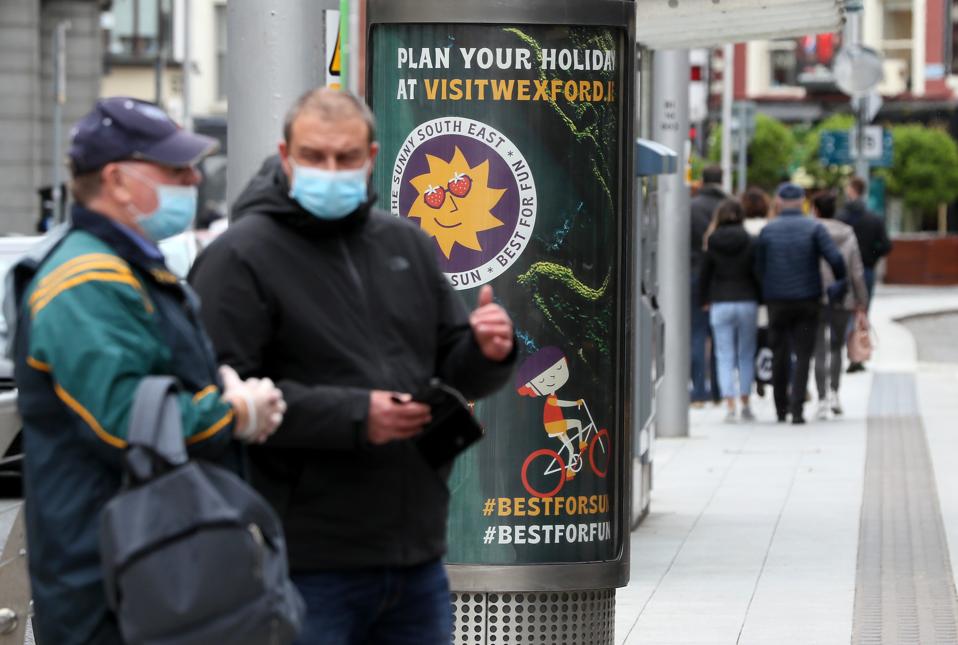 Ireland has a Green List for travel, and a not green list, which it doesn’t officially call a red … [+] list. But amounts to that. Meantime Irish people are still being advised to holiday at home. 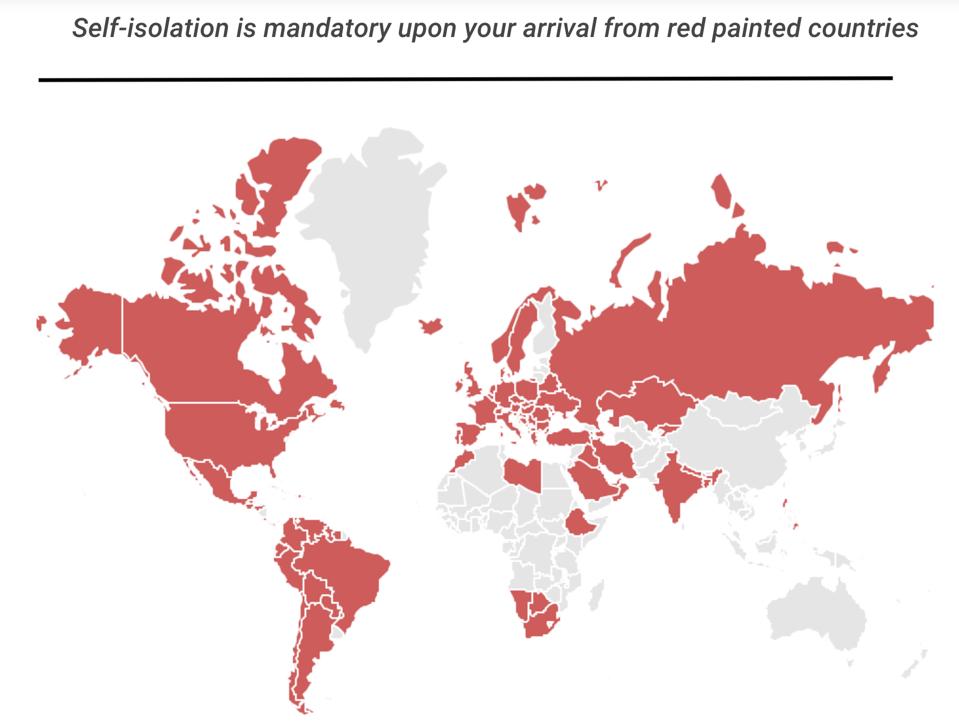 A map of “red painted” countries shows on Lithuania’s KORONA STOP government website shows how the … [+] new corona travel restrictions in Europe and beyond are spreading. 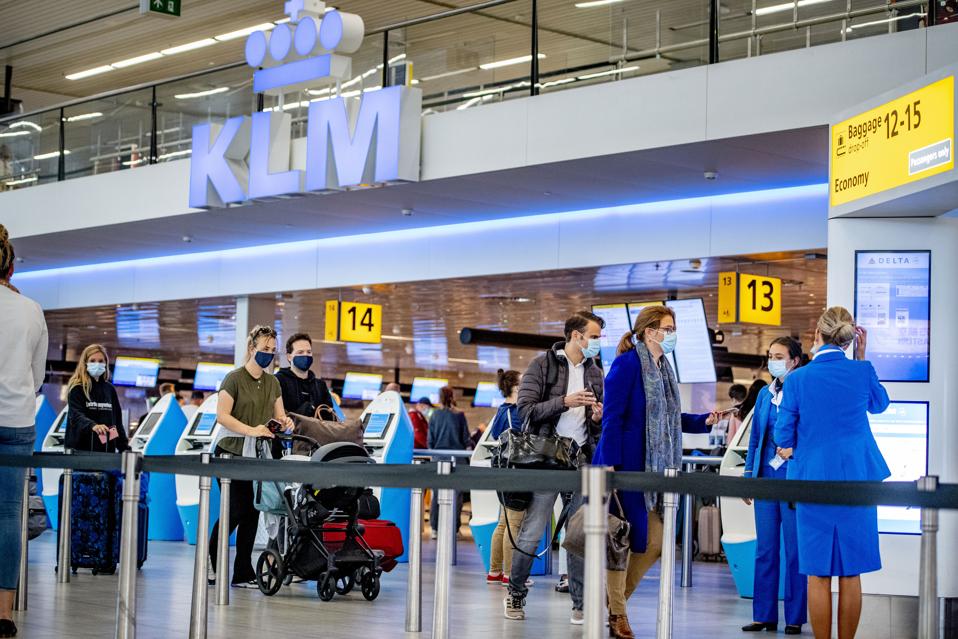 Given red and green lists are based on relative Covid risk levels, countries rated Yellow for travel … [+] in the Netherlands may indeed be classed as Red by other EU members. The Dutch themselves, due to high infection levels, are banned by a growing number of Europeans. Estonia, Finland, Iceland, Latvia, Lithuania, Norway, Cyprus, Hungary, Slovenia, Slovakia and the U.K. are among those who have red listed the Netherlands.

The Dutch government zones countries for Covid as Yellow (OK) and Orange (not ok, quarantine required). “Foreign travellers from countries where the health risks are similar to or lower than in the Netherlands can enter for tourism,” it says. The Norwegian Institute Of Public Health map shows there are no longer any green, totally safe Covid … [+] countries in Europe. Only red – meaning mandatory quarantine – and yellow, no quarantine but nonetheless classed as “increased risk” for Norwegians. The striped areas the government says are generally not evaluated, but quarantine is required.

Norway has a red, green, yellow Covid map. Currently no country is marked as a restriction-free green zone. Many more Europeans were added to the “high transmission” risk red list on August 29. 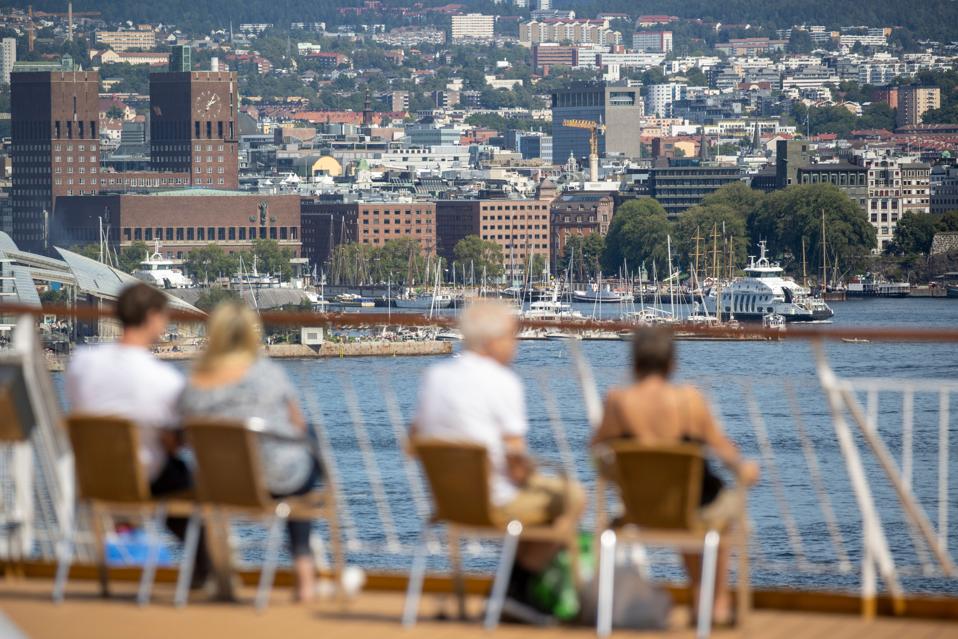 With Norway adding nearly all EU and Schengen countries to its red list – some 20 in all – … [+] Norwegians are also advised to not travel abroad. They have been holidaying at home for months.

Slovenia too has a color-coded system with green, yellow and red lists. 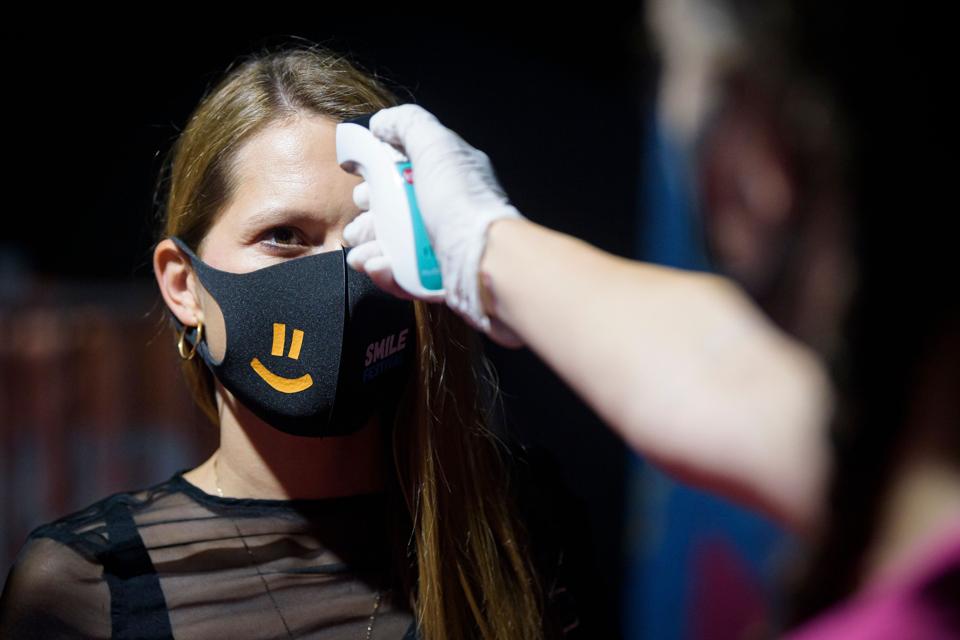 The U.K. red list comes in the form of quarantine for a growing number of countries. The Czech Republic and Switzerland are among the latest Europeans to join others like France, Croatia and Austria who no longer enjoy a quarantine-free travel corridor with England.

Showing the nation’s quarantine policy disarray, Scotland and Wales are imposing quarantine on Greece and Portugal–both of which remain on England and Ireland’s corridor lists. 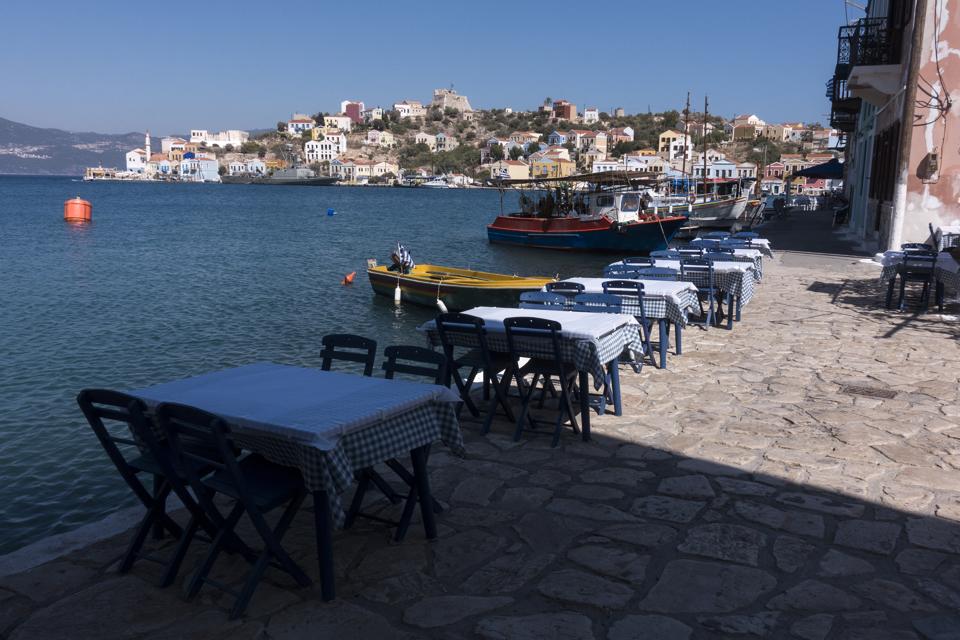 The empty tables on Meis Island in Greece say it all about the new wave of Covid travel bans and … [+] restrictions. Will England soon quarantine Greek arrivals? Scotland and Wales are already doing so.