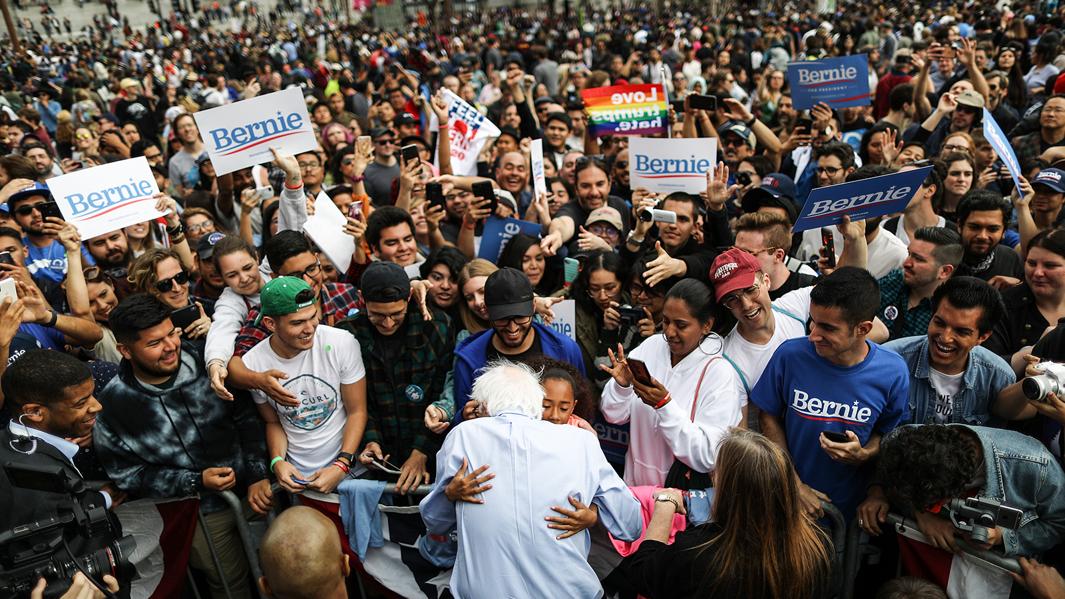 Bernie Sanders is expanding his lead in the 2020 primary field among young Democrats, according to the latest Forbes Under 30 Voter Survey, which surveyed more than 1,000 likely voters ages 18 to 29 after Saturday’s Nevada caucus and before Tuesday’s South Carolina debate. Sanders is the top choice of 38%, up from 32% a month ago—despite renewed attention on his perplexing affinity for 1980s communist regimes, Soviet infrastructure and a term that helped repress and impoverish tens of millions of people during the Cold War. Sanders’ unabashed embrace of “democratic socialism” affixes a giant anchor around his ankles in a general election, and even as the primary race expands. But the numbers also reinforce a significant shift among younger Millennials and an emergent Gen Z—now a majority view among Democrats in this demographic—that Sanders has fueled and harnessed: comfort with the term “socialism,” as well as healthy skepticism about modern capitalism.

Likely voters under 30 actually have a net positive perception of socialism, by 43% to 39%, according to our poll, done in conjunction with John Zogby Strategies—the largest-ever ongoing survey project focused on young voters. That’s not as strong as their positive perceptions of capitalism, 50% to 33%. But not that far behind. And check this out:

Yup, three in five young American voters would either prefer a mainly socialist economic system for America—or aren’t sure.

Breaking down those numbers by political party, the findings are still more stark, helping to explain the youth-driven Sanders primary firewall, the reason all the Castro-coddling and the like doesn’t dent his floor.

First, note that even in the party of Reagan, the traditional home of free market sacrosanctity, more than a quarter of under-30 voters are inclined to like socialism. (And only 55% of Republicans view capitalism favorably.)

Among independents, socialism even scores a plurality.

And among Democrats under 30, our survey found that socialism favorability is now the majority view. So let his primary competitors tar him as a socialist, or at least warn of that label’s toxicity among the general electorate—to the Bernie base, it’s a compliment.

A compliment, in fact, that’s far safer among the young core than being called a capitalist. See below. And these numbers seem poised to increase in the coming years. Those 18 to 24 were even more pro-socialism than those 25 to 29, and ditto for young Hispanics and African-Americans, who constitute increasingly large percentages of the Democratic base, versus whites.

But to Under 30 voters, what does it even mean to be socialist? Given that no one under 30 was alive for the fall of the Berlin Wall, the Cold War s-word has no personal resonance. “I think it’s the idea that the government should guarantee that a baby who is born in a poor family has the same opportunities as a baby who is born in a rich family,” says Claudia Recchi, 26, a Forbes 30 Under 30 honoree, who in effect describes an egalitarian form of capitalism— the idea of a level playing field, versus a predetermined outcome.

Similarly, her peers cite free, guaranteed healthcare, tuition-free college and the need to attack climate change as other reasons to support “socialism.” Pretty much none cite nationalizing industries or confiscating wealth. Adds Recchi, the entrepreneurial cofounder of EdSights: “The idea of capping anyone’s wealth scares me.”

So why does her generation nonetheless embrace the word? First, because Sanders has done a masterful job over the past five years redefining it for those with no memory of the Soviet version, even as he foolishly handicaps himself with those who do.

Second, because those under 30 came of age after the financial crisis, incurring unprecedented college debt amid unabated wealth inequality, leaving them more skeptical of the current flavor of capitalism. They’re open to something different. “More citizens will be more sympathetic to a renewed social contract of sorts,” says Alexander Diaz, another Forbes 30 Under 30 honoree, who heads up crisis response at Google. As a child of Cuban immigrants who fled Castro’s regime, Diaz is the type who would have supported unfettered capitalism with zeal a generation ago.

Recchi, whose EdSights text-messaging chatbot platform supports and engages tens of thousands of college students each day, has a front-row view of how Gen Z’s brains are wired. Last week, she conducted a customer satisfaction survey, finding that her students were less motivated by the resources and prizes they gained than the chance to provide feedback to administrators. “Instead of having a single person in charge, Gen Z sees improving the communities they are a part of as a shared responsibility,” says Recchi. “This is true in the workforce, in households and in politics, too.” A collectivism that Sanders has turned into his Teflon among the young.

Marley Coyne contributed to this article.