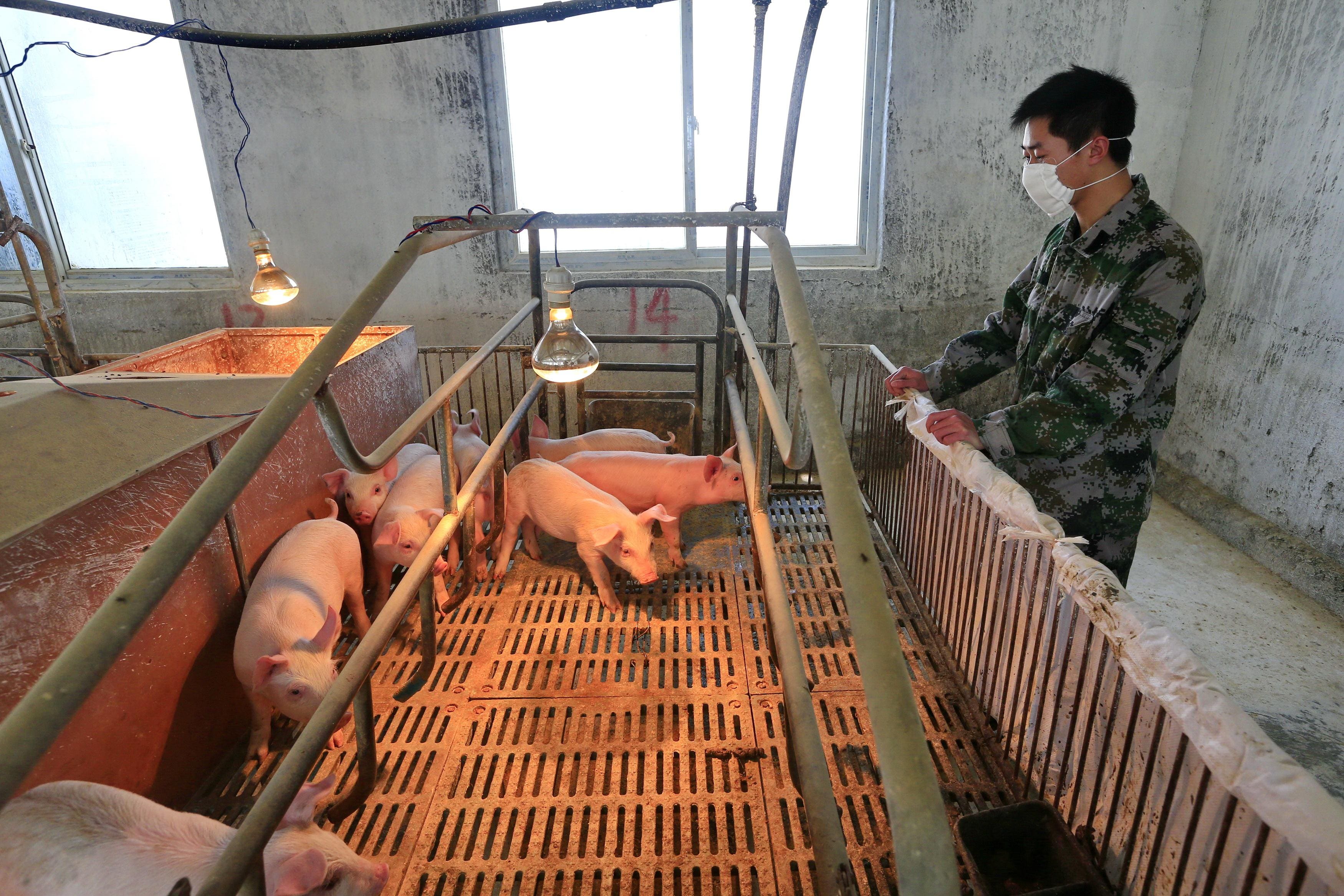 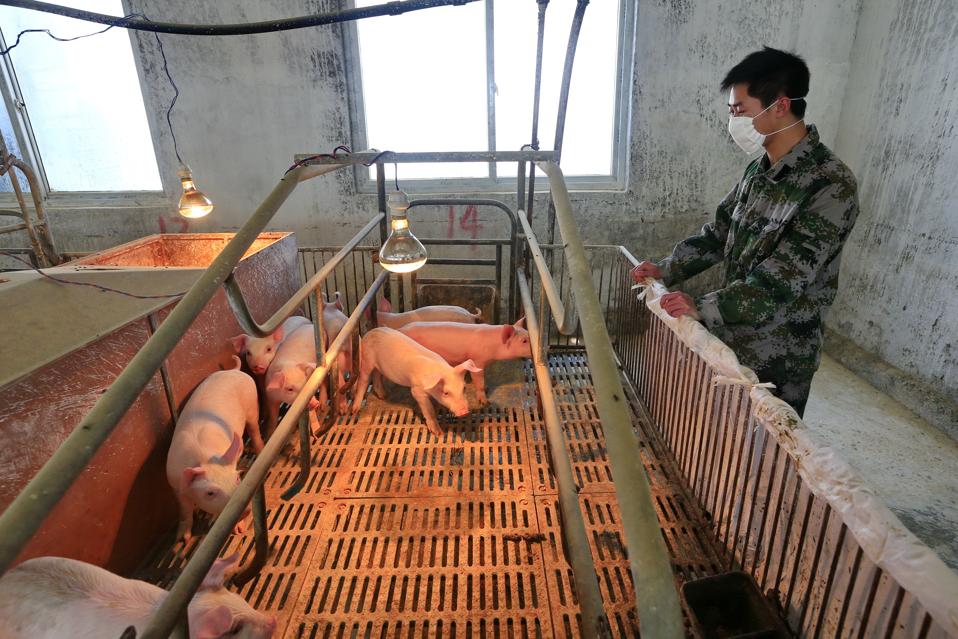 Scientists in China have found that the genotype 4 (G4) reassortant Eurasian avian-like (EA) H1N1 … [+] flu virus has been circulating in the swine population and has pandemic potential. (Photo: Feature China/Barcroft Media via Getty Images)

Want something to take your mind off of the Covid-19 coronavirus, the virus that’s causing the current pandemic? How about another virus, the genotype 4 (G4) reassortant Eurasian avian-like (EA) H1N1 flu virus? This virus, known as the G4 EA H1N1 flu virus for short, is relatively new, has been spreading among the swine population in China, and has, drum roll please, “pandemic potential.”

Yes, there’s yet another virus that could at some point possibly cause another pandemic. That’s based on findings from a team of scientists in China, who just published a set of studies in the journal Proceedings of the National Academic of Science (PNAS).

Does this mean that you’ll have to ask, “which pandemic are you referring to,” sometime soon? Could 2020 actually bring a second pandemic on top of the ongoing Covid-19 coronavirus pandemic? Two pandemics happening simultaneously would be quite the Bingo card entry for 2020. It would also require twice as many conspiracy theories to be circulated on social media, like 5G is somehow causing G4 too.

No need to panic right now. As I have mentioned before, panic is only useful at the disco. And so far, there are no signs that 2020 will bring a second pandemic. Or 2021 for that matter. Instead, consider the findings from the PNAS studies to be a bit of a warning, more like a “you’d-better-pay-attention-to-this-virus” warning. It’s also a “there’s-still-time-to-do-something-about-this-virus-because-other-things-have-to-happen-for-this-to-become-a-real-problem-for-humans” warning. Again this virus has pandemic potential, and potential can mean a lot of different things. An understudy for a major Broadway musical role has a lot of potential. So might someone who happens to sing a nice version of Lady Gaga’s Shallow and post it on YouTube.

While you typically want to encourage people to reach their potential, the same does not apply to viruses. The team of scientists from the China Agricultural University, the Shandong Agricultural University, and the Chinese Center for Disease Control and Prevention found that the G4 EA H1N1 flu virus is not quite in the pandemic big leagues yet. But this virus strain already has a number of the key “hmm” characteristics that could at some point get it there. Again they should make you go “hmm” rather then “oh bleep, I need to buy more toilet paper.” Here are the seven that were identified by the PNAS study:

Hmm Characteristic 1: The G4 EA H1N1 flu virus is already circulating among swine. In fact, it has become increasingly common among swine in China.

As I wrote before for Forbes, new is a relative term. A six-year-old work of art may be still relatively new. A six-year-old piece of sushi, not so much. This virus isn’t exactly a super new kid on the block. It’s been getting around and reproducing among the swine population in China for a while. The first part of the PNAS study found this out after tens of thousands of cotton swabs were stuck up the noses of swine in 10 different provinces of China over a seven year period. These samples as well as lung samples from swine were checked for the presence of various flu strains. From 2011 to 2013 the most common variant of the EA H1N1 flu virus was the genotype 1 (G1) strain. But mutations in this strain eventually led to the emergence of a genotype 4 (G4) variant. Every year since 2014, this G4 variant became more and more common eventually, surpassing its original G1 master to become the single predominant genotype of the EA H1N1 flu virus among the swine population in China. That may deserve an “oinks” with a “z” in front of it.

Here’s another thing that may earn a “zoinks. The second part of the PNAS study, a set of experiments performed in the lab, found that the G4 EA H1N1 flu virus can bind to human-like SAα2,6Gal receptors. This “SAα2,6Gal” may look like a strong password candidate but is actually the name of a receptor found on cells that line your respiratory tract. Think of such receptors as a docking station or a door handle to your cells. Binding such receptors could help the virus attach itself to and eventually get into your cells. 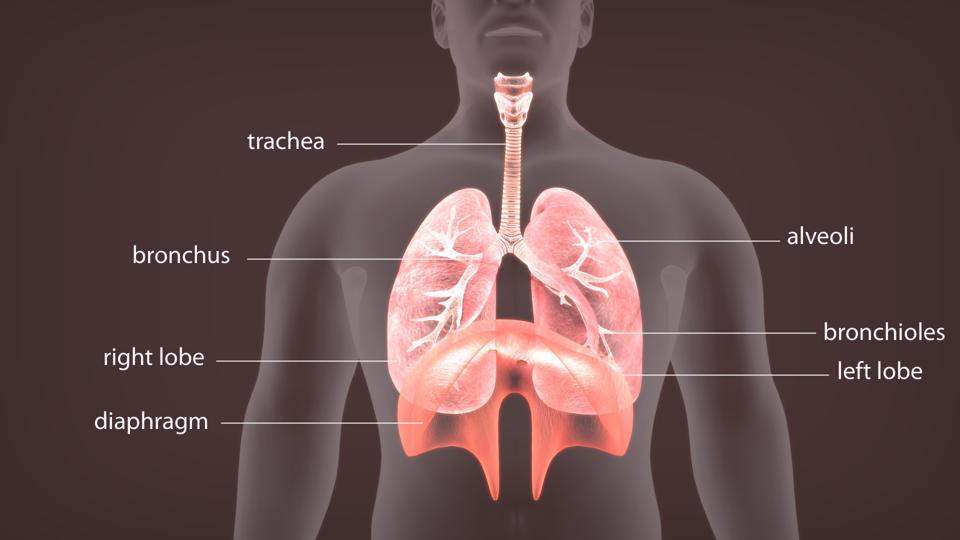 As can be seen in this illustration of the human lower respiratory tract, air that you inhale … [+] progresses down your trachea into your bronchi. from there, the air travels through your bronchioles until they reach your alveoli, which is where oxygen is delivered to your blood stream. (Credit: Getty Images)

The third part of the PNAS study showed that the virus can indeed attach itself to human cells. And not just random human cells like those in your armpit or on your big toe but cells that line your trachea. Of all the long snake-like things in or on your body, your trachea ranks pretty darn high. It is your windpipe, that tube that connects your upper respiratory tract with the lower part of your respiratory tract and your lungs. So if a virus can bind to the cells that constitute your trachea, it could subsequently make its way down into your lungs.

Binding to your respiratory tract cells doesn’t necessarily mean that it can get inside, infect, and reproduce inside them, right? After all, just because someone hugs the door handle to a cheap motel room, doesn’t mean that he or she has the keys to get in and do the nasty. Alas, the fourth part of the PNAS study took cells that normally line human bronchi and alveoli and successfully infected them with the virus in the laboratory. And yes the viruses “did the nasty” inside these cells, which means hijacking the cell’s machinery and using it to make many more copies of themselves quite readily.

Hmm Characteristic 5: Ferrets infected with the virus can spread the virus to other ferrets via either respiratory droplets or direct contact.

The fifth part of the PNAS study tried to “ferret out” whether the virus could be transmitted from one person to another. While you may not think of yourself as a ferret on most occasions, scientists often use ferrets to study the transmission of flu viruses in the laboratory. That’s because ferrets are similar to humans in how their lungs work, what receptors they have on their cells, and what symptoms they get when they are infected with the flu virus.

The fifth part of the PNAS study entailed first infecting a group of ferrets with the G4 EA H1N1 flu virus. Before the ferrets could say “dude, what the bleep,” they were placed in the same cage with other uninfected ferrets. Without any ferret social distancing, little ferret masks, or tiny bottles of ferret hand sanitizer involved, non-infected ferrets soon got infected, suggesting that the virus could be spread via direct contact.

Additional experiments placed infected ferrets in cages that were adjacent to cages with uninfected ferrets so that they could not have direct contact with but could still rudely cough towards the non-infected ferrets. (Ferrets are really bad at remembering to cough into their elbows.) This latter arrangement also resulted in uninfected ferrets getting infected, which implied that the virus could be transmitted via respiratory droplets as well.

Hmm Characteristic 6: The virus is different enough from the virus strains that are already in flu vaccines.

So this G4 G4 EA H1N1 flu virus can infect and reproduce in cells lining your lower respiratory tract. It can also help infected ferrets make other ferrets share in their misery. But at least the flu vaccine may offer some protection, right? After all, this is a flu virus as opposed to a coronavirus. Well, the sixth part of the PNAS study used assays to compare the proteins on the surface of the G4 EA H1N1 viruses with those of flu virus strains that normally circulate among humans. The result? They didn’t appear to be similar enough for the regular flu vaccine to protect against the G4 EA H1N1 flu virus. Thus, you would need a new flu vaccine to be developed to protect against the G4 EA H1N1 flu virus. Of course, developing a new flu vaccine that protects against this particular strain would not be nearly as a difficult as developing a new vaccine against a completely different organism like the severe acute respiratory syndrome coronavirus 2 (SARS-CoV2).

Hmmmmm Characteristic 7: The virus has already infected humans and seems to be more infectious than its predecessor.

Remember, just because the Covid-19 coronavirus pandemic is going on, doesn’t mean that other viruses are saying, “hey, humans are having a rough go at it right now, let’s give them a break. Let’s just hang out watching Netflix.” Nah, viruses all around the world will keep working, keep mutating, and keep reproducing because that’s what they do. And with the roulette wheel of mutations going round and round, every now and then a new type of virus will emerge that can jump from animals to humans and potentially spread from human-to-human.

Therefore, it’s not a matter of “if” but “when” the next pandemic will arise. This means that the world can’t get caught off guard as it did with this current Covid-19 coronavirus pandemic. Will the G4 EA H1N1 flu virus be the cause of the next big one? It’s still too early to tell as other things would still have to happen before such a virus could get its big break. For example, it would have to mutate to a point that it could spread from human-to-human. And it would have to be contagious enough to spread widely. And it would have to spread before a vaccine could be developed. Quite a few “ands.”

Nevertheless, the world has got to take every virus with “pandemic potential” more seriously and invest much more resources into tracking and studying each. You never know which virus with “pandemic potential” will just remain that way and which will end up fulfilling its “potential.” After all, a pandemic is like a relationship break-up. It doesn’t simply happen overnight. If you pay attention, there are warning signs, opportunities to intervene, that long predate the breakup or pandemic. Just look at a publication in the October 2017 issue of the PNAS that stated prophetically, “the tremendous pandemic potential of coronaviruses was demonstrated twice in the past few decades by two global outbreaks of deadly pneumonia.”