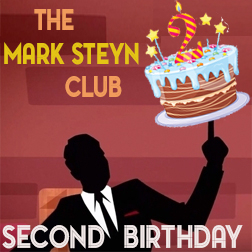 Today marks the first day of the third year of The Mark Steyn Club. As a result we had a very busy weekend at SteynOnline, with five posts on Sunday alone. My Saturday column looked at the state of Theresa May’s Conservative Party after Thursday’s local elections, and on Sunday we marked the fortieth anniversary of Mrs Thatcher’s arrival in Downing Street: Draw your own comparison. (Joe Biden can’t tell his Maggie from his May, but we can.) We’ll link to some of our other weekend attractions below.

This second birthday of The Mark Steyn Club is, as last year, not just a joyful celebration but a reminder of a very dark time in my life. We launched the Club just two months after CRTV breached my contract, fired me and left me holding the bag for a huge six-figure sum in production and payroll expenses. I didn’t think I’d survive. But I did – thanks to you. Two years on, Cary Katz and CRTV (now Blaze TV) continue to sue – they have three active cases against me currently, and have threatened a fourth. But in the end he’s just a bore who won’t bugger off. And he can sue as much as he likes, but this Club is here to stay.

We’re marking this second anniversary with a Royal baby, which the Duke and Duchess of Sussex have very sportingly agreed to name the Earl of Steynclub. Aside from that, there are a few other official observances to note:

*Many of you enjoy our nightly audio adventures – my readings of H G Wells, Jack London, Conan Doyle, Baroness Orczy, Kafka, Conrad and many more – but have been somewhat dissatisfied with the Tales for Our Time home page. So we’ve reconfigured it to a “tile” format, more like Netflix and the like, which we hope will make it easier for you to find your preferred audio entertainment of an evening. To see our new Tales for Our Time page, please click here – and do let us know what you think of it.

*Our Second Annual Mark Steyn Club Cruise has sold out! Sorry about that, but it’s not just the dearth of berths but the maximum seating capacity in the shipboard theatre from which we’ll be doing our watery Mark Steyn Shows. However, we’re pleased to announce our third cruise – and, after the Atlantic Seaboard and Alaska, we’ll be branching out and heading to the Mediterranean, which hopefully will be more convenient for our UK and European members. More details later this week.

*We’re also making some changes to The Mark Steyn Show – to whit, starting in the autumn, we’re going to be doing some shows in front of a live audience of Club members. It should be a fun night out, and, if you’d like to know about dates and locations, please email us and we’ll put you on the list. We’re pleased to report that our TV shows with Jordan Peterson, Douglas Murray and Lindsay Shepherd have between them stacked up a combined audience of over one million. That’s not exactly viral, and it’s not like the millions and millions of listeners and viewers I have when I guest-host for Rush or Tucker, but it’s surprisingly competitive with most US cable networks. And we think we can do even better with an audience of Steyn Club members in the room.

*We also supply more specialized content: I’m so pleased with the reaction to our monthly audio books and to our video poems. We’ll have more poetry and books and music in the year ahead, starting with an upcoming special, by request, of Music from Tales for Our Time. This website is about the big picture (Islam, demography, civilizational collapse) and the small pleasures (music and films and poems) in whatever form suits each subject: print, audio, video. For example, this weekend our marquee presentation was my ongoing serialization of H G Wells’ classic The Island of Dr Moreau: Click for Part Eight, Part Nine and Part Ten – or treat yourself to a good ol’ binge-listen and enjoy the lot, starting at the beginning, right here. Our Saturday movie date celebrated my favorite sequel title, and our Sunday song selection offered birthday tea for two. And, as promised, from the Steyn archives I welcomed Chuck Berry, Leonard Bernstein, Men at Work, Billy Bragg, Mary Martin, Julio Iglesias and more to talk about their nearly Number Ones. If you were busy impeaching Bill Barr over the weekend, I hope you’ll want to check out one or two of the foregoing as a new week commences.

But one thing we will never do is wall up our political content. As I wrote two years ago:

One aspect of the CRTV model I was never comfortable with was the subscription-only aspect. It was never meant to be part of the plan for The Mark Steyn Show. Indeed, the honcho who pitched it to me said that “Mark needs to be on TV at this critical time in history.” It’s a weird thing to be told that you need to be out there saving western civilization – but only for premium subscribers. Anybody in the ideas business wants their ideas out in the world, available to all and tested by all.

I felt that particularly strongly after taking part in last year’s Munk Debate before an audience of upscale leftie Torontonians on the subject of the “refugee” crisis afflicting the western world. I walked on stage at Roy Thomson Hall with my debating partner Nigel Farage (a few weeks before his Brexit triumph) to find the pre-show survey had almost 80 per cent of the crowd opposed to us. By the end of the night, Nigel and I had, by one of the biggest margins in Munk Debate history, persuaded a significant percentage of the audience to change its opinion – simply by stating the reality of the situation in a compelling and persuasive manner. That’s the key word: persuasion. And you can’t persuade people over to your side if you’re holed up behind a subscription paywall talking to people who already agree with you.

We’ve stayed true to that, and we now provide more free content than at any time in our sixteen-year history – columns and essays, SteynPosts and Mark’s Mailbox, On the Town and Song of the Week. That would not be possible without The Mark Steyn Club. So on this second anniversary I’m especially grateful to all our first-day Founding Members, beginning with a gentleman from small-town Idaho who signed up shortly after midday Pacific Time on May 6th 2017 and kicked off an avalanche of subscribers. I was stunned by your enthusiasm, and even more surprised as it grew in the ensuing weeks and months. My only regret is that we didn’t do this a decade and a half ago, and I hope to thank many of you personally on this September’s cruise. We’re thrilled by all the renewals from all over the map – from St Louis to the Solomon Islands …and Glenmaggie, Mullingar, Port Vila, almost every corner of the globe. If you’ve waited a while to join us to see whether we’re in it for the long haul, yes, we are – and membership does come with benefits:

*Exclusive Steyn Store member pricing on over 40 books, CDs and other products;

*The opportunity to engage in Clubland Q&A sessions with yours truly (our anniversary edition airs next week);

*Our monthly series of audio adventures Tales for Our Time. We started with my serialization of Conan Doyle’s timelier than ever Tragedy of the Korosko, and moved on through Scott Fitzgerald, Jack London, Conrad, Kipling, Dickens, Gogol, The Prisoner of Zenda, The Thirty-Nine Steps, The Scarlet Pimpernel and Dr Jekyll and Mr Hyde. You can either listen to an episode per night, as we aired them originally, or you can binge-listen to the lot on a long car journey;

*Transcript and audio versions of our video content: For those who find it less stressful not to have to look at me, we’re making The Mark Steyn Show available in non-visual form. If you go here, you’ll find that we’ve already posted audio episodes of every single SteynPost all the way back to the very first one, plus some of our long-form shows, which we’re also working our way through;

*Comment Club membership: you get to frolic and gambol through our comments section and take issue with me and my columns and radio shows and TV appearances. I weigh in there myself from time to time, but it’s essentially your turf where you get to take the rhetorical baseball bat to any cut of my jib that happens to rankle. There’s a lot of good stuff in there;

*My video series on classic poetry;

*The chance to join your fellow members on the third Mark Steyn Club Cruise;

*Advance booking for my live appearances around the world;

*Customized email alerts for new content in your areas of interest (arts, politics, culture, or the whole shebang);

*and, most importantly, the opportunity to support all our content, from the Big Picture stuff on Islam and climate change and civilizational collapse to the small pleasures of good conversation, great movies and live music.

To become a member of The Mark Steyn Club, or to sign up a friend, please click here. Thank you for a terrific and spectacular two years. There will be many more anniversaries to come.

On the Town
Non-Stop Nearly Number Ones

Steyn’s Song of the Week
Tea for Two