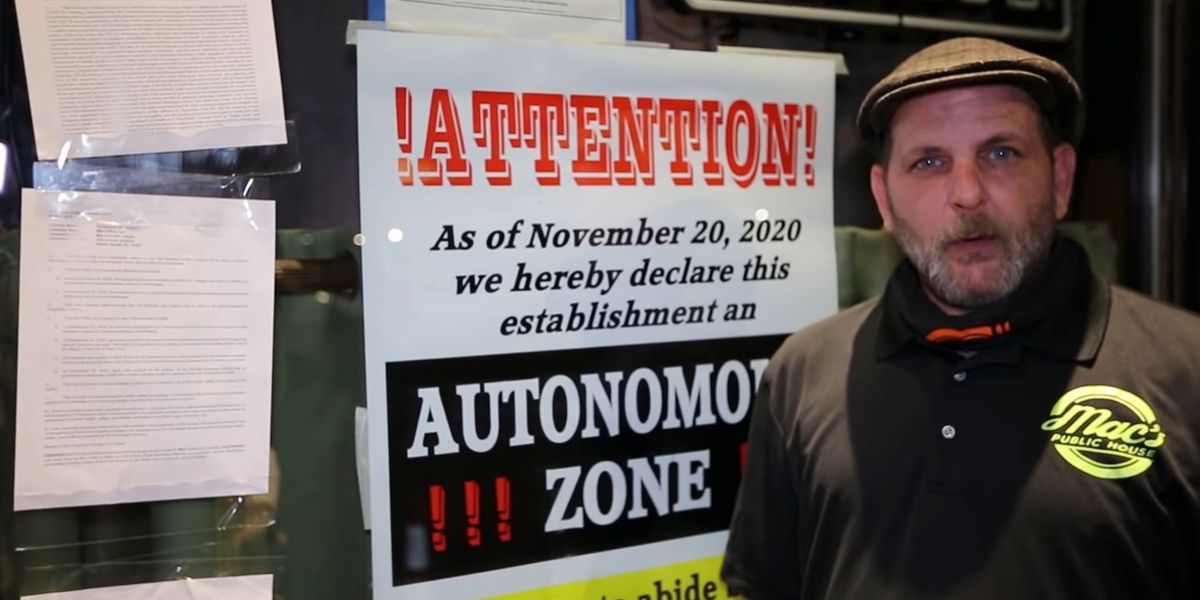 A Staten Island restaurant has declared itself an “autonomous zone” that is free from Gov. Andrew Cuomo’s business-killing coronavirus restrictions.

Beginning Nov. 20, Mac’s Public House, owned by Danny Presti and Keith McAlarney, said they would not abide by restrictions enacted by Cuomo or New York City Mayor Bill de Blasio. Their defiant stance came just days before new restrictions hit the area where Mac’s is located, which includes a ban on indoor dining at bars and restaurants, according to the New York Post.

The declaration that Mac’s is now an “autonomous zone” pays homage to the “Capital Hill Autonomous Zone,” which far-left radicals established in Seattle in June.

!ATTENTION! We hereby declare this establishment an !!!AUTONOMOUS ZONE!!! We refuse to abide by any rules and regulations put forth by the Mayor of NYC and Governor of NY State.

For their defiance, Mac’s has been “slapped with thousands of dollars in fines, a shut-down order from the state Health Department and the Friday revocation of its liquor license by the State Liquor Authority,” according to the Post.

But those consequences have not deterred Mac’s owners.

In a YouTube video, Presti explained the sheriff’s department is issuing his restaurant $1,000 fines, but said, “at this point, we’re OK with it, because we’re not paying it.”

To circumvent their business licenses being revoked, Presti said they are allowing patrons to eat and drink for free — while asking them for donations to stay afloat.

Meanwhile, McAlarney challenged Cuomo and “De Bozo” — a reference to de Blasio — to personally come to Mac’s to revoke their licenses.

He continued, “Or De Bozo, you want to come down here and pull the license off the wall? Feel free to end up comin’ down, and we’ll end up having a conversation before you even think about stepping foot on my property. I will not back down.”

However, keeping the restaurant’s doors opened does not mean Presti and McAlarney are being unwise. In fact, they are taking significant COVID-related precautions.

“We will still wear masks, take the same safety precautions we’ve had in place, maintain daily cleanings and work in a responsible manner to the best of our abilities,” the owners told the Staten Island Advance.

But, Presti explained, “What we will not be doing is living in fear. By fear, we mean the constant threat of our local city and state governments sending agencies in to check up, fine and threaten to shut us down. Every day small businesses are living in fear, not just of this virus, but that our governments will take our livelihoods away, even as we’re being safe.”