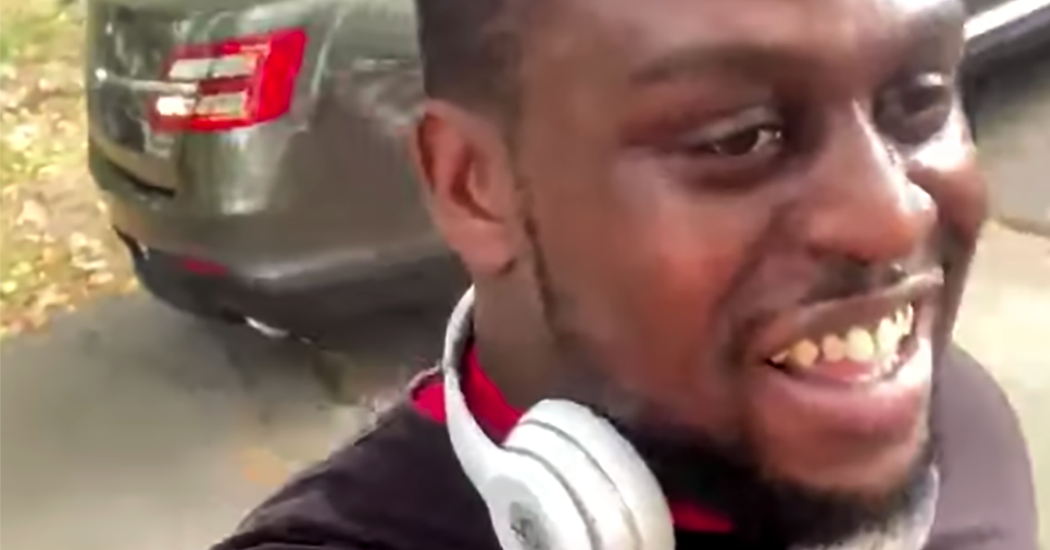 National and state officials are calling for an investigation after a Black jogger recorded himself being stopped and questioned by immigration agents this week in his Boston neighborhood.

The jogger, Bena Apreala, 29, was not arrested during the stop on Tuesday, but after his video was shared widely, lawmakers and officials condemned the encounter and called the footage disturbing.

Mr. Apreala, a Massachusetts real estate agent, told the Boston radio station WBUR that the men did not identify themselves as law enforcement and questioned him about his identity when they approached him.

“These guys just hopped out in full camouflage uniforms with masks over their face and stopped me,” Mr. Apreala said, according to the station, adding that the agents told him to identify himself. “I was confused as to whether or not they were even legitimate authority.”

He recorded the end of the episode in a short video — less than a minute long — that was later uploaded to Facebook. The beginning of the video shows at least three U.S. Immigration and Customs Enforcement agents letting Mr. Apreala go before asking him whether he had any tattoos on his arms — “just so we can confirm, and we’ll be out of here.”

In the video, Mr. Apreala asks the men: “Am I free to go? Do I have to show you? If I’m free to go, then I’m not showing you anything.” He then declined to show them his arms and walked away.

The episode took place in West Roxbury, a neighborhood of tree-lined streets and mostly single-family homes in the southwest corner of Boston.

The agents were in the neighborhood looking for a Haitian man who had previously been removed from the United States in 2008, ICE said on Friday. The man being sought has pending cocaine and fentanyl trafficking charges and he may have been residing in the area, the agency added.

According to ICE, the agents identified themselves as law enforcement when they approached Mr. Apreala, who the agency said matched the description of the man they were searching for.

“During the encounter, ICE officers determined the individual was not the subject of their investigation and that he did not have any additional information regarding their subject or his whereabouts and was free to leave the scene,” the agency said in a statement.

ICE has expanded its surveillance operations in at least nine cities, including Boston, that have refused to help with deportations.

The video of the incident drew reactions from local and state officials. Mayor Marty Walsh of Boston said on Twitter that the video was “extremely disturbing” to watch.

“Racial profiling and stops like these are wrong, unjustified, and will not be tolerated,” he wrote.

Matt O’Malley, who represents West Roxbury on the Boston City Council, called the encounter an “unlawful stop” and said that he would pursue the issue with federal representatives.

“We must understand what they were doing and rationale behind their deployment,” she said on Twitter.

Senator Elizabeth Warren of Massachusetts said that her office had reached out to ICE for more information.

“People are rightly terrified of ICE & this secrecy only makes things worse,” she said on Twitter. “I expect answers, & our local, state & federal officials do too.”

The A.C.L.U. of Massachusetts, which is representing Mr. Apreala, is also investigating the encounter.

“This incident raises serious constitutional questions and is disturbing on a human level,” Rahsaan Hall, director of the racial justice program at the A.C.L.U. of Massachusetts, said in a statement.

Mr. Apreala’s mother, Patricia Apreala, told NBC10 Boston, “I have too many videos running in my head about young Black males with law enforcement, and it was not a pretty sight.”

The encounter comes as policing and race have received more scrutiny after the killings of Black men by the police and others have ignited nationwide protests. On Feb. 23, Ahmaud Arbery, a 25-year-old Black man, was killed by armed white men as he jogged in his Georgia neighborhood.

In March, Breonna Taylor, a Black medical worker, was fatally shot by Louisville police officers during a botched raid on her apartment. George Floyd, a 46-year-old Black man, died on May 25 after being handcuffed and pinned to the ground by a white Minneapolis police officer’s knee. And in June, there was the fatal police shooting of Rayshard Brooks, a Black man who was found asleep in a car in a drive-through at a Wendy’s.