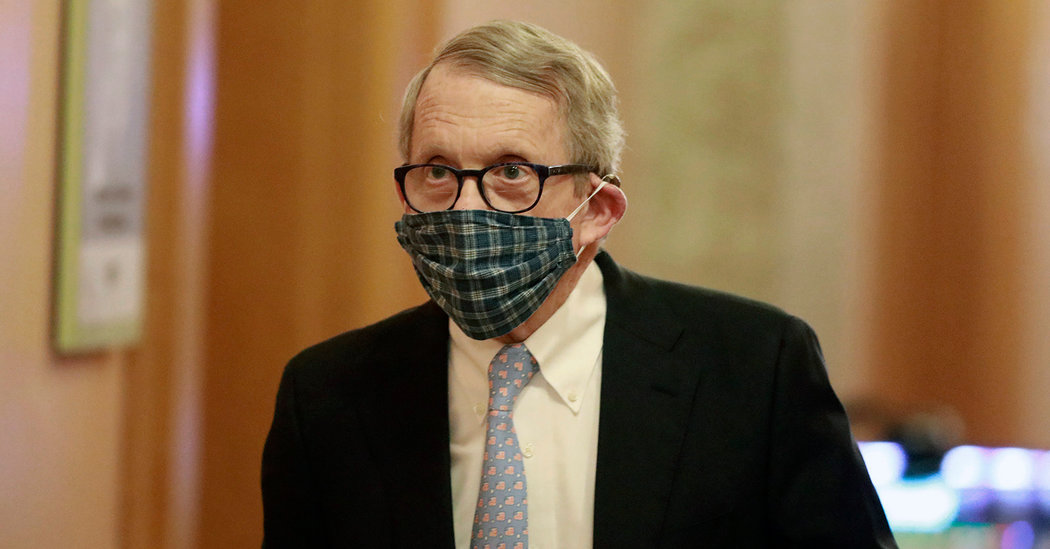 For 40 years, Mike DeWine rose steadily if blandly up the ladder of Ohio politics, finally landing his dream job as governor. He took office last year as a familiar figure in the state, not because of any indelible political identify, but because, at 72, he had been around forever.

But the coronavirus crisis has made Mr. DeWine something that decades in elected offices never did: a household name. A Republican, he took early and bold actions to lock down his state, even as the head of his party, President Trump, dismissed the threat of the pandemic.

Mr. DeWine’s decisiveness — closing schools before any governor in the country, postponing the state’s March 17 primary election to protect voters — sent his popularity soaring. The folksy governor, previously best known for an annual ice cream social at his rural home, became something of a cult figure on social media. Ohioans tuned into his five-day-a-week briefings to celebrate “Wine With DeWine,” a ritual whose motto is “It’s 2 o’clock somewhere.”

Now, Mr. DeWine is charting a way out of the shutdown, taking cautious steps while facing pressure from business leaders, conservative activists and some Republican lawmakers who vociferously question the economic costs of a state in quarantine.

Seven weeks into the crisis, Mr. DeWine is being guided by health experts while avoiding partisan fissures over stay-at-home orders that have been encouraged by Mr. Trump, who hopes a rebounding economy will carry him to re-election. The Ohio governor is the rare Republican official who does not automatically fall in step with Mr. Trump, an independence he shares with two other Republican governors, Larry Hogan of Maryland and Charlie Baker of Massachusetts, both of whom lead solidly Democratic states where bipartisanship is needed to survive. Unlike them, Mr. DeWine has gone his own way in a red-hued state.

He also split decidedly with Mr. Trump by encouraging a nearly all-mail primary election on Tuesday. While the president has spread the false claim that voting by mail entails “a lot” of fraud, Mr. DeWine pushed universal absentee ballots for voters’ safety. Ohio’s secretary of state on Monday called the effort a success, with nearly 1.5 million mail ballots cast.

Mr. DeWine also relaxed stay-at-home orders on Monday, announcing that some nonessential businesses could begin to reopen, even as he imposed new restrictions to prevent the spread of the coronavirus.

Beginning May 4, the governor said, manufacturers, offices and construction businesses can reopen, followed on May 12 by retail stores and service businesses. Masks will be required indoors in workplaces as well as six feet of separation. “No mask, no work, no service, no exceptions,” Mr. DeWine said.

Some enterprises that are not on the list to reopen: hair salons and restaurants. “People want to get a haircut, people want to go back to restaurants,” the governor said. “All those things we’re anxious to do as well, but we’ve got to see how we’re going with these numbers. We’ve got to watch it for a few weeks.”

Mr. DeWine has pledged that testing for the virus will ramp up sharply, to 20,000 per day by late May from about 7,000 per day now.

With the Democratic presidential race effectively over, the most watched races of Ohio’s rescheduled primary are two Democratic congressional contests: one near Cincinnati for a Republican-held seat that Democrats see as a pickup opportunity, and one in Columbus, where Representative Joyce Beatty faces a challenge from her left by Morgan Harper, who is backed by national progressive groups.

Before Mr. DeWine made his reopening announcement, more than 30 Republicans in the State Legislature called for an immediate end to the shuttering of all businesses, stating, “We believe it is time to trust Ohioans.”

Larry Householder, the Republican speaker of the House, said his caucus felt “disrespected” by the governor. He criticized Mr. DeWine for not letting small retailers open before May 12, while national chains have been designated essential and are open. “There is a tremendous amount of frustration from the majority members in the Ohio House,” Mr. Householder said in a statement.

In a poll of Ohio voters released on Monday, 35 percent of Republicans said they were worried that the United States would take too long to loosen restrictions and that the economy would spiral further downward, compared with 14 percent of Democrats.

The poll, by Baldwin Wallace University, also showed overwhelming support for the governor. Eighty-five percent of respondents approved of his handling of the coronavirus, 89 percent said they trusted him as a source of information about the outbreak, and three out of four said he was doing a better job than Mr. Trump.

Mr. DeWine’s data-driven response to the outbreak has won the support of top Democrats in the state. Many have praised his management style — honed over a lifetime of serving in all levels of government — as a departure from that of the president, who quixotically says to social distance one day and to ignore it the next.

A week earlier, on NBC’s “Meet the Press,” Mr. DeWine seemed to go out of his way to flatter Mr. Trump, saying that Ohio’s May 1 date to begin reopening was “consistent — very, very consistent — with the plan, the very thoughtful plan that the president has laid out.”

Despite efforts not to antagonize fellow Republicans, Mr. DeWine has faced pressure from multiple quarters. He declined to be interviewed for this article.

A Republican-led task force on the shutdown in the state’s House of Representatives has been a forum for criticism of the governor. Among the accusations are that unemployment benefits keep workers from returning to jobs. Conspiracy theories have also circulated unchecked in the task force’s online hearings, including that the official death toll is inflated and that Mr. DeWine shut down the economy to hurt Mr. Trump’s re-election chances.

Such views are echoed by protesters outside the Capitol in Columbus, including a group whose zombielike faces, pressed against glass doors, were captured in a photograph that ricocheted around social media.

Last week, Mr. DeWine publicly condemned a Republican state senator who had likened the actions of the director of the Ohio Department of Health, Dr. Amy Acton, who is Jewish, to Nazis during World War II.

Jai Chabria, a Republican strategist in Ohio, said Mr. DeWine’s approval ratings were high because he was listening to medical experts and ignoring political critics.

“I don’t think anyone can ever question Mike DeWine’s patience or ability to withstand criticism,” said Mr. Chabria, who was a senior adviser to Mr. DeWine’s predecessor, Gov. John Kasich, also a Republican. “He doesn’t get caught up in the Twitter games that other politicos like to play.”

Protesters and Republican lawmakers have apparently weighed less heavily on Mr. DeWine’s decision to reopen than Ohio business organizations. Last week, six groups, including the Ohio Manufacturers’ Association and the state’s Farm Bureau, called the state of the economy “dire” and said it was facing “irreversible devastation.” Nearly one million jobs have been lost. The groups pressed the governor to reopen the economy in a “phased approach,” which is what Monday’s orders entail.

In the Kasich years, Mr. DeWine served as attorney general, his sixth job in public office since 1976, after being elected a county prosecutor, a state senator, a congressman, lieutenant governor and U.S. senator.

He lost the Senate seat in 2006 to Mr. Brown, and in the succeeding years he tacked right. He renounced earlier support for a ban on assault weapons. In the 2012 presidential race, he withdrew an endorsement of Mitt Romney to instead back Rick Santorum. As attorney general, he represented the state against a gay resident of Cincinnati, Jim Obergefell, in the landmark Supreme Court case that legalized same-sex marriage in 2015.

Mr. Trump’s easy victory in Ohio in 2016 seemed to confirm that suburban Republicans of the Kasich brand were being run out of town by rural populists, many of whom had once voted for Democrats.

In Mr. DeWine’s first year in office, he was often overshadowed by conservative majorities in the Legislature. He signed a bill in 2019 banning abortions after a fetal heartbeat is detected, a decade-long goal of lawmakers on the right that Mr. Kasich had thwarted. After a mass shooting in Dayton the same year, Mr. DeWine watered down a proposed background check for gun buyers after facing pressure from pro-gun advocates.

“The dominant force in the last year has not been Mike DeWine, it’s been the Statehouse,” said David Pepper, the chairman of the Ohio Democratic Party. “Until coronavirus, DeWine was somewhat in the back seat of Ohio governance.” Now, Mr. Pepper said, the governor is at the wheel. “I’ve respected his approach from the beginning because he’s allowed the science and health experts to lead his response,” he added.

Every morning at 11:30, Mr. DeWine holds a conference call with the mayors of Ohio’s seven largest cities, all Democrats. Mayor Nan Whaley of Dayton, one of those on the call, said there was probably no other state where a Republican governor had worked as well with Democratic mayors. “It’s so refreshing — it’s how governing should work,” she said. “That’s a testament to DeWine, really.”