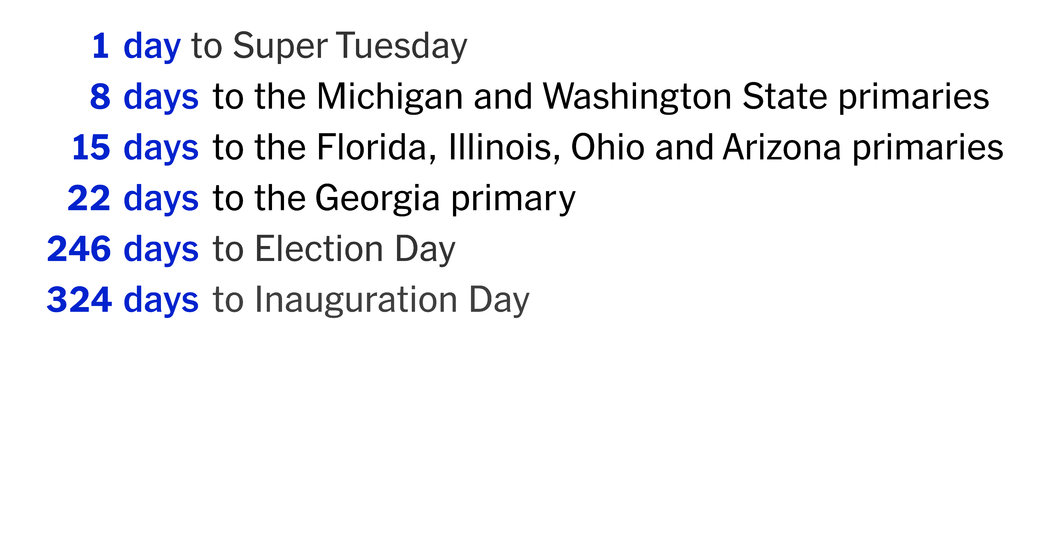 Pete Buttigieg’s campaign canceled a get-out-the-vote rally in Dallas on Sunday as Mr. Buttigieg prepared to drop out of the race.

A new lease on life for Biden? Things sure feel different.

Our colleague Katie Glueck has been traveling with Biden for months. In the earliest voting states, when he was still perched at the top of the polls, he often failed to excite a passionate base of support. But with the campaign shifting southward, starting with the South Carolina primary on Saturday, Biden’s campaign has taken on a new life — and his events have reflected that, Katie says:

Joe Biden often drew small, subdued crowds as he campaigned in the heavily white states of Iowa and New Hampshire, where party activists were turned off by his shaky debate performances, weak campaign organization and meandering campaign trail appearances.

But many African-American voters, especially older voters, feel a deep affinity for Barack Obama’s vice president, and his larger and more enthusiastic crowds in the more diverse states where he has campaigned recently have reflected that affection.

A businessman by trade, Michael Bloomberg managed to serve three terms as mayor without ever becoming particularly comfortable on the campaign trail — or on the stump.

As a presidential candidate, his strategy has centered on the airwaves: He has bought over half a billion dollars’ worth of ads across the country, even in early states where he didn’t compete.

Our reporter Jeremy W. Peters just published a story about Bloomberg’s efforts to punch up his savoir faire over the past few months. His aides have had to remind him not to roll his eyes at his opponents during debates, and not to fight back when he’s heckled at an event.

One of Jeremy’s observations that didn’t make it into the story: At Bloomberg events, attendees receive swag and special treatment unlike anything offered by other campaigns. But if a candidate lacks charisma, it can be hard to make up for it.

There is some irony to the fact that Bloomberg is not working harder to blow voters away. His campaign, after all, is running a highly curated, aim-to-please experience. It’s just that the candidate doesn’t always cooperate.

Bloomberg rallies are the closest thing voters will find on the campaign trail to a full-service banquet. There are catered spreads: fig scones and organic coffee in the morning; brisket, pulled pork sliders and crudités later in the day.

The staff watches over the crowds with the attentiveness of a hotel concierge. They open car doors and are at the ready with an umbrella if it’s raining. They are always checking if you need another “Mike 2020” pin: pink, blue, green, white? Maybe an extra T-shirt? One with a more generic “Mike Bloomberg 2020” slogan or a more locally tailored “Tennessee for Mike” one, perhaps? Another size? They stock XS to XXXL.

Then again, sometimes it feels as if this may all be a form of compensation for a candidate who falls short in the charisma department.